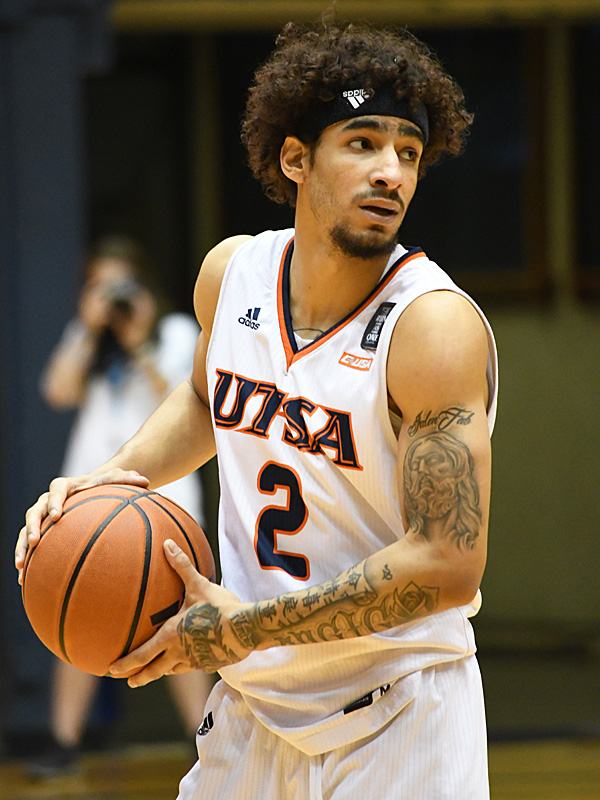 Jhivvan Jackson and the UTSA Roadrunners have started to click offensively — and just in time. The Conference USA tournament starts next week in Frisco. — Photo by Joe Alexander

In the past, when the UTSA Roadrunners have faltered, indecision has often haunted the offensive execution. On plays that required a split-second decision on whether to shoot, drive or pass, a glitch of some sort has materialized.

The play, in many cases, has suffered a timing-related break down. Lately, by contrast, the offense has flowed as freely as ever.

During the team’s past two games against the UAB Blazers and the Southwestern Adventist Knights, the Roadrunners have averaged 104.5 points on 61.4 percent shooting from the field. The team’s assist to turnovers ratio is an eye-popping 3-1, based on 51 assists and 17 turnovers in the two games combined.

Granted, the Knights were out-sized and out-matched athletically by the Roadrunners Thursday night, when the Roadrunners rolled, 123-43. At the same time, UTSA executed nearly as well on Feb. 27 against the Blazers, who rank among the best teams in Conference USA.

The groove, for UTSA’s offense, is unmistakable leading into next week’s C-USA tournament at Frisco.

“It’s such a good feeling, knowing that everybody can step up at any moment,” UTSA forward Adrian Rodriguez said. “What I enjoy the most out of that, is that we all trust each other. You know, we trust each other to make that extra pass. To give the ball to the man that’s open. Whenever we need it. And everybody makes plays. The right plays. Especially recently. The most recent games.

“The ball movement is beautiful. With great shots. That shows that you can trust each other.”

UTSA’s offense hasn’t always been beautiful during the team’s 9-2 streak over the past seven weeks. Occasionally, an opponent’s heightened defensive effort will create a whole lot of ugly over a 40-minute stretch.

For example, the UTEP Miners clamped down on the Roadrunners on Jan. 30 in El Paso. The Roadrunners shot 29.5 percent from the field, while the ball movement disappeared, in a 69-51 loss.

The same thing happened to the Roadrunners at home on Feb. 26. The Blazers applied sort of a soft backcourt trap and caused all sorts of problems, leading to 19 UTSA turnovers and 38 percent shooting. UAB, predictably, won in a 64-57 battle.

Other than those two games, though, the Roadrunners’ offense has looked as formidable as it has in UTSA coach Steve Henson’s five-year tenure.

During the 11-game stretch, UTSA’s ball handling has produced seven games in which assists have out-numbered turnovers. Not coincidentally, the team went 7-0 in those games. When the ball movement produced double-figure assists, the Roadrunners were 8-1. Six times, all of them victories, UTSA shot 50 percent or better from the floor.

Given the extended track record, it seems to indicate that the Roadrunners have played well enough over time to inspire a belief that they can make a run, when the tournament opens next Wednesday, March 10, at The Star. UTSA coach Steve Henson expressed optimism leading into next week.

“We’ve been talking about that for several weeks,” Henson said. “We wanted to play that Charlotte weekend. We got those games snowed out. Didn’t play particularly well the first night against UAB. We played much better the second night. So I didn’t think there was any setback mentally, from where we were at, at that point.

“Again, we’ve had some good stretches in practice. The ball movement and the trust level is at the highest it’s been all year, in terms of trusting teammates to make plays. So, I like what we’re doing on the offensive end.”

Over the past few days, the coach talked to players about ramping up intensity on the defensive end.

“Just (in) doing the right things, talking,” he said. “Just a little more edge to it. We got three and a half (or) four more opportunities to do that. Friday, Saturday, Monday and Tuesday. So, I hope our guys will respond the right way in practice.”