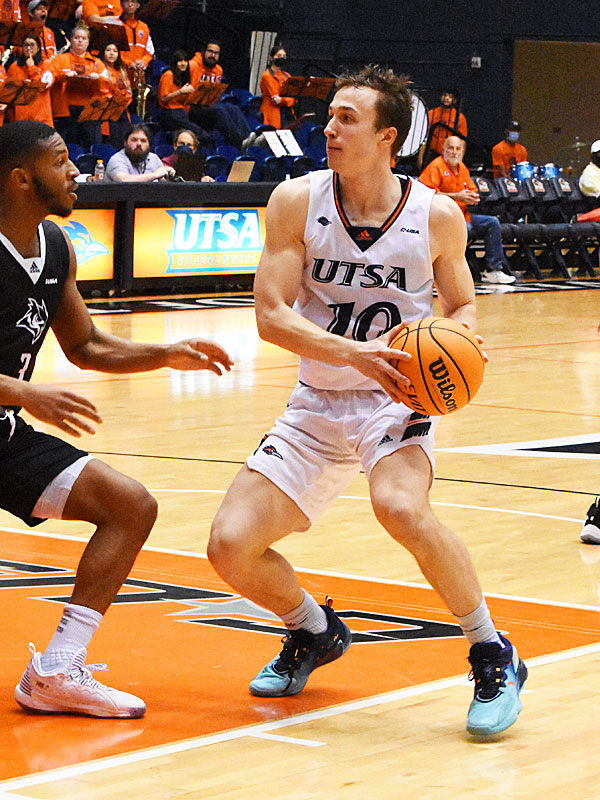 Erik Czumbel scored eight of his career-high 22 points in the final 3:42, leading the UTSA Roadrunners to an 81-72 victory over the Rice Owls at the Convocation Center. UTSA plays Southern Miss on Tuesday night in Frisco at the the Conference USA tournament. – Photo by Joe Alexander

With the Rice Owls mounting a comeback in the second half, somebody on the UTSA Roadrunners needed to step up with a big effort in the final regular-season game.

Erik Czumbel and Dhieu Deing answered the call in leading the Roadrunners to an 82-71 victory Saturday afternoon at the Convocation Center. 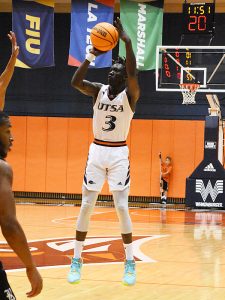 Dhieu Deing scored 19 points and drilled two key three-pointers in the second half after Rice had trimmed the lead to one. – Photo by Joe Alexander

Czumbel scored a career-high 22 points and Deing had 19 to help the Roadrunners break a three-game losing streak and build some momentum for next week’s Conference USA tournament.

“Feels great, man,” Czumbel said. “Third (game) in a row here (at home) and finally we get the dub. Everybody is so excited in the locker room. We just got to keep building on this.”

Deing had 16 points after intermission, including a pair of 3-pointers after Rice had trimmed UTSA’s lead to one.

Czumbel finished off the Owls with eight points and a key defensive stop in the final 3:42.

Securing their first victory since Feb. 17 at Southern Miss, the Roadrunners also had major contributions from Isaiah Addo-Ankrah with 14 points and Jacob Germany with 13.

Germany kept the Owls honest with his play in the paint and in the mid-range game, while Deing knocked down five of UTSA’s 13 3-pointers. Addo-Ankrah also hit four and Czumbel three from long range.

It was quite the turnaround from Thursday night, when the Roadrunners made only one three in a 59-48 loss to North Texas. 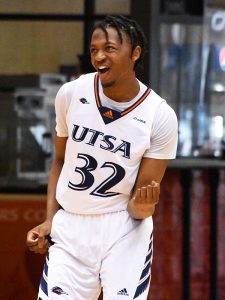 “We were so much better,” Henson said. “Shot a good percentage. Made threes. Shot a good 3-point percentage. That was terrific. Certainly, it makes it a lot easier. I was proud of the way we defended, too.”

On Feb. 3, in a game at Houston, the Owls shot 62 percent from the field as a team and rolled to a 91-78 victory over the Roadrunners.

In that game, center Max Fiedler and guards Carl Pierre and Travis Evee scorched the Roadrunners by combining for 57 points on 22 of 34 from the field. On Saturday afternoon, in San Antonio, those same three had a combined 37 on 13 of 25.

UTSA will open play in the C-USA tournament on Tuesday at 7 p.m. against the Southern Miss Golden Eagles. With a win, the Roadrunners would advance to play Florida Atlantic on Wednesday at 8:30 p.m. All games are at The Star in Frisco.

The Roadrunners will need to win five games in five days to claim the title and a bid to the NCAA tournament. 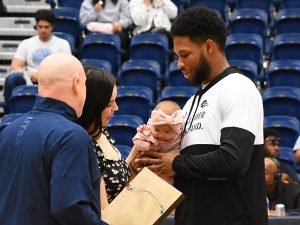 “This just boosts our confidence,” Czumbel said. “We can do it. We know it. We just got to keep playing the way we did today. Especially on defense. That was our biggest concern coming into this game, and we proved we can be a good defensive team.”

In November and December, Czumbel was not among the team’s primary offensive weapons. In his first 11 games, he took only 24 shots and hit six of them. He was 0 for 10 on 3-point shots until making his first trey on Jan. 3.

Lately, with Jordan Ivy-Curry having left the team to enter the transfer portal, the native of Vernona, Italy, has played a much more expansive role. Against Rice, he ran the point most of the afternoon, and he also hit eight of 16 from the field and three of eight from beyond the arc.

“My teammates kept telling me to be agressive,” he said of his offensive output. “It feels great, you know. It’s been a long year. I didn’t start the year shooting well. You know, just keep working on it and keep my confidence up.”

UTSA started the afternoon’s proceedings with a spontaneous dunk contest in what usually is a standard layup line.

Both McNeill and Ford started and contributed to a 12-point lead in the game’s first six minutes, and, ultimately to a 40-34 lead at intermission.

Offensively, it may have been one of the Roadrunners’ best halves in weeks. They shot 48.4 percent from the field. They had seven assists and 15 made field goals. They also hit six 3-pointers, including three of them by sophomore Addo-Ankrah.

The victory temporarily eased the pain of a tough season for the Roadrunners, who have produced only a 4-17 record in their last 21 games. UTSA has lost four players during the course of the season. In the second half, they lost two starters — power forward Cedrick Alley Jr. to academics and Ivy-Curry to the transfer portal.

Rice has lost six of its last seven games. The dropoff coincides with the loss of all-conference guard Quincy Olivari, who had 12 points and 13 rebounds in a 91-78 victory over UTSA on Feb. 3. Olivari broke his wrist on Feb. 5 and is out for the season.

UTSA leads Rice in the all-time series, 11-8. In games played as foes in Conference USA, UTSA leads 7-6. The Roadrunners have won seven of eight meetings against the Owls in San Antonio. Rice’s only victory at the Convocation Center came in 2015 in a 76-74 decision.

UTSA will face No. 7 seed Southern Miss on Tuesday at 7 p.m. at The Star in Frisco on ESPN+ and Ticket 760 AM.