Texas A&M-Commerce wins at the buzzer at UTSA. Here are the final plays. A Jordan Ivy-Curry three ties it with four seconds left. A&M-Commerce answers with a three at the other end, by Alphonso Willis, to secure a 65-62 victory. https://t.co/hyCDEtJ4sq pic.twitter.com/aiBAJpMIVv

Senior guard Alphonso Willis hoisted a three-pointer off the glass at the buzzer to lift the NCAA Division II Texas A&M-Commerce Lions to a 65-62 victory over the Division I UTSA Roadrunners Monday night at the Convocation Center.

Willis’ heroics came just moments after Jordan Ivy-Curry tied it for UTSA. Ivy-Curry buried a three with four seconds left to make it 62-62.

After the Lions pushed the ball upcourt, Willis fired over a couple of opponents to win the game. The Lions promptly rushed off the bench and mobbed Willis, piling on top of him in a wild celebration on the Roadrunners’ home court.

As the Lions continued their scrum, video shows one player with his head cocked back, his fists clenched at his side, screaming to the rafters.

UTSA 1-2
A&M-Commerce 0-0
Note: game counted as an exhibition for the Lions

For the Roadrunners, the loss to the Lions stung. It was UTSA’s first stumble at home to a sub-NCAA Division I program in three years, since it lost 77-76 to Division II St. Edward’s in the 2018 season opener. 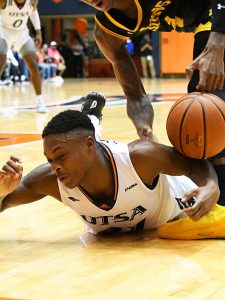 UTSA guard Jordan Ivy-Curry battles for a loose ball against Texas A&M-Commerce. He finished with 13 points – Photo by Joe Alexander

Worse yet, they were on the brink of a victory, and let it slip away. The Roadrunners held a seven-point lead on a Dhieu Deing drive with 14:27 remaining. They were up by six with 4:33 left.

And yet because of poor execution down the stretch, including a technical assessed for calling a timeout when they didn’t have any left, they lost a game they should have won.

After Ivy-Curry’s shot tied the game, UTSA coach Steve Henson said his players were in the right positions to defend the last play.

“You just got to stay between them and the bucket,” he said. “We did, and they heaved it from almost half court and it went in. Heartbreaker. Heartbreaker. So many plays prior to that. Shouldn’t have been in that position.”

Henson said the Roadrunners are struggling to run good offense.

“In the end, you got to convert and make open shots,” he said. “We had some looks, but, we’re just not moving the ball quickly enough. It’s not out of selfishness. We’re just not clicking on all cylinders. We’re still trying to figure it out.” 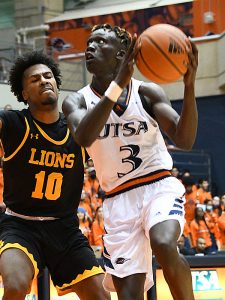 Dhieu Deing led the Roadrunners with 16 points and nine rebounds. Deing was 6 of 19 from the field. – Photo by Joe Alexander

With Clashon Gaffney controlling the paint, the Texas A&M-Commerce Lions led for much of the first half, only to give way at the end of the period to the Roadrunners, who started to execute at a higher level en route to a 31-29 edge at intermission.

The Roadrunners opened the season last Tuesday with a 97-66 home victory over Division III Trinity University. UTSA shot 47 percent from the field to blow out the Tigers.

On Friday, UTSA was blown out 96-44 on the road at Division I power Oklahoma. The Roadrunners shot 22.7 percent from the field, just off the school record for the lowest number in school history.

Against A&M-Commerce, the Roadrunners hit only 40 percent from the floor, including 36.4 percent in the second half. Underscoring problems with ball movement and rhythm, UTSA compiled only nine assists against 17 turnovers.

Guard KJ Hunt scored 22 points and forward Michael Henn added 20 as the University of Denver Pioneers downed the IUPUI Jaguars 63-47 on Monday afternoon in the opening game of a UTSA multi-team event at the Convocation Center.

B.J. Maxwell scored 14 for IUPUI, the acronym for Indiana University-Purdue University at Indianapolis.

Steve Lutz, a 1991 East Central High School graduate, is in his first season as head coach at Texas A&M-Corpus Christi. Lutz has been a long-time Division I assistant with stops at Incarnate Word, Stephen F. Austin, SMU, Creighton and Purdue. At Creighton, he helped develop scoring whiz Doug McDermott, who now plays with the Spurs. Lutz spent his last four seasons at Purdue.