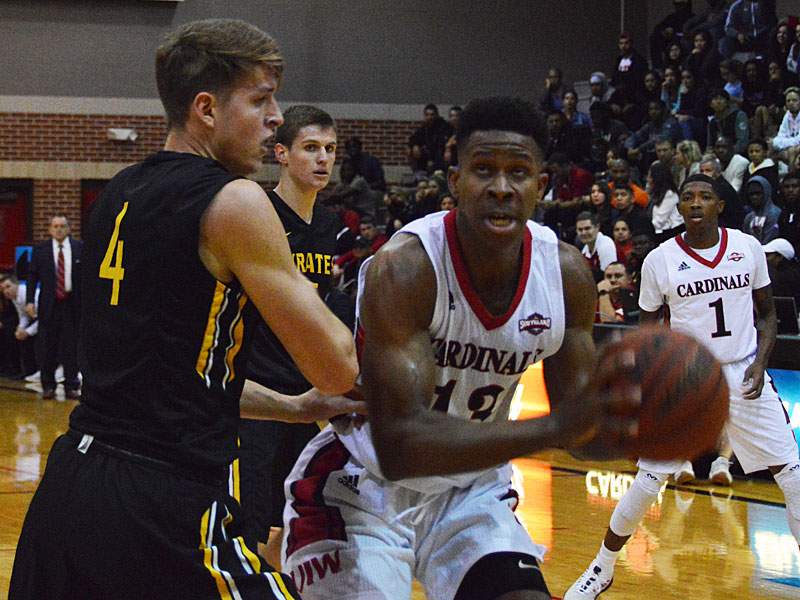 By Jerry Briggs
For the thejbreplay.com

A few pressing questions loom for fans of the Incarnate Word Cardinals in the wake of Friday night’s 87-71, season-opening victory over the Southwestern Pirates.

First of all, when will the 3-pointers start to fall for a program that is traditionally one of the best long-distance shooting teams in the Southland Conference?

Next, and maybe most intriguing, how can the media accurately describe the dancing style of junior power forward Charles Brown III?

“You’ll have to ask him,” UIW guard Sam Burmeister said. “Go interview him and tell him that Sam said to do a dance move for you.”

By the time Burmeister released that news bulletin, Brown had left the building.

So, it will be a question for another day.

But Burmeister confirmed that the newcomer from New Orleans, who battered the Pirates with 24 points and 13 rebounds, likes to keep things loose in the locker room.

“Off the court, he’s one of the nicest guys,” Burmeister said. “He’s also a huge jokester. He dances. He loves to dance. He’ll dance for the whole team, and he’s always smiling.

“But when he gets in the game, he plays hard. He practices tough. He’s a bully inside. That’s what we need him to be.”
While UIW hit only 1 of 13 from long distance against the NCAA Division III Pirates, the inside scoring proved to be more than adequate.

As a result, the Division I Cardinals were never seriously threatened, even though the Pirates scrapped and battled and stayed within four points at halftime.

In the second half, UIW played much better, running up leads as large as 22 points late in the game.

“The most important thing is, we got the (victory),” Brown said. “We started out a little shaky in the first half but we picked it up in the second.

“As you see, we expanded the lead, we rebounded well, we passed the ball well. We shared. We played off each other. We played as a team.”

UIW continues a season-opening three-game homestand on Monday against Trinity.

By then, Cardinals coach Ken Burmeister undoubtedly will have explained how the Cardinals must start to do a better job in getting loose balls.

“We only scrimmaged UTSA (in the preseason),” the coach said. “We tried to get another game, but we couldn’t pick one up. I think if we had had a few more scrimmages, I think we’d have been smoother. We weren’t real smooth.

“Now we’ve seen some things we can work on. Let’s move on.”

Southwestern played with great effort, at one point holding a 39-30 edge on the boards against a bigger team with 11:35 left in the game.

Eventually, the Cardinals picked it up but the Pirates still won the battle on the glass, 48-42. Individually, Luke Hicks and Brandon Alexander scored 13 points apiece for Southwestern.

“Pretty scrappy,” Sam Burmeister said, acknowledging the effort by the Pirates. “They hit some tough shots. But we still finished out with the win.

“We couldn’t have asked for a better start,” he added. “Some of the players had some jitters, you know, first game of the season. But (in the) second half we settled in and played our basketball. Finished out with a win.”

Burmeister hit the only 3-pointer of the night for the Cardinals, who led the Southland with a 38.8 percentage from beyond the arc last season.

“We shoot it a lot better in practice,” he said. “The next few games, I expect our shooting percentage will go up tremendously. I know I missed a couple of shots I should have made. All the players. We make those shots every day in practice.

“It just wasn’t our night, shooting wise. But we fed it inside and our bigs carried us.”