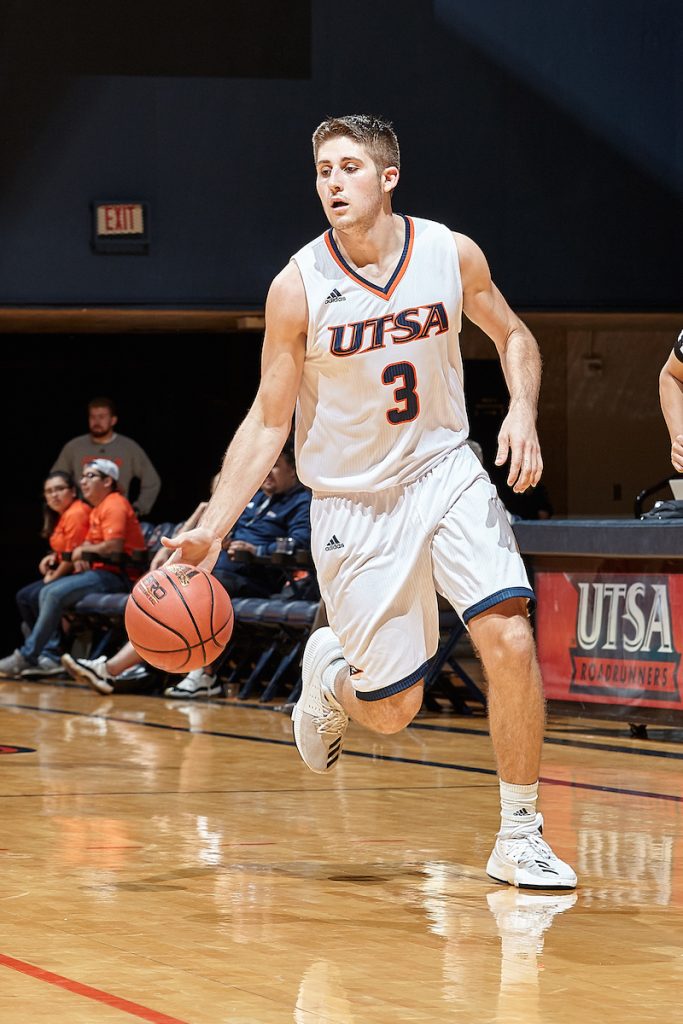 Sophomore forward Byron Frohnen is expected to be a key player for the Roadrunners. Credit — Jeff Huehn Photography.

Forward Byron Frohnen has emerged as a key player in the rebuilding effort of Coach Steve Henson at UTSA. The 6-6 sophomore from Las Vegas averaged 8.5 points and 6.5 rebounds last year. He was one of only two freshmen in Conference USA to start every game. As UTSA prepares to open a new season this afternoon against East Central, Oklahoma, theJBreplay.com shines a spotlight on Frohnen with an interview conducted two months ago at the start of fall training:

What’s it been like to play for coach Henson?

He’s been amazing from the start. Details are huge with him. It’s really fun to play the style of play he likes. I’m excited.

Just like today, some things broke down at the end of practice and he let you know about it. He’s got his game face on already.

He does. He’s always serious. No matter what time of year it is. We need that. Season starts right now for us. We got to start getting ready and being better.

Let me ask, what are your goals this year … your team goals?

Team goals? Definitely, we’re trying to win the conference tournament. That’s the goal every year. We’re trying to get to the Big Dance, and I definitely think this group’s going to be able to accomplish that. If we can come together as one and get that team chemistry together, I think we’re going to be really good.

You won a game at the tournament last spring and then played Middle Tennessee tough. What will it take to win it?

At the tournament, it’s a whole another level. Everyone steps up their game to another level. I think toughness is going to be the biggest thing. We hung with Middle Tennessee for a while, but at the end of the day, they were just tougher than us. So, I think conditioning is going to be a major part of that and getting in the weight room is too.

What about the transition from high school? How did you feel this time last year, compared to right now?

This time last year, it was crazy. Like, the level of competition went up immensely. The physicality is at another level, too. This time we know what to expect. We’re ready for a big year.

What about winning 14 games last year … the fans seemed to be OK with it, given how down the team was the year before. Were you OK with it?

No, not at all. The fans might have been happy compared to the years before. But we let a lot of close games go last year. On the road. At home against Charlotte. Those are games we could have won. I think we could have easily reached 20 wins last year. So, looking to improve this year.

What do you think you’ve done to improve your game?

My game? For one, I’m trying to lose a little weight. Trying to get quicker, more athletic. Coach wants me to play more (power forward) this year so I can get some mismatches at the top of the key. To blow by people or knock it down in their face.

What about your range on the jump shot?