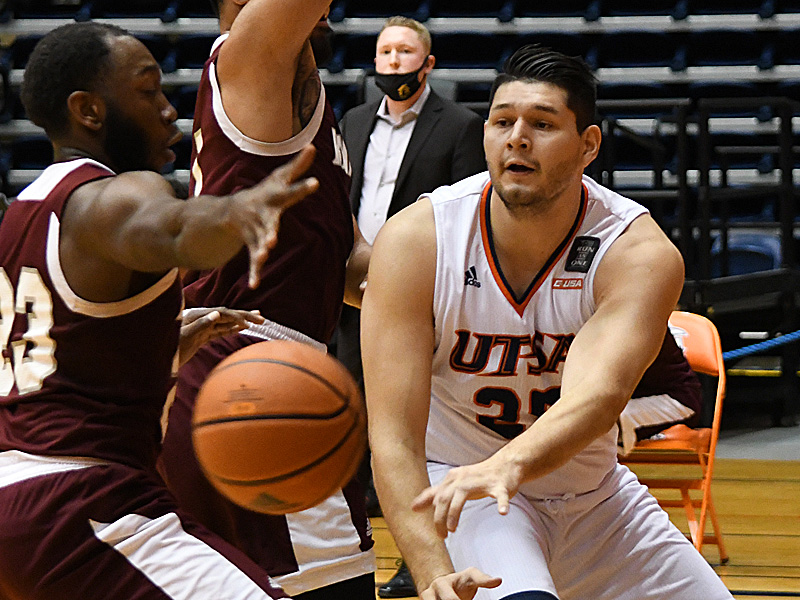 Adrian Rodriguez on Wednesday was lauded by his coach for bringing a positive energy to the program. – Photo by Joe Alexander

Described by his coach as an “inspirational” player who always led by example, UTSA forward Adrian Rodriguez on Wednesday announced he has elected to retire from basketball for medical reasons.

“Today is a hard day as I’m announcing that I am completing my career as a Roadrunner due to medical reasons,” said Rodriguez, a fifth-year senior, in a statement released through the athletic department.

Rodriguez, from Tulsa, Okla., came to UTSA and played in 71 games with seven starts, scoring 157 points, grabbing 184 rebounds and blocking 17 shots. He also had 10 steals.

The 6-foot-7, 245-pound Rodriguez has battled injuries throughout his college career.

He suffered a season-ending knee injury in the season opener of his true freshman season on Nov. 12, 2017, a game in which he produced 10 points and eight rebounds in 14 minutes.

Coach Steve Henson lauded Rodriguez for bringing a positive spirit to the Roadrunners.

“His work ethic, positive attitude and passion for his school and teammates has been inspirational,” Henson said in a statement.

“After suffering an injury in his first collegiate game, Adrian worked daily at rehab in an effort to be the best teammate he can be,” the coach said, “and only through his hard work, he was able to come back and become a key part of our roster for the last three years.”