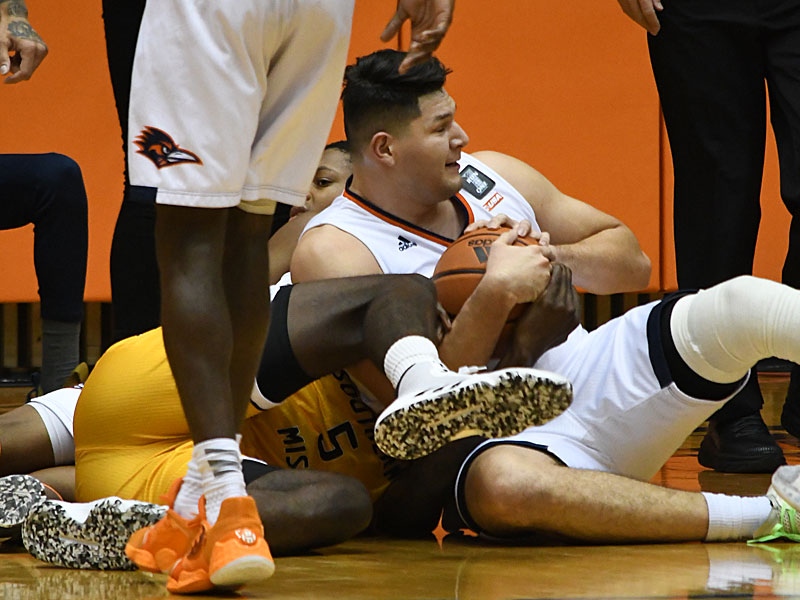 UTSA forward Adrian Rodriguez started for the first time this season last Friday night against Southern Miss. The Roadrunners enjoyed a productive opening 20 minutes and forged a five-point lead at intermission. They ended up winning the game by six.

Same thing happened on Saturday afternoon, basically. Rodriguez started. UTSA moved out to a six-point edge at the half, and the Roadrunners beat the Golden Eagles, once again, by six.

As a result, UTSA is riding a two-game winning streak while preparing for a couple of Conference USA games later this week against the UTEP Miners.

Even though Rodriguez went scoreless with three rebounds in 36 minutes combined in the two recent victories, it doesn’t bother him at all, and that may explain why he has been so effective. The 6-foot-7, 245-pound junior from Tulsa takes his role as a defender and screen-setter and, at times, as a communicator, very seriously.

“I put myself in a mental state that whatever my position (on the team) is, I’m going to come out and give it my all — give my all to my teammates, especially, and do whatever I can to help my team win,” he said. “I’ve been pretty pleased. Whenever I’m out there, I do my job. I get people open, which is my biggest strength, you know, setting great screens, and just getting everybody to talk, getting the energy up, whether that’s in the game or on the bench.”

Rodriguez missed time earlier in the season, sitting out five games, with a back injury.

“It still gives (me) a little bit of problems, but nothing I can’t handle,” he said. “Just got to keep moving forward. Get a little treatment and just push through. You know, this time is limited. You got to make the most of it.”

“He’s a great player,” Rodriguez said. “You know, amazing touch around the rim. Great athleticism. One of the things we’ve talked about is to be physical with him. You know, try to get him to catch it outside of the spots he’s comfortable in.

“Maybe make him take one more crab dribble, to give the defense a little more time to react. Just switching guys on him. Different coverages. You know, I’m not going to guard him the same way Phoenix (Ford), Ced (Cedrick Alley, Jr.) will. Just give him different looks.”