Senior forward Luka Barisic has taken the Covid-19 opt out and will not be with the UTSA Roadrunners for the remainder of the season as he attempts to complete requirements for his academic degree, Coach Steve Henson announced Tuesday afternoon. 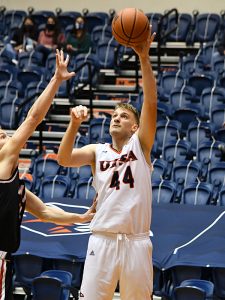 Luka Barisic had his best game of the season on Dec. 22 when he produced 18 points and 10 rebounds against Lamar. – Photo by Joe Alexander

“We certainly wish him well. He was a big part of what we were doing. But we certainly understand where he was coming from and wish him nothing but the best,” Henson said.

Barisic, a 6-foot-10 post from Osijek, in Croatia, joined the team before the 2019-20 season as a transfer from Highland (Ill.) Community College. He played in 32 games with 21 starts for the Roadrunners last year and averaged 6.6 points and 3 rebounds. This year, he played in 14 of the team’s 15 games, all off the bench. He averaged 5.3 points and 3.3 rebounds.

Asked how difficult a decision it was for Barisic, Henson said he thinks “a lot of things” went into it.

“So much has been going on. He’s two classes away from graduating, and to be able to do that from wherever he is…He said he was going to look for a flight to get home. He hasn’t been home in a long time. So I got to think that had something to do with it, as well.”

With the onset of the Covid-19 pandemic last spring, all NCAA Division I basketball players have been granted an additional year of eligibility, but Henson said he doesn’t expect Barisic to return.

“We didn’t discuss that,” the coach said. “My guess is that he’s ready to get that degree and explore things back home. He might still have the opportunity to play back home in one of the leagues there. So that would be my guess. Coming out of here … with a good degree in hand … I wouldn’t anticipate him coming back here or playing anywhere else in college. I think if he continues to play it would be at the professional level.”