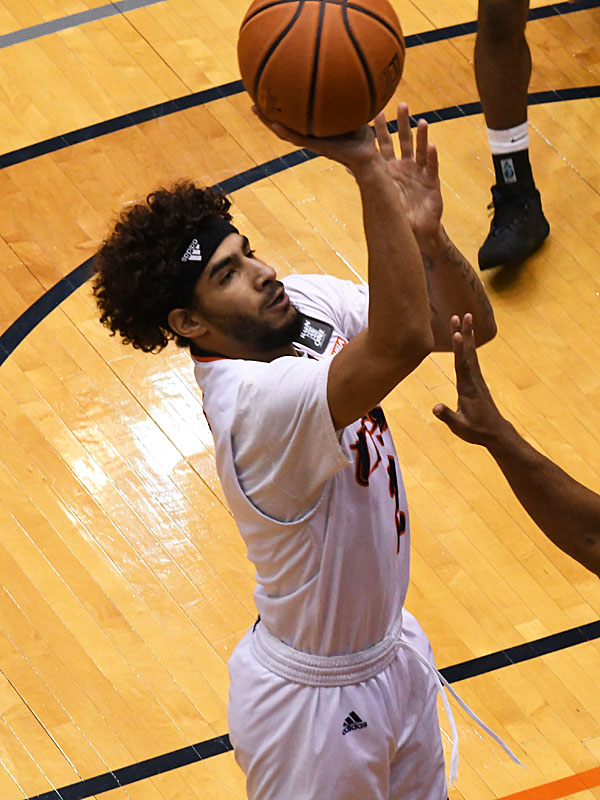 Jhivvan Jackson, seen here in a game from last December, increased his career field goal total to a C-USA record 813 when hit seven on Saturday in a 90-47 victory at Florida International. – photo by Joe Alexander

Senior guard Jhivvan Jackson broke the Conference USA record for field goals in a career, and the UTSA Roadrunners earned their first C-USA road sweep of the season Saturday as they blew out the slumping Florida International Panthers 90-47 in Miami.

A native of Bayamon, Puerto Rico, Jackson also hit another career milestone by scoring 22 points to move him past 2,400 since he joined Roadrunners in 2017-18 out of Euless Trinity High School.

Humbled by a slow start to the season, UTSA has won two straight on the road, has forged a 5-1 record in its last six in C-USA and has rekindled passions about competing in March.

“We talked about the opportunity that’s ahead of us,” UTSA coach Steve Henson told the team’s radio broadcast. “We started out 1-5 (in conference). Now we’ve won four out of five or five out of six or whatever it is.

“Trending in the right direction. Now we’re going to play four of our next six at home. We’re very healthy. Our spirits are good. I think we’re in a position to make a run here.”

Jackson finished with 22 points on 7 of 11 shooting, including four 3-pointers. He knocked down three 3-pointers and scored 16 of UTSA’s 18 points in a run at the end of the first half. With the performance, he pushed his career total in field goals to 813, breaking the previous record of 810 held by UTEP’s Stefon Jackson from 2006-09. Jhivvan Jackson also increased his career scoring total to 2,411, which boosts him to 101st on the all-time Division I scoring list, according to sports-reference.com.

It is possible, pending a further review of records, that Jackson ranks first in Division I career scoring among players who were born in Latin America. Former Dallas Mavericks great J.J. Barea, who, like Jackson, was born in Puerto Rico, finished his four-year career at Northeastern in 2006 with 2,290 points.

Playing as a team

Coming into Miami, the Roadrunners were 0-11 on the road since February of last season. They were 0-8 this season. Now they’ve broken through with two of their best road showings. They beat FIU 87-80 on Friday night and followed with the 90-47 rout. The 43-point margin of victory against the bedraggled Panthers was their widest of the year.

Eleven players scored, and seven produced more than one field goal. For the second straight game, they shot better than 50 percent from the field (51.6). Defensively, they held FIU to 34.7 percent and gave up their fewest points in any game. Both Keaton Wallace and Eric Parrish scored 16 points. Parrish, a transfer from Nevada in his first year at UTSA, hit six of six shots from the field. He had nine points and eight rebounds off the bench Friday.