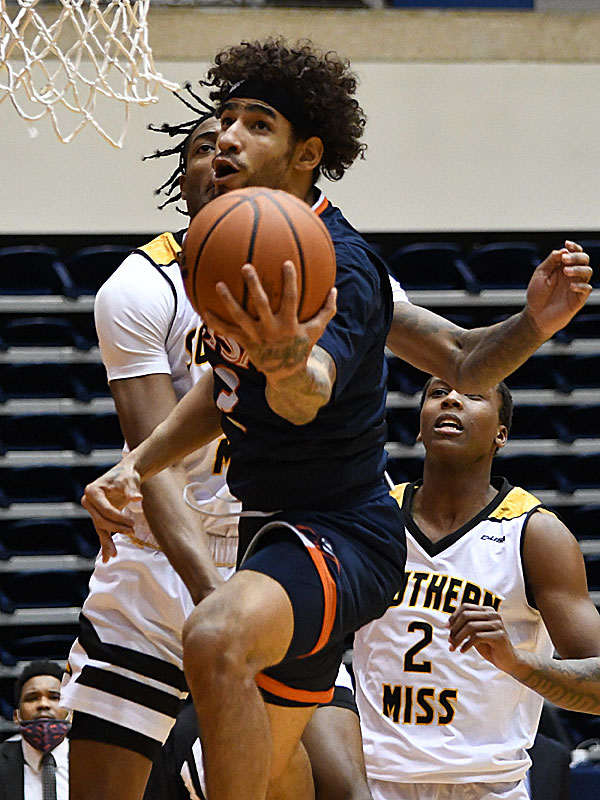 Is UTSA senior Jhivvan Jackson the No. 1 Latin American-born scorer in NCAA Division I history? Apparently so, based on a review of online records by The JB Replay. — Photo by Joe Alexander.

Jhivvan Jackson has supplied so many thrills for fans of the UTSA Roadrunners in the past four seasons, it’s hard to quantify his impact on the program.

Paired with Keaton Wallace, the duo always gives UTSA a chance to win. It’s always worth it to come out and watch the two of them, because there’s always a chance for something special to happen.

He’s got the ability to shoot the long ball or the pull-up floater. Jackson on a mad-dash to the hoop is something to see. Now, if he can team with Wallace and friends to reach the NCAA tournament in a few weeks, then that certainly would boost his stature as one of the program’s most important players.

If he reaches the NBA some day, that, too, would solidify his standing — along with Derrick Gervin and Devin Brown — as an athlete that fans will talk about for the next 40 years.

Clearly, Jackson already has left an indelible mark on Roadrunners basketball, and part of it has to do with bringing in new followers.

For fans of the game south of the United States, UTSA’s profile is pretty high right now. People are watching. Why? Because, from what I can tell, the 6-foot native of Puerto Rico has scored more points in his college career than any other Latin American-born NCAA Division I player in history.

Based upon online research at websites such as sports-reference.com and basketball.realgm.com, along with assistance from NCAA statisticians and member schools, Jackson ranks No. 1 on this unofficial list compiled recently by The JB Replay. 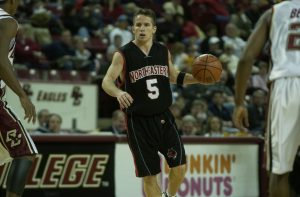 Puerto Rico native J.J. Barea scored 2,290 points in college for the Northeastern Huskies in Boston. He later went on to enjoy a 14-year career in the NBA, 11 of them with the Dallas Mavericks. — Photo, courtesy of Northeastern University athletics

Once again, this is by no means an official list on file at the NCAA. Neither is it found on any website that I have seen. It’s just something I’ve researched for the past few weeks based on my coverage of the game since the late 1970s.

Taking one last step in my little project, I messaged the NCAA office that handles basketball statistics. 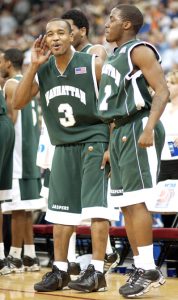 Dominican Republic native Luis Flores (No. 3) started his career at Rutgers, transferred to Manhattan and finished his career with 2,160 points. — Photo, courtesy of Manhattan athletics

Recently, the NCAA responded by sending out my query into a forum that is seen by information directors around the country. In my query, I asked if anyone could supplement my research with knowledge of a player (or players) from Latin America who had scored at least 1,800 points in NCAA Division I.

My query turned up two names — Vasquez and Carrington — that I did not have on the preliminary list. If I get more names and information, I’ll update accordingly.

So, today, I wanted to push out the story, because this coming week may be the last time we will ever see Jackson and Wallace (1,964 points) play at the Convocation Center. The Roadrunners host the UAB Blazers on Friday night and Saturday afternoon in what likely are the last two regular-season games of the season. 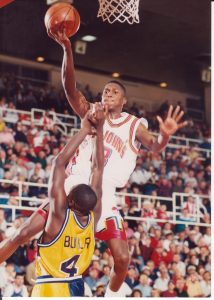 Felipe Lopez scored 1,927 points for St. John’s University and was a first-round pick in the 1998 NBA draft by the Spurs, who traded him — along with veteran Carl Herrera — to the Vancouver Grizzles for Antonio Daniels. — Photo, courtesy of St. John’s athletics

A few weeks ago, I asked Jackson’s father, Leroy Jackson, about his son’s emergence as one of the top scorers in Division I history. Jhivvan is 86th on the all-time list and is second in Conference USA.

“I can’t even put it into words,” said Leroy Jackson, a former professional player who works now for American Airlines in Dallas.

Leroy transferred in his job from Puerto Rico to the Metro-Plex in 2008. An older son followed in 2009, setting the stage for Jhivvan to make the move in 2010 for his seventh-grade year. Already advanced as a player at a young age, Jhivvan went on to star at Euless Trinity High School.

At UTSA, Jhivvan has continued to progress. He’s made first-team, All-Conference USA the past two years. Last year, he led the C-USA in scoring and ranked second in the nation at 26.8 points per game.

His father, a native of Panama who played collegiately at Oregon State and professionally for 15 years, mostly in Latin America, said he is not surprised at the trend. “No, I’m not,” he said. “And I know he can do more.” 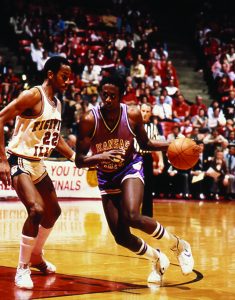 Rolando Blackman, from Panama City, Panama, scored 1,844 points at Kansas State through 1981. He did it without the 3-point shot, which didn’t come into play in the NCAA until the late 1980s. Blackman played 13 seasons in the NBA — 11 with the Dallas Mavericks — and made four all-star teams. — Photo, courtesy of Kansas State athletics

Leroy said the basketball communities in both Puerto Rico and Panama have taken notice of his son’s achievements. After all, the family is prominent in Latin American basketball circles. Jhivvan’s maternal grandfather, Flor Melendez, is a prominent coach in Puerto Rico. Leroy himself played professionally in Puerto Rico for years.

But even with the hype, Leroy said Jhivvan isn’t thinking now about the headlines he makes or the impact he is having back home.

More than any scoring list, Jackson said his son is more consumed with a team goal at the moment.