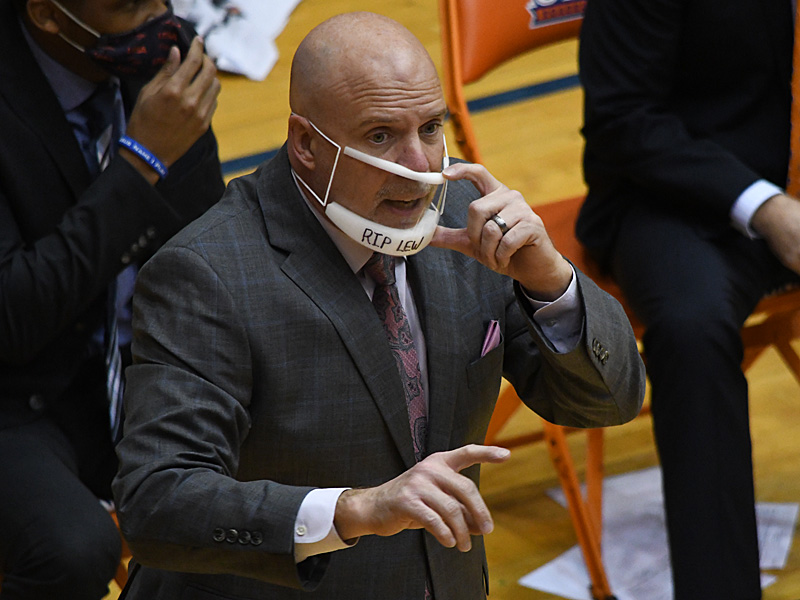 Steve Henson’s UTSA Roadrunners have won four straight and seven of their last eight going into a weekend home series against the UAB Blazers. — Photo by Joe Alexander

Coach Steve Henson said Wednesday afternoon in a zoom call with reporters that the UTSA Roadrunners’ two Conference USA home games against the UAB Blazers this weekend likely would be the team’s last games in the regular season.

They’re set for Friday night and Saturday afternoon at the Convocation Center.

In addition, Henson said he expects the games also will be the last two at home in the remarkable careers of Roadrunners seniors Jhivvan Jackson and Keaton Wallace, the leading scorers in the program’s 40-year history.

Both Jackson and Wallace told reporters they have not made a decision on whether they might take advantage of an extra year of eligibility. Before the season, all Division I basketball players were given an extra year because of the coronavirus pandemic.

Even so, Henson said he plans on having “Senior Day” festivities on Saturday for Jackson, Wallace and also for forward Phoenix Ford. The coach was asked how “Senior Day” might be different with the lingering possibility that one or both of his high-scoring guards could return.

“I think we’ll go through it as if it’s their last game and worry about it after that,” Henson said. “The guys, right now, they’re focused on continuing to play (into the tournament). We started talking about this weeks ago — the opportunity to start winning games, to play better basketball.

“At one point, we knew four of our final six were going to be at home. That we could go into the conference tournament with some momentum. So, they liked that.

“What we did yesterday in practice was really, really encouraging. Just from different guys making plays. The ball moving. I think our guys are pretty locked in right now. There’s always that emotional piece on Senior Night, right before the game starts. (But) our guys are still planning on playing basketball for awhile.”

UTSA hasn’t played since Feb. 13. On that day, the Roadrunners completed a two-game, home sweep of the Florida Atlantic Owls, pushing their winning streak to four. A day later, a few players came in to shoot at the Convocation Center, but with cold and inclement weather on the way, the campus was scheduled to close at 5 p.m.

As it turned out, a week of the worst winter weather in South Texas in years descended from cold, gray skies, leading to power outages all over the city.
The UTSA basketball team was not spared.

Some players — notably, roommates Wallace and Jackson — had power go out in their apartments. From a basketball standpoint, the inclement weather kept the Roadrunners off the practice floor through Thursday. Ultimately, the team’s two road games, set for Friday and Saturday at Charlotte, N.C., were scrapped.

It was a blow to the fast-improving Roadrunners, who have won seven of their last eight conference games.

“We wanted to go down there and play,” Henson said. “We just couldn’t make it happen.”

Before the season, C-USA officials left open the first week of March — next week — for any make-up games. Even so, the two games between UTSA and Charlotte likely will not be played, Henson said, because Charlotte’s end-of-week schedule is full. The 49ers are scheduled to play Covid-related makeups on the road at Marshall on March 5 and 6.

“The chances of us playing Charlotte are slim and none,” said Henson, who added that the likely cancellations have created a “pretty weird situation for us” leading into the C-USA tournament.

“We’ll go 24 days with only two games — these UAB games — in that window there, which is less than ideal,” Henson said. “So we’re still trying to find something for next week. (We’ll) see if we can schedule a game or two. I’d really not prefer to go such a long span with only two games in there. But at this point, as of right now, the UAB games will be our last regular-season games.”

Jackson has scored 2,461 points and Wallace 1,964. Jackson has twice been first-team all-C-USA. Wallace, in turn, has been second-team all-C-USA twice. The Roadrunners have built their program around them, which means that Saturday likely will be an emotional day.

“I’ll probably be as emotional as anybody, with the exception of some of the family members,” Henson said. “Keaton’ll probably be pretty stone-faced. That’s kind of his M.O., anyway. Jhivvan will be emotional, I think.

“Once the ball gets tipped, I think they’ll play great. It’s unfortunate that we can’t have an arena full of fans come and honor them in that regard. We’re going to honor Phoenix, as well. Those guys have done a great job. Great ambassadors for our program.”

With Covid restrictions, attendance will be limited.

“Keaton and Jhivvan helped us turn this thing around,” the coach said. “Got the attention of everyone around the country, everyone around the league. Really proud of them. It’s amazing the accomplishments they’ve had. Wish we could celebrate it in more grand style. But we’ll do the best we can with Covid.”

“My anticipation is that they have accomplished so much, I anticipate they’re ready to move on,” the coach said. “They love it here, and we’re glad they do, and we love having them here, but they both have sights set on winning a bunch more games here and then going and playing professionally. We haven’t spent a lot of time on the details with the scholarship numbers, or anything like that.”