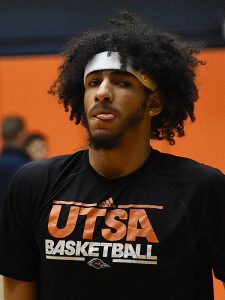 UTSA’s Jhivvan Jackson shoots around before the Roadrunners’ game against Oklahoma on Nov. 12. – photo by Joe Alexander

In a game for seventh place at the Gulf Coast Showcase in Estero, Florida, Keaton Wallace produced 19 points for the Roadrunners, who improved to 1-5.

Christian Carlyle led the Eagles with 16 points as Florida Gulf Coast dropped to 2-5.

UTSA entered the tournament in Florida coming off losses to Division II St. Edward’s and to Division I powers Oklahoma and Oklahoma State.

Jackson, coming off knee surgery, did not play in any of the games as he completed his rehabilitation from ACL knee surgery.

Cleared to play before the road trip to Florida, he competed in all three games, with his playing time restricted to 15 minutes.

Against Florida Gulf Coast, Jackson scored his season high on 7 of 15 shooting from the field and 5 of 10 from three-point range.

Last year, Jackson and Wallace emerged as two of the keys in UTSA’s resurgence as a basketball program.

The Roadrunners produced a 20-15 record for their first 20-win season in seven years.

Florida Gulf Coast center Ricky Doyle played against his father’s alma mater. Doyle had 2 points, a rebound and an assist for the Eagles. His father is Rick Doyle, who was UTSA’s first great center. Doyle played for the Roadrunners from 1982-84. He teamed with Derrick Gervin to lead UTSA to its first 20-win season in 1983-84. Doyle was a fifth-round draft pick by the Detroit Pistons and went on to play professionally in France for 11 years. Ricky Doyle was born in Pau, France, in 1996. Rick was in the stands to watch the game, an FGCU spokesman said.

“It was a good trip for us in terms of learning. (We played) three really good teams. Those three teams we played will all be the favorites in their conference. I told our guys just now I’m happy for them. We got the win. We’re making progress. I really liked the way they responded yesterday at halftime. You know, down, and came out and fought. Some good signs there.” — UTSA coach Steve Henson, on the team’s trip to Florida. (Interview on KTKR radio).