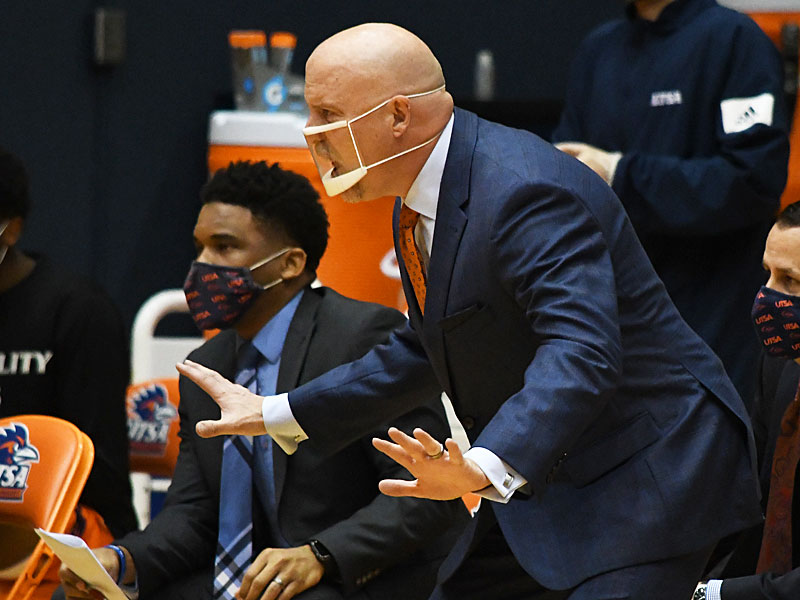 UTSA coach Steve Henson (right) hopes to get his team turned around this weekend after losing five of six to open the C-USA schedule. — Photo by Joe Alexander

As the last-place UTSA Roadrunners prepare to host the Southern Miss Golden Eagles this weekend, players and coaches are like sailors at sea, peering out over the bow at rolling waves crashing higher and higher on the side of the ship.

They have felt the winds gust and the rain sting their faces at times over the past few years, but nothing like what they have experienced lately.

The Roadrunners (5-8, 1-5 in Conference USA) are off to their rockiest start to a conference schedule in eight years. Veteran fans of the men’s basketball program need to flip through the pages of history to 2012-13, when their team opened with seven straight losses in the Western Athletic Conference, to find a tougher start.

In addition, UTSA has never been four games under .500 after six games in seven previous seasons in the C-USA. But it is notable that Coach Steve Henson started 2017-18 at 2-4 and finished his second year in the program with an 11-7 ledger in the conference.

Last week, the Roadrunners left town, coming off a home victory over North Texas, and lost twice in two days at Louisiana Tech. With little time to wring hands over seeing themselves in last place in the seven-team, C-USA West Division standings, they did what they always do, win or lose.

They went back to practice.

“I think our mindset is pretty good,” Henson said. “You know, disappointed that we didn’t play a little better. Realistic to know that we got to shore some things up. Got to play harder defensively. Got to execute better offensively. Got to shoot better shots.

“But (players) came in with the right mindset. We’ve had some good stretches of practice the last couple of days.”

A sense of urgency could be detected in a Wednesday afternoon zoom call, with junior forward Phoenix Ford talking about working through “a little” adversity as they fine tune for the Golden Eagles.

“It’s definitely a concern, but not too much of a concern where we’re worried or panicking, but there’s definitely a little adversity,” junior forward Phoenix Ford said. “Definitely didn’t expect to start the conference like this, for sure. Just have to bounce back and win the next ones.”