San Antonio native Steve Lutz is going to the NCAA tournament in his first season as a head coach. 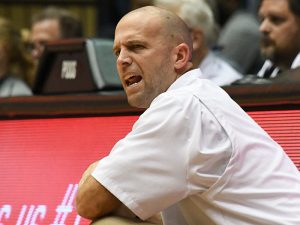 The Lutz-led Texas A&M Corpus Christi Islanders clinched a berth in the Big Dance of college basketball with a 73-65 victory Saturday over the Southeastern Louisiana Lions.

The victory for the fourth-seeded Islanders against the No. 2 Lions came in the finals of the Southland Conference tournament in Katy.

The Lions scored 13 straight points early in the game and led the Islanders 16-6.

In response, the Islanders roared from behind with a 29-12 burst that gave them a 35-28 lead with two minutes left in the half.

The Lions came out energized after intermission, erasing a five-point halftime deficit and taking a one-point lead.

From there, the Islanders retaliated when De’Lazarus Keys hit a layup and San Antonio Brinson added a 3-point jumper on an assist from Jackson.

The tournament served as a new season, in some respects, for the Islanders. At one point, they lost five in a row and six out of seven during the SLC schedule.

When they arrived in Katy, they turned it on, beating Houston Baptist, 75-60 in their opener. In Friday’s semifinals, they stepped it up again and defeated the top-seeded Nicholls State Colonels, 71-64.

After knocking off Southeastern, they had secured victories over the two best teams in the conference in a span of 24 hours.

As a result, the Islanders clinched the Southland’s automatic bid and earned their first trip to the NCAA tournament since 2007 and only their second NCAA trip ever.

The Islanders started basketball in the 2002-03 season.

Lutz is a 1991 graduate of East Central High School who played for the Hornets under Stan Bonewitz, a member of the San Antonio Sports Hall of Fame. In college, he played at Texas Lutheran University.

His coaching career has been marked with assistant coaching jobs at some of the best programs in the nation.

Prior to taking the A&M-Corpus Christi job, he worked under Matt Painter at Purdue in the Big Ten and under Greg McDermott at Creighton in the Big East.

Lutz has toiled in the state of Texas as assistants at both Incarnate Word and at SMU.

Teams from the state of Texas finished 2-1 on Saturday in conference tournament finals, as both Texas A&M-Corpus Christi and Texas Southern won and Abilene Christian lost.

Given those results, Abilene Christian is now out of contention for an NCAA bid. It’s also possible that SMU got knocked out of the NCAA picture, as well, with a Saturday afternoon loss to Memphis in the American Athletic Conference semifinals.

Now, it seems that fans might be able to expect eight bids going to teams in the state — to Baylor, Texas Tech, Texas and TCU in the Big 12; to Texas A&M in the Southeastern Conference; to Houston in the AAC; to Texas Southern in the SWAC and to A&M-Corpus Christi in the Southland.