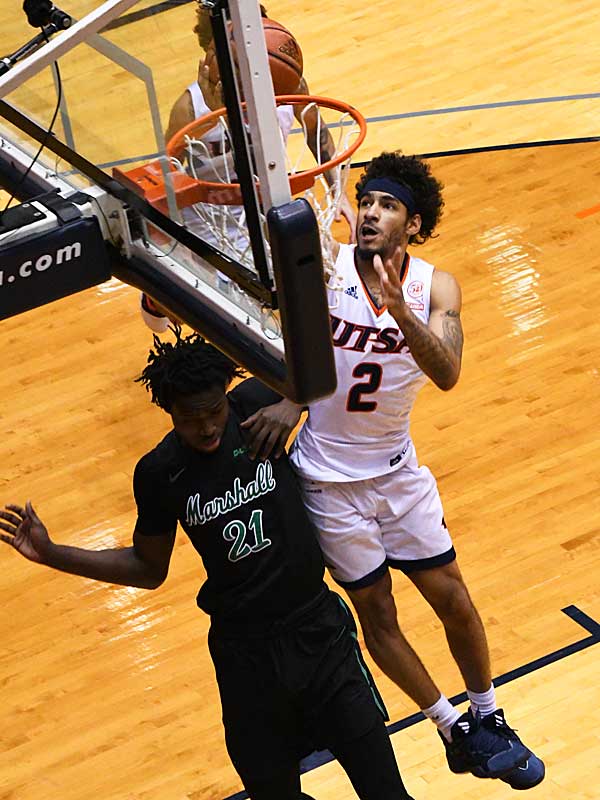 Jhivvan Jackson shot 10-of-28 from the field against the Marshall Thundering Herd. – photo by Joe Alexander

The UTSA Roadrunners strapped a strong defensive and rebounding effort on the Marshall Thundering Herd in forging a 72-63 victory in Conference USA basketball Thursday night at the Convocation Center.

Jhivvan Jackson produced a double-double with 25 points and 10 rebounds for the Roadrunners. 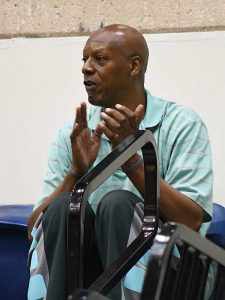 “We were working pretty hard defensively,” UTSA coach Steve Henson said. “Had a few good stretches in the first half defensively. Had an eight or nine-point lead late in the half and then just had a horrible stretch. Second half we came out and I think we had 10 straight stops at one point.

“They had 17 points in a 13-minute stretch. We took away their transition and easy buckets. We were working pretty hard defensively.”

UTSA tied a school record with 67 boards, dominating the visitors 67-44. Atem Bio pulled down 10 rebounds, including six on the offensive end, and Byron Frohnen had nine.

On the defensive end of an ugly game, UTSA held Marshall to 33 percent shooting, including 21.9 percent in the second half.

The Roadrunners struggled shooting the ball, as well. They connected on 30 percent from the floor and 11.5 percent from long distance.

The Roadrunners essentially won the game at the free-throw line, making 21 of 26, including 15 of 18 in the second half.

The Thundering Herd surged late in the half to build a 38-34 lead on the Roadrunners at intermission. Taevion Kinsey scored 17 of his game-high 27 points in the first 20 minutes.

UTSA guard Knox Hellums sat out with a fracture in the tip of his right thumb. Hellums suffered the injury in a road loss at Charlotte last Saturday.

By scoring 25 points, Jackson pulled to within striking distance of two school records.

Jhivvan Jackson sinks a floater for UTSA. On the next possession, he drives for a layup. Roadrunners by five with 4:53 remaining. https://t.co/hyCDEtrt3Q pic.twitter.com/bAR1du7vGh