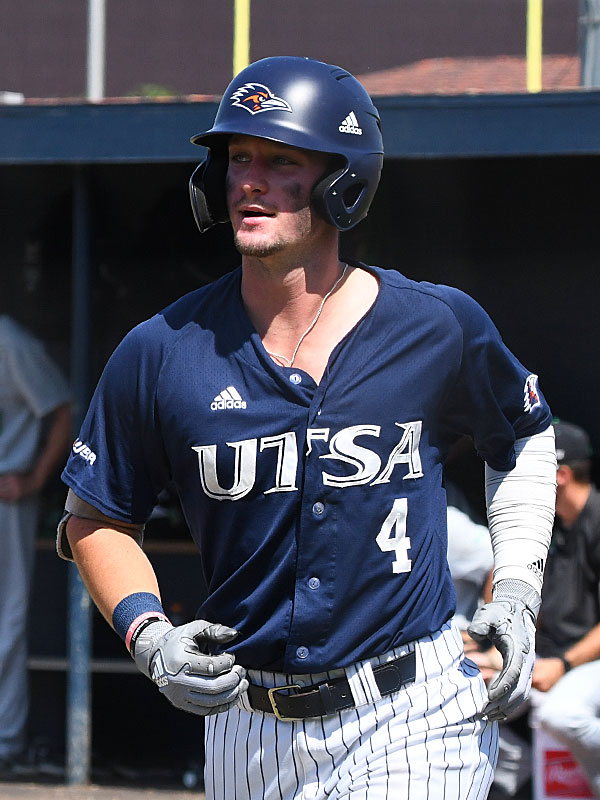 UTSA’s Chase Keng belted a three-run homer in the sixth inning, boosting his team-leading RBI total to 50 on the season. – Photo by Joe Alexander

The Marshall Thundering Herd built an eight-run lead in the early going Saturday and then held off UTSA, 9-6, in Conference USA baseball at Roadrunner Field.

In winning, the Herd evened a three-game series at one win apiece, kept alive their hopes for a C-USA tournament bid and stalled the Roadrunners’ charge toward the top of the standings.

Southern Miss leads the conference by two games over both UTSA and Louisiana Tech and by three over fourth-place Florida Atlantic. The UAB Blazers hold eighth place and the last playoff spot, two games ahead of Marshall.

Everyone has seven games to play in the regular season, with UTSA set to play Marshall at home on Sunday, followed by three at seventh-ranked Southern Miss next weekend and then three more at home against UAB from May 19-21.

On a hot Saturday in San Antonio, with temperatures in the 90s, UTSA arrived at Roadrunner Field 18-5 in its last 23 games and 13-3 in its last 16 in the conference. Marshall had struggled with an under .500 record for most of the season.

But the Herd, undeterred, broke loose with a big game on offense, collecting 13 hits, including six for extra bases. Leadoff man Travis Sankovich was a pain all day, stroking four hits.

In addition, both Kyle Schaefer and Geordon Blandon hit home runs off UTSA ace Luke Malone, who lasted only 3 and 1/3 innings and took the loss. Malone (7-2) gave up five runs on seven hits. Patrick Copen (3-3) pitched six innings and emerged as the winner.

He left the game with the Herd leading 9-4 and likely felt some anxiety down the stretch as the Roadrunners chipped away at the lead.

UTSA scored three runs in the sixth, one in the seventh and one in the eighth. In the ninth, Marshall’s Ryan Capuano retired three straight to complete a two-inning save.

Chase Keng and Sammy Diaz homered for the Roadrunners.

In other games involving C-USA leaders Saturday, the first-place Southern Miss Golden Eagles stumbled at home for the second day in a row. The Old Dominion Monarchs claimed a 4-3 victory over the Eagles in Hattiesburg. The Louisiana Tech Bulldogs made up some ground with an 11-6 victory at home over the FAU Owls.