UTSA wins. Shane Sirdashney delivers an RBI single up the middle in the B9 as the Roadrunners rally to beat the Marshall Thundering Herd, 5-4. https://t.co/hyCDEtrt3Q pic.twitter.com/FmAYAg0TG7

Two weeks ago, a high and inside heater from a Florida International pitcher caught UTSA’s Shane Sirdashney squarely in the ribs.

It was a brutal sequence of events in the April 24 game in San Antonio, with Sirdashney coughing up blood and then going to the hospital to see if he had suffered a fracture. 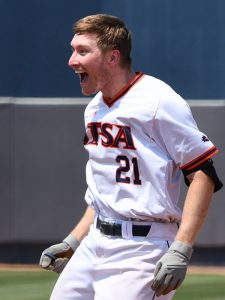 Shane Sirdashney went 2 for 4, scored a run and drove in the game winner with a one-out, RBI single in the ninth inning. – Photo by Joe Alexander

Luckily for Sirdashney, the X-rays were negative.

“There were no fractures,” he said. “I was just kind of doing breathing exercises for a week, just doing nothing, just trying to get my lungs back. I felt like I was ready to go this weekend, and I played.”

Sirdashney’s comeback was well timed. It was just about as well timed as his walk-off RBI single on Sunday, which completed a two-run, ninth-inning rally and lifted the Roadrunners to a 5-4 victory over the Marshall Thundering Herd.

Asked if he thought the baseball gods owed him the good fortune given his recent misfortune, which knocked him out of the lineup for five games, Sirdashney smiled.

“I think so,” he said. “I was just glad that we got the W. We needed this win bad. Just the way it came out at the end there was awesome.”

The implications of the two games to one series victory were equally compelling for the Roadrunners, who will move into the final two weeks of the season with a chance to claim their first Conference USA regular-season title. 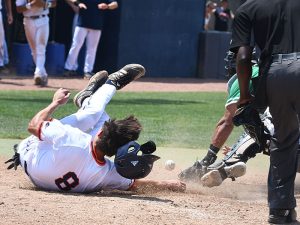 Leyton Barry takes a tumble after he scores the game-tying run in the ninth inning. In a head-first slide, he collided with Marshall catcher Ryan Leitch, who was shaken up on the play. – Photo by Joe Alexander

It will be an uphill battle, for sure.

The Southern Miss Golden Eagles lead the conference, with the Roadrunners alone in second place, two games behind. Both teams have six to play, including three straight, head-to-head, at the Golden Eagles’ home park next weekend.

“I’m glad we’re in the picture,” UTSA coach Pat Hallmark said. “That’s all you want … as a coach. Obviously, in two more weeks, I want to be on top. I really don’t mind being in second place right now, because, we’re the hunter. But, we got to play good ball.

“This weekend (against Marshall), I don’t think we played bad. But we’re not hitting as sharp as we could. I think we’ve set a real high expectation, because we have hit all year. So, it seems easy … But, it ain’t that easy to hit. The pitches are not that easy. They’re not laying ’em in there.

“So, we got to stay positive with the guys. We didn’t hit as well as we could (this weekend). Clearly, I think we only had seven hits (today). But we’ll keep working at it. The guys have hit well all year. It’s not uncommon to go through slumps. So, we’re going to keep working at it.” 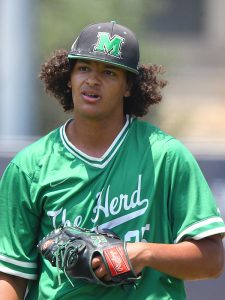 Zac Addkison, a Marshall sophomore from San Antonio and TMI Episcopal, struck out five in six innings Sunday. He left with a 4-3 lead, and observers said later his fastball hit 94 mph on the radar gun. — Photo by Joe Alexander

Both Marshall and UTSA had a lot of motivation to win this week. The Thundering Herd were trying to set themselves up to get into the eight-team, C-USA tournament field. The Roadrunners wanted to keep winning to put pressure on the Golden Eagles.

“It was huge,” Sirdashney said, “for them and us. This puts us in good position going into Southern Miss next week. It’s going to be a huge series. We get a series win there and it’s going to be huge for our RPI and also maybe winning the conference.”

Sirdashney said he likes the Roadrunners’ chances to overtake Golden Eagles, who have been in the top 10 nationally for the last few weeks.

“I hope we take this momentum (all the way),” he said. “I know everyone’s finishing finals this week. We’re going to be all focused on baseball after finals, and then when we go to Southern Miss, we’re going to be ready to play.” 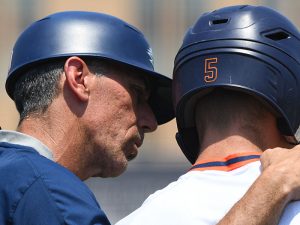 UTSA coach Pat Hallmark said it’s fun to participate in the C-USA title race, but in order to win it, he said the team will need to swing the bats better in the last six games of the season. UTSA will play three at Southern Miss next weekend and then three at home against UAB from May 19-21.- Photo by Joe Alexander

Elsewhere in the conference on Sunday, Southern Miss downed the Old Dominion Monarchs 5-4 in 10 innings to avoid getting swept at home this weekend. The seventh-ranked Golden Eagles (36-12) won on a bloop single by Danny Lynch that scored Christopher Sargent. Also, the FAU Owls beat the Louisiana Tech Bulldogs 5-2, to win two of three in Ruston.

Ryan Capuano opened the ninth inning on the mound for the Thundering Herd Sunday, hoping to protect a 4-3 lead. Capuano struck out Sammy Diaz looking. Next batter up, Leyton Barry, drew a walk. Austin Ochoa, a pinch hitter, followed with a single up the middle, moving Barry to second. From there, with Jonathan Tapia at the plate, Capuano threw a wild pitch. As a result, Ochoa took second and Barry scampered to third. 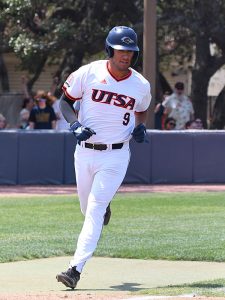 Not wanting to deal with Tapia in that situation, Capuano intentionally walked him to load the bases. Josh Killeen stepped in. Killeen lifted a pop fly into shallow right field. Barry beat the throw to the plate with a head-first slide to tie the game, 4-4. The collision shook up Marshall catcher Ryan Leitch, but after conferring with the Marshall staff, he stayed in the game. After the delay, Sirdashney stroked an 0-1 offering into center field, bringing in Ochoa for the game winner.

And, what did he see on the play when the tying run scored? “I thought the slide was awesome,” Hallmark said. “I thought he slid straight in and hard. Really, really hard. He slid so hard, head-first hard, it was a little dangerous. But he went for it. I don’t know if he knocked the ball out or not, but the ball came (out of the catcher’s glove).

“It was a great slide. You got to go in low and hard. That’s what you’ve got to do. It’s not dirty. It’s just hard. I’d actually rather him go feet first. But, he’s doing everything he can to get there.”

UTSA ties the game in the B9 as Leyton Barry slides in at home on a sacrifice fly by Josh Killeen. https://t.co/hyCDEtJChY pic.twitter.com/5XJh7LzDN3

UTSA right fielder Chase Keng has been one of the team’s hottest hitters during the team’s 25-game ride of 19 victories against only six losses. During the streak, he has hit for both average and for power. On Saturday, he blasted a three-run homer to boost his team-leading RBI total to 50. On Sunday, Keng made one of the best defensive plays of the season, captured deftly by photographer Joe Alexander. 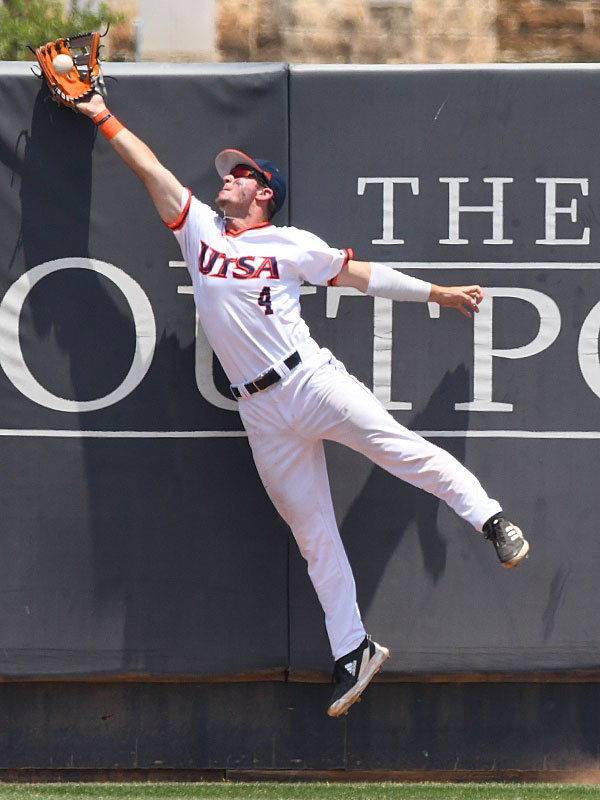 UTSA right fielder Chase Keng makes a sensational catch against the wall in the sixth inning. After the catch, Keng fired to second to double off Daniel Carinci to end the inning. The play likely prevented one run, and possibly two, from scoring. – Photo by Joe Alexander