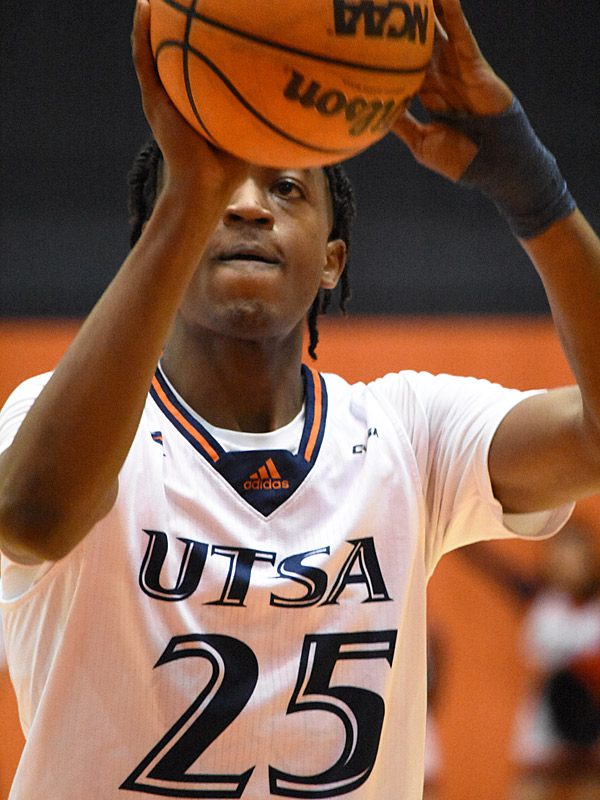 UTSA’s Isaiah Addo-Ankrah returned to game action for the first time in more than a month and scored 12 points off the bench. The FIU Panthers held on at the end to win 77-72, handing the Roadrunners their sixth straight loss. – Photo by Joe Alexander

With the UTSA Roadrunners riding a discouraging six-game losing streak, Coach Steve Henson declined to blame injury misfortune for his troubles. He easily could have, but he didn’t.

For the first nine Conference USA games on the schedule, Henson was without one of his best outside shooters, and over the past four, he was also missing his best inside scoring threat for two and his starting point guard for the next two.

In fact, it could be argued that with an athletic 7-footer playing exactly zero games all season because of academic and injury issues, UTSA hasn’t been whole at any point since the first ball was tossed up back in November. 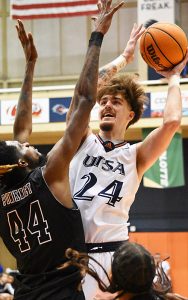 Jacob Germany produced 19 points and 13 rebouinds against Florida International. He hit eight of 14 shots from the field, and six of his rebounds were on the offensive end. – Photo by Joe Alexander

All of it is true, but if you listen to Henson, the halfway point in the C-USA regular season is no time to start lamenting the injuries or dwelling on what might have been.

The coach insisted after a 77-72 loss to the FIU Panthers on Saturday afternoon that the Roadrunners simply need to keep their heads up and get back to work.

“There’s enough areas to be frustrated with,” Henson said. “That’s not one that I’m focused on. You start doing that, and it sounds like you’re looking for excuses. We’re not going to do that.”

Nevertheless, the loss to FIU dropped UTSA to 7-14 on the season and to 1-9 in conference play. UTSA is in last place in the C-USA with 10 games remaining, and Henson plans on coaching the players who are available, starting with a practice on Monday afternoon and then a game on Thursday night at North Texas.

“The other guys (that we have playing) are good players,” the coach said. “They’ve got the opportunity, so we’ve just got to do things better. We need to flow better offensively. We need to fight harder defensively, take better care of the basketball.

“Those are the things that I’m focused on.”

In an afternoon matinee at the UTSA Convocation Center, FIU sophomore Denver Jones scored eight of his team-high 27 points in the final 2:02 as the Panthers held on to snap their own four-game losing streak.

With the victory, FIU improved to 9-11 and to 3-6 in the C-USA. Trailing by 18 early in the second half, the Roadrunners charged to within five with 1:40 remaining. UTSA freshman guard DJ Richards hit a triple from the wing that trimmed the lead to 71-66. 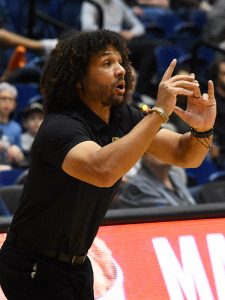 From there, UTSA forced a missed shot and had a chance — if it could pull down a defensive rebound — to set up for an opportunity that might cut the lead to three or even two points. FIU reserve center Seth Pinkney, however, had other ideas. He snared a key offensive rebound to stop the momentum.

With new life, FIU got the ball to Jones, who subsequently went to the free-throw line with 50.5 seconds left and hit both ends of a one-and-one. His two clutch makes lifted the Panthers into a seven-point advantage. UTSA couldn’t get closer than five the rest of the way.

“It felt better than relief, because our guys put a lot of emotional preparation into this game, and we knew we didn’t play anywhere near the best version of ourself on Thursday (in an 81-61 loss at UTEP),” he said. “We really felt like that was in the posture that showed up in El Paso.

“So, it’s tough to win on Saturday on these (C-USA road) trips. In fact, this is the first one we’ve won since I’ve been here. We’re very excited. I was just proud of our spirit, how connected we were out there, and it showed with our play.”

In the big picture, the Panthers won the game with defense, limiting UTSA to 37.3 percent shooting. Specifically, they did a good job in holding Roadrunners shooting guard John Buggs III to 0 for 10 from the field.

Center Jacob Germany, in his second game back after sitting out two with a concussion, led the Roadrunners with 19 points and 13 rebounds off the bench.

Richards, from the Houston area, finished with 18 points. He hit five of 11 from beyond the three-point arc. 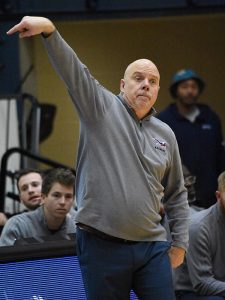 UTSA coach Steve Henson says he won’t use injuries as an excuse for a six-game losing streak and a 1-9 record in Conference USA. – Photo by Joe Alexander

Another bright spot was forward Isaiah Addo-Ankrah, who returned from a left wrist injury that had kept him out for nine games and more than a month. A right-handed shooter, he hit two threes and scored 12 points in almost 20 minutes of playing time.

Addo-Ankrah described the mood in the locker room as “a little down.”

“We’re angry, tired of losing,” Addo-Ankrah said. “We know we should have won that one today. We just didn’t execute on some possessions. It only comes to — what did we lose by, five? — we only lost by two possessions. It’s just the little things that we could have done better.”

Point guard Japhet Medor, UTSA’s leading scorer, sat out for the second-straight game with a sprained right foot. Medor suffered the injury in Wednesday’s practice, and on Thursday night, he missed his first game of the year.

He tried to practice Friday and discovered that he could run in a straight line, and that he could also back-pedal, but that he had trouble moving from side to side. So, he remained in the walking boot on Saturday.

UTSA will monitor him closely next week to see if he can play at North Texas.

It was a tough week all the way around for the Roadrunners. Without Germany, they lost to Rice, 88-81, in overtime on Monday. Even with Germany back, they dropped an 83-64 decision to 24th-ranked Florida Atlantic on Thursday as Medor sat on the side, his foot in a boot.

Finally, they fell too far behind FIU on Saturday (by 18 early in the second half) and, without Medor again, just couldn’t catch up. Even with the losses, the worst of the week for Henson might have been news that he thought he might get a few days ago but never did. 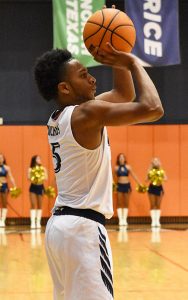 Freshman guard DJ Richards pumped in 18 points for his 13th game of the season in double figures. He’s averaging 11 points and 4.7 rebounds. – Photo by Joe Alexander

He was expecting to hear from the NCAA on the eligibility status of 7-foot center Carlton Linguard, Jr., and he still has not heard a word, so the waiting game continues.

In the meantime, Linguard is trying to get healthy. He’s made it through a knee injury. Now he’s trying to make it through rehabilitation from a concussion, hoping to start full-contact soon — perhaps next week.

“Last several days he has not been doing anything in contact,” Henson said. “He can do all the skill work, all the shell offense, the offense dry. Pre-practice, ball handling, he can do all of that. We’ll see how he responds Monday and Tuesday and maybe get him back in there full speed by Tuesday or Wednesday, hopefully.”

Even if Linguard gets healthy enough to play and is also cleared by the NCAA, a decision will loom as to whether he sees the floor this spring. Does he come back and play in the second half and burn a year of eligiblity?

If so, he would only have one year left to play for the Roadrunners. If he doesn’t play this spring, Linguard would have two years left.

.@KrivokapicPetar set it off in the first half with 4⃣ treys 🔥#Toughest40🌴🏀 pic.twitter.com/nYlwq0U4N5