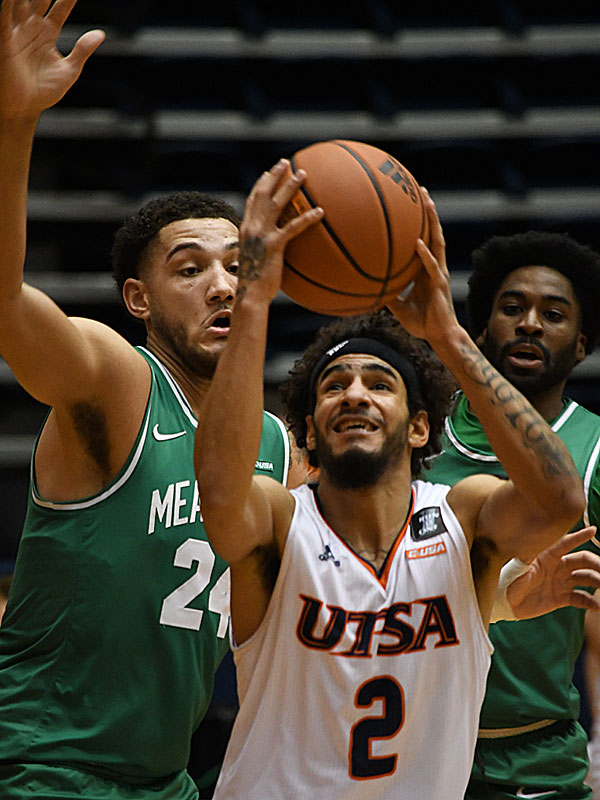 Jhivvan Jackson carried UTSA offensively with 26 points, but a rally fell short at the end, and the Roadrunners dropped to 0-3 in Conference USA. — Photo by Joe Alexander

Despite a spirited effort and comeback in the second-half Friday night, the UTSA Roadrunners failed to capitalize on an opportunity to beat the defending champions in Conference USA.

The North Texas Mean Green made just enough plays in the final two minutes to hold off the Roadrunners 77-70 in Game 1 of a two-game C-USA series at the Convocation Center. 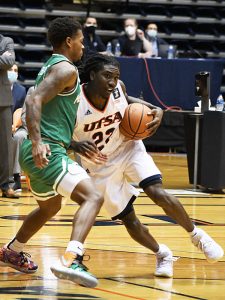 UTSA senior Keaton Wallace scored 12 of his 14 points in the second half. — Photo by Joe Alexander

With the loss, UTSA starts the conference phase of the schedule at 0-3 for the first time in Steve Henson’s five seasons as head coach of the Roadrunners.

The coach, however, was hardly discouraged.

“If we play with this mindset,” Henson said, “I think we’ll have an opportunity to win some games. To come within one point and not finish it off was disappointing. We’ll just have to play a little better.”

The Roadrunners will get another opportunity right away, with the second game of the back-to-back set for 3 p.m. Saturday at UTSA.

“We’re just trying to stay positive,” said UTSA guard Jhivvan Jackson, who led the Roadrunners with 26 points and played the entire 40 minutes. “We can’t be dreading it too long. We know what to do. We were already talking about it in the locker room.”

Early in the second half, North Texas moved out to a 14-point lead on UTSA and looked as if it might run away with the victory. A three-pointer by Mean Green guard Mardrez McBride made it 48-34.

From there, the Roadrunners steadied themselves and started chipping away. Back-to-back three-pointers from Jordan Ivy-Curry pulled UTSA to within eight with 7:47 left.

When Keaton Wallace hit a 15 footer, a free throw and scored on a strong drive, it was a one-point game, with the Mean Green clinging to a 69-68 lead.

At that juncture, the game turned in North Texas’ favor.

For UTSA, Jackson misfired on two three-point shots and Wallace one. North Texas, meanwhile knocked down six of eight at the free-throw line for a 74-68 lead with 48 seconds left.

The Roadrunners never came closer than five the rest of the way. 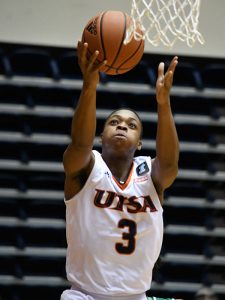 Jackson, 26 points on 11 of 24 shooting; Keaton Wallace, 14 points on four of nine, also four rebounds and three assists; Jacob Germany, 10 points and eight rebounds, with three of nine shooting. Jordan Ivy-Curry, eight points off the bench, including two threes late. As a team, UTSA shot 50 percent from the field in the second half and finished at 41.3. Battling a groin injury, junior forward Cedrick Alley played only eight minutes, scoring two points.

North Texas at a glance

Thomas Bell, 17 points, five rebounds, three assists and three blocks. Bell hit seven for nine afield and three for four from three. Javion Hamlet, 15 points, including five on free throws in the last minute. Also, 6 rebounds and 5 assists; Zachary Simmons, 13 points, including nine in the second half. Also, 6 rebounds and 3 assists. Mardrez McBride, 13 points on four threes. As a team, the Mean Green made 51.9 percent of their shots. In the second half, North Texas shot 56.5 percent.