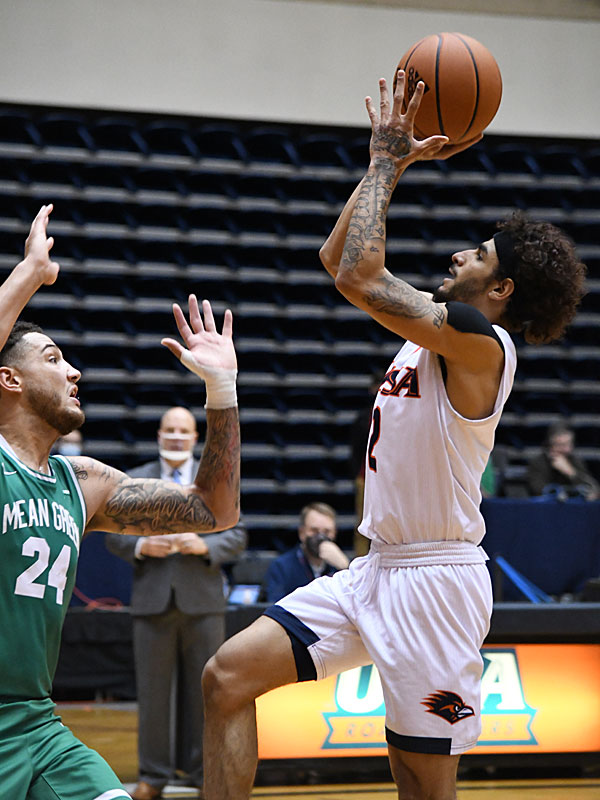 Weaving his way through traffic, pulling up for floaters or hitting from deep, Jhivvan Jackson scored 26 points in 40 minutes Friday night. — Photo by Joe Alexander

I wanted to drop a few opinions here in the lead-up to North Texas-UTSA, Part II. The Mean Green defeated the Roadrunners 77-70 in Game 1 of a two-game, Conference USA series Friday night at the Convocation Center. The two ball clubs meet again today, in the same arena, on UTSA’s home floor. Tipoff is at 3 p.m.

First of all, North Texas looks like a team capable of winning another championship. The Mean Green have everything. A point guard who runs the show. Players who can pass it and catch it. Players who are smart and know what to do when they’re under pressure. Players who defend aggressively. Point guard Javion Hamlet? He’s a handful. Forwards Thomas Bell and Zachary Simmons? I don’t remember them being game-changers last season, but they were Friday night. 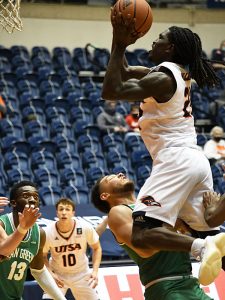 Next, I go back and forth between notions that the Roadrunners can be a good team this year, or, alternately, that they lack the right pieces in place to make a serious run in March. When my my thoughts drift to the second part of that notion, I think, what are they missing? Well, maybe they need a creative point guard, a distributor, an assertive force who can take over a game without shooting.

In Jhivvan Jackson, Keaton Wallace and Erik Czumbel, they have three really talented combo guards. Jackson and Wallace are at their best when they can roam the perimeter for catch-and-shoot opportunities. The faster the pace, the better.

Wallace and Czumbel are excellent defensively. But the offense tends to bog down when either runs the point for too long. Jackson is the best distributor and is the most creative of the three on the dribble. But if he brings it up time after time, his effectiveness as one of the nation’s best scorers decreases.

Alternately, I tend to think that the Roadrunners may, in time, work all this out in the coming weeks. Maybe they’ll mesh all their talents together and rip off a series of victories. It has a chance to happen, I think, if a couple of things happen. First, I’d like to see Jackson start at an off-guard position as he did Friday night. Give him the green light to shoot until he gets hot. Same with Wallace.

Both are smart enough players to be able to keep their teammates involved. But the team is built on their talents. Let them go to work. As for Czumbel, he’s starting to get more aggressive when he brings the ball up or when he runs the half court offense. Just give him some time to grow.

Next, they’ll be instantly better on defense when Cedrick Alley, Jr., returns to full speed. Right now, he’s limited with a groin injury. Remember, last week at Rice, Alley enjoyed a great first half before the groin tightened up on him. Get him back in the flow, and he could become a force as a two-way player, an aggressive defender and rebounder, and also one who can also knock down shots.

Today, the Mean Green probably have the edge. Jackson played 40 minutes Friday night. Weaving his way through traffic, finding open spaces, rising up for clever shots in the mid-range, UTSA’s all-time scoring leader was as good as he’s ever been. It may be too much to ask him to do that again in 18 hours. So, others will need to play well. But, as mentioned, North Texas looks like it’s built of championship timber. UTSA is still building.