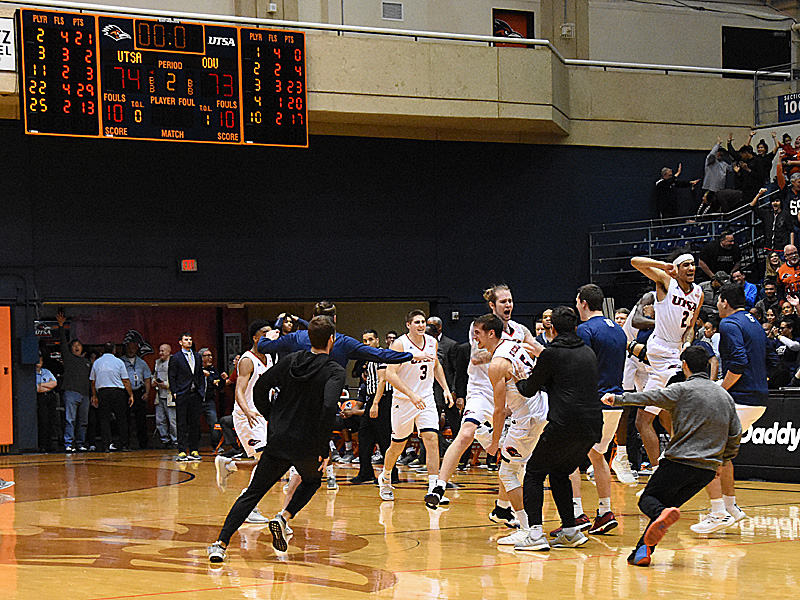 UTSA players celebrate after time runs out in the Roadrunners’ come-from-behind, 74-73 victory over Old Dominion on Saturday at the Convocation Center. – Photo by Joe Alexander

Trailing by 18 points with a little less than five minutes remaining Saturday afternoon, the UTSA Roadrunners appeared well on their way to a blowout loss at home against the rugged Old Dominion Monarchs.

As it turned out, appearances didn’t mean all that much on a magical day at the UTSA Convocation Center. 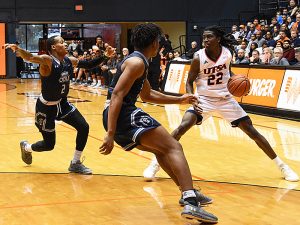 Keaton Wallace scored a game-high 29 points with nine 3-pointers, including the game winner with 15 seconds remaining. – Photo by Joe Alexander.

The Roadrunners rallied with a miraculous 25-6 run in the final 4 minutes and 43 seconds to defeat the Monarchs, 74-73, seizing a share of the lead in Conference USA.

“I’m at a loss for words,” UTSA guard Keaton Wallace said. “That was a great team win.”

A steal by Byron Frohnen set up the winning play for UTSA.

It gave one last possession to the Roadrunners, who watched as Wallace brought the ball up and circled into the right corner.

From there, he launched an off-balance three-pointer that swished with 15 seconds remaining to account for the final score.

Old Dominion immediately pushed the ball to the other end, only to miss on three shot attempts to win the game.

After the last miss by Justice Kithcart, the horn sounded, prompting the crowd to erupt with a roar.

With fans standing and cheering, UTSA players rushed off the bench to celebrate the program’s largest comeback since officials started charting such things in 2006-07.

Nick Allen promptly hit a three for UTSA. But B.J. Stith sank a two, keeping the Monarchs comfortably in front, 69-52, with 3:44 remaining. 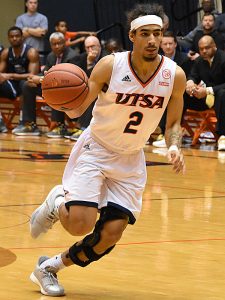 They came roaring back to win, generating significant momentum in the C-USA title chase along the way.

Knocking off a team that had held the lead in the conference was significant. It elevated UTSA into a three-way tie for first with North Texas and UAB, with all three at 6-2.

Old Dominion dropped to second at 6-3.

“We needed to win a game like this,” UTSA coach Steve Henson said. “North Texas has a good record. But to this point, we haven’t beaten many of the real good teams … This was a big win for us, from that standpoint.

“You know, Old Dominion is one of the favorites for the league title. You know, long way to go. But, we’re in a good spot right now. We’re healthy. Chemistry is fantastic. Guys are embracing their roles. That gives us a chance to win every night.”

The Roadrunners swept the homestand, knocking off Charlotte 88-43 on Thursday night and then defeating Old Dominion with the historic game-ending rally. UTSA has won 9 of its last 11 and 12 of 16 leading into next week’s road trip to Western Kentucky and Marshall. The Roadrunners have won eight in a row at home. Wallace tied a career high with nine three pointers.

“You know, I’m not even really sure what happened.” — UTSA coach Steve Henson in his opening remarks to reporters.

“We actually practice that shot, fading to the baseline. I already knew it was going in.” — UTSA guard Jhivvan Jackson, on Keaton Wallace’s game winner.

Guard Xavier Green drains a three-point shot early in the second half as the Old Dominion Monarchs start to pull away.

Grinding it out early

Riding the steady play of Stith and Caver, the Monarchs surged to a 40-36 lead on UTSA at halftime. Stith scored 17 points and Caver had 10 for Old Dominion. Much to the chagrin of the UTSA home crowd, the Monarchs aided their cause with 12 of 15 shooting at the free-throw line, including 8 of 9 by Stith. For UTSA, Jackson missed 11 shots from the field. But, fortunately for the Roadrunners, Wallace scored 17 in the half on five threes.

Old Dominion started to dominate the game after intermission. UTSA’s offense seemed stagnant, and ODU took advantage. In one stretch, the Monarchs outscored the Roadrunners 15-2, with point guard Ahmad Caver scoring seven of the points.

With 4:43 remaining, Caver sank a jumper to give Old Dominion a seemingly insurmountable 67-49 lead.

From there, UTSA outscored the visitors 25-6 to the buzzer. During the run, the Roadrunners held the Monarchs to a field goal by Stith and four free throws. Fouled intentionally on most possessions, ODU made only 4 of 10 at the line down the stretch.

The Roadrunners, on the other end, were lighting it up with seven 3-point baskets. Wallace hit three of them, and Jackson and Allen hit two apiece. During the streak, Jackson scored 10 of his team’s points, with Wallace adding nine and Allen six.

Jackson hits the deck after his layup drew UTSA to within two with 32 seconds left.

Wallace was clutch in the last 90 seconds, hitting all three of his 3-pointers in that stretch. First, he nailed one that brought the Roadrunners to within five with 1:15 remaining. Next, he hit again with 42 seconds left to make it a three-point game.

On the other end, Stith answered with one of two free throws, giving Old Dominion a 73-69 edge wth 37 seconds left. Five seconds later, Jackson flashed to the basket, received a pass from Byron Frohnen and sank a twisting layup to pull the Roadrunners within 73-71.

At that point, Frohnen made another big play, forcing a Stith turnover, which set up Wallace’s game-ending dramatics. Wallace got to the corner and swished it for the game’s final points. On the other end, Xavier Green, Stith and Kithcart misfired for Old Dominion, giving the win to UTSA.

Emotions overflow on the UTSA bench and throughout the Convocation Center at the end of Saturday’s game. After Wallace hits out of the corner for the go-ahead basket, Old Dominion misses three times in the last 15 seconds, setting off a wild celebration.