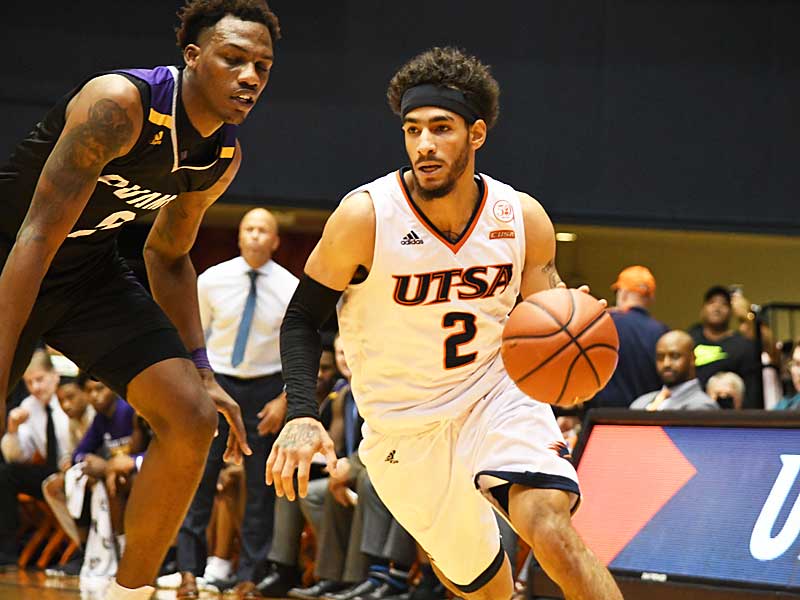 Jhivvan Jackson scored 30 points for UTSA against Prairie View A&M. It was Jackson’s second 30-point game in a row and his third of the season. — Photo, Joe Alexander

The Prairie View A&M Panthers on Saturday night raced off on a 19-0 streak early in the game and made it stand up late for a 79-72 victory over the UTSA Roadrunners.

Senior guard Gerard Andrus led the Panthers with 20 points and 10 rebounds to hand UTSA its sixth loss in seven games this season, and its first at home.

After Keaton Wallace scored on a drive to pull the Roadrunners to within three with 29 seconds remaining, Andrus hit four straight free throws to help the Panthers put it out of reach.

‘A favorable match up’

Prairie View coach Byron Smith said his team brought momentum into the game after beating Central Arkansas in a neutral-site game in its last outing.

The Panthers knocked off the Bears 78-72 in overtime Saturday at Riverside, Calif., in the 2K Empire Classic.

“I think it just kind of pumped us up and we came out and got after it (tonight),” Smith said. “Obviously (UTSA is) a quality team. We felt like it was a favorable match up. UTSA is a good program and they’re going to be a really good team. They’re struggling a little bit.

“We thought our chances were good tonight, and we just got after them. We were ready to play from the opening tap.”

UTSA was hopeful that it had turned the corner after winning its last game, a 90-78 victory last Friday at home against NAIA Wiley College.

Prairie View had other ideas, shooting better than 50 percent from the field in both halves and finishing 30 of 54 for 55.6 percent.

On the other hand, UTSA couldn’t find the basket early against a Prairie View match up zone, allowing the Panthers to turn a 4-2 deficit into a 21-4 lead.

The Roadrunners misfired on eight straight shots during the Panthers’ run, including six 3-point attempts.

The Panthers, surprisingly, led for the rest of the game in front of an announced 888 fans at the Convocation Center.

“Frustrating,” UTSA coach Steve Henson said. “Just haven’t put together any stretch of days all season where we felt real, real good about things. We were hoping we were taking some little steps this week …

“Hoped we had made enough progress to find a way to win this game. We didn’t.”

But it was Andrus who put away the Roadrunners at the end with his free-throw shooting.

Asked if he liked Andrus at the line in tight situations, Smith laughed and said, “I like him anywhere. In an alley fight, he’s your guy. He’s going to step up. He’s going to make plays. He’s got a lot of toughness. He’s overcome a lot. He’s a great kid.”

The Roadrunners have struggled from three all season, making only 28.2 percent.

In his return to the Convocation Center, former UTSA guard Tamir Bynum scored seven points off the bench for Prairie View.

He hit all three of his shots from the field, including a driving layup with 14:06 remaining that capped a 7-0 run. Prior to the run, the Roadrunners had pulled to within one and were threatening.

Last fall, the former Houston-area high school standout played in nine games for the Roadrunners before transferring to Prairie View at the semester break. He averaged 1.9 points at UTSA.

Bynum has played in eight games for the Panthers this fall, averaging 4.9 points and 1.3 assists.

“Normally you’ve got to sit (out) a year but his mother had been ill, so he got a waiver and he was able to play immediately,” Smith said.