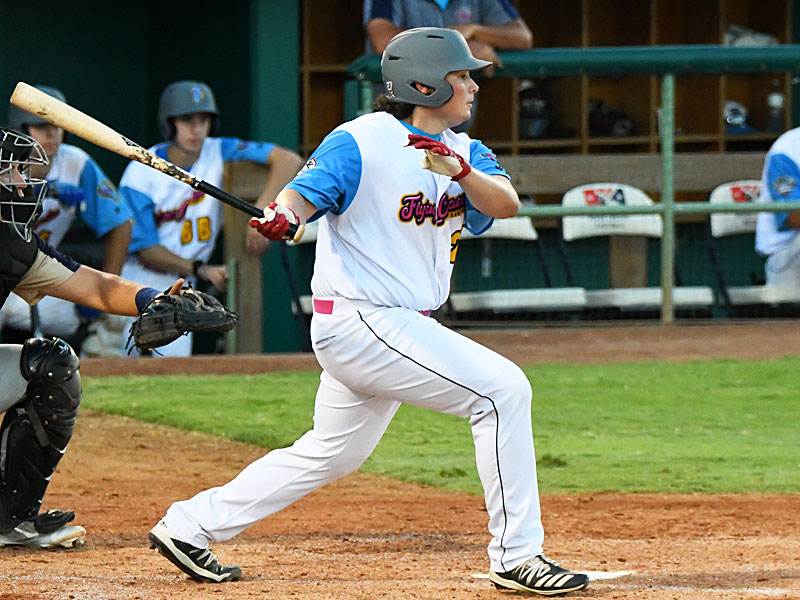 Ryan Flores doubled, had a sacrific fly and drove in three of the Flying Chanclas’ four runs against the Brazos Valley Bombers on Thursday at Wolff Stadium. – photo by Joe Alexander

Ryan Flores produced three RBI for a team-best 15 on the season Thursday night in pacing the Flying Chanclas de San Antonio to a 4-3 victory over the Brazos Valley Bombers.

A season-high crowd of 1,521 at Wolff Stadium watched as Chanclas starter Logan Garza pitched into the sixth inning to stifle the Bombers.

With the victory, the Chanclas (13-7) gained a game in the standings against the Bombers (12-9) in a duel for the South Division title in the Texas Collegiate League.

The teams will play another three games starting Friday night in Bryan, all at Travis Field. Both teams have nine to play in the regular season.

With the Bombers playing in San Antonio, the Chanclas made the best of it, winning two of three games this week. 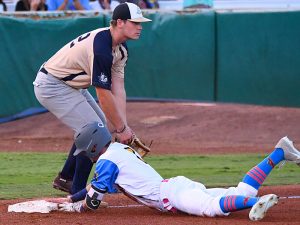 The Flying Chanclas’ Jordan Thompson slides into third with a fifth-inning triple against the Brazos Valley Bombers on Thursday at Wolff Stadium. Thompson also walked and scored twice. – Photo by Joe Alexander

Brazos Valley cruised 6-1 in the opener Tuesday night to take the lead in the South by a half a game, before San Antonio turned it on with a 15-2 victory Wednesday night.

On Thursday, the Chanclas jumped out to an early lead and then held off the Bombers at the end, improving to 9-3 in their last 12 games.

In the bottom of the first inning, Flores mashed a sacrifice fly ball to center to drive in Jordan Thompson to make it 1-0. In the top of the second, the Chanclas’ defense came up big with their second double play in two innings.

Flores drove in single runs in both the fifth and the seventh. In the seventh, he hammered an opposite field drive into the left field corner that scored Thompson and made it 4-1. He was out at third trying to turn it into a triple.

Garza pitched the first five innings and Johnny Panatex entered to take care of the next three.

Garza struck out eight and allowed the only run of the game in the sixth. Panatex was particularly effective, holding the Bombers scoreless on two hits while striking out four.

The Bombers made it interesting in the ninth, scoring twice and putting runners at first and second with two out against Garrett Egli.

Grayson Tatrow, who had two hits on the night, flared one to left that looked like it had a chance to drop for a hit. But Anthony Forte raced in to make the grab for the final out. 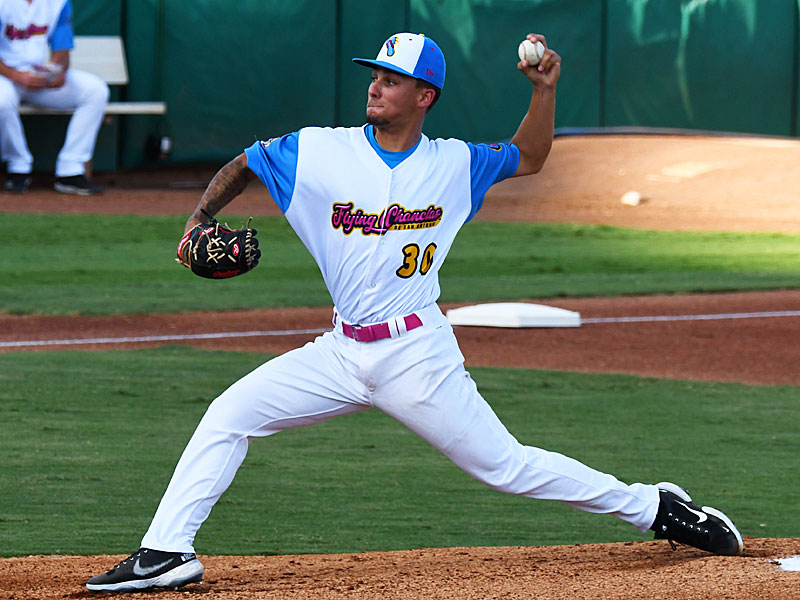 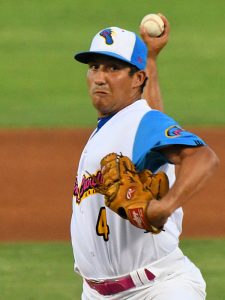 Flores and Thompson are both on batting tears. Flores, from Corpus Christi Carroll and the University of the Incarnate Word, is hitting .357 on a seven-game batting streak and .323 for the season … In the streak, he is 10 for 28 with seven RBI. He has driven in five runs in his last two games.

Thompson, meanwhile, is batting .538 in his last four games. In that stretch he is 7 for 13 with two doubles and a triple. The former standout at Boerne Champion High School has also scored seven runs. The burst has lifted Thompson’s batting average to .312 …