So many emotions were flowing on Sunday morning within the UTSA Roadrunners basketball program.

It was Senior Day, with veterans Nick Allen and Giovanni De Nicolao both set to play perhaps their last game at home.

On top of all that, the Roadrunners were hosting the dangerous UAB Blazers, with both teams bidding for a top-four finish in the regular season and a first-round bye in the Conference USA Tournament.

Adding even more drama, both Allen and Jhivvan Jackson were less than 100 percent physically. Through it all, the Roadrunners emerged with a 76-70 victory in front of 1,259 fans.

“I thought we fought really, really hard,” UTSA coach Steve Henson said. “Our defense was terrific … In the second half, (the Blazers) did knock down some three pointers. But overall our defense was great, our fight was great. 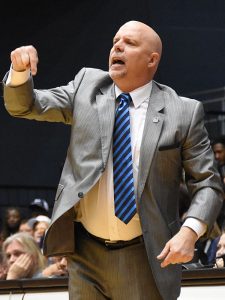 “Nick got hurt in practice yesterday and really couldn’t put his shoe on this morning.

“(He) fought like crazy and made some big plays down the stretch (with) offensive rebounds. (He’s) one of the physically toughest players I’ve ever been around. I’m so proud of him.”

Henson was equally impressed with Jackson, the leading scorer in Conference USA, who couldn’t practice the last few days with a left shoulder that he injured in Thursday night’s loss to Old Dominion.

The loss to ODU left UTSA looking at the possibility of an 0-2 record to open C-USA bonus play in the five-team Group 1, with two games yet to play on the road to complete the regular season.

After the season, Group 1 teams will be seeded into the C-USA postseason tournament, with the top four earning first-round byes. Now, after Jackson scored 27 points and Keaton Wallace added 22, the Roadrunners put themselves in good position to earn a bye.

It’s especially important for UTSA, a team that plays with a seven- or eight-man rotation.

“(A bye) is big for anybody,” Henson said. “You win the tournament and you go to the Big Dance (the NCAA Tournament). It’s a much bigger chore if you have to win four days in a row, rather than three. Any of those top four seeds have a big advantage by not having to play that first day.”

x-clinched regular-season title and top seed in the tournament

Before the game, UTSA honored seniors Allen and Toby Van Ry. They also honored juniors De Nicolao and Mitar Stanocevic, who are graduating early. De Nicolao said afterward that it likely would be his last regular-season game at home for UTSA. He indicated he likely would play professionally next season in his native Italy. UTSA also celebrated the contributions of student manager Danny Soto.

The Roadrunners took charge of the game early, holding UAB to 35 percent shooting in the first half. They also cashed in on the other end, hitting 53.6 percent, including 6 of 12 from three.

UTSA is shooting for its first NCAA tournament berth since 2011. The only way to get there is to win the C-USA tournament, which is scheduled March 13-16 in Frisco.

If the Roadrunners come up short of the Big Dance, Henson said a possibility exists that they could play in the postseason in one of the other events — the NIT, the CBI or the CIT.

Jhivvan Jackson buries another three for the Roadrunners at the halftime buzzer. UTSA leads 36-26. A UAB coach is not amused at the defensive breakdown. https://t.co/hyCDEtJ4sq pic.twitter.com/JBSt8ErsAx

Jackson and Wallace buried three-point baskets in the last minute of the first half as UTSA assumed a 36-26 intermission lead against the UAB Blazers.

UTSA's Keaton Wallace nails a long three in last minute of the first half. https://t.co/hyCDEtJ4sq pic.twitter.com/khyvV1oLDZ

At a pivotal moment in the season, the Roadrunners came out with energy and took control of the game almost immediately.

They shot 53.6 percent in the first half, with Jackson and Wallace combining for 23 points.