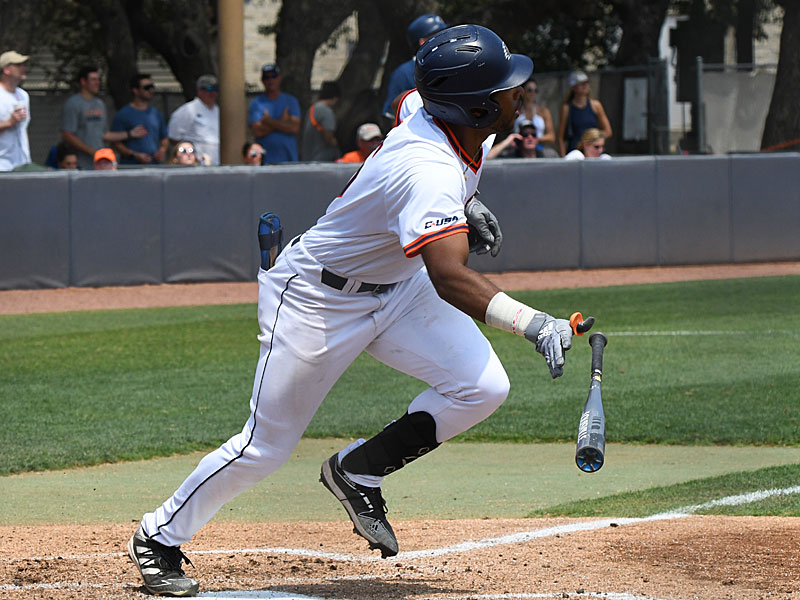 Ian Bailey crushes the first of his two home runs Saturday in UTSA’s regular-season ending victory over the UAB Blazers. UTSA (35-19 overall, 19-11 in Conference USA) will move into postseason play next week in Mississippi. The fifth-seeded Roadrunners are scheduled to open the C-USA tournament Wednesday at 7:30 p.m. against the No. 4-seed FAU Owls. – Photo by Joe Alexander

The UTSA Roadrunners completed the regular season in style on Saturday, by pitching well and by hitting four homers in a 12-2 victory over the UAB Blazers.

After polishing off the Blazers in a game called after seven innings on the run rule, UTSA players mingled with fans and friends, taking pictures and soaking up the moment. 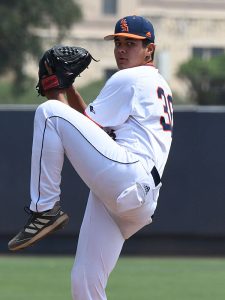 Ulises Quiroga rocks and fires against the UAB Blazers. Quiroga pitched four innings, allowing only one run on two hits, to earn the victory. – Photo by Joe Alexander

It seemed like a perfect time to rattle off the essential numbers for the Roadrunners — a 35-19 record overall and, more importantly, a 19-11 finish in Conference USA.

Beaten soundly on Thursday night by the Blazers, the Roadrunners rebounded to win Friday night and again Saturday to take two of three in the final series of the season and to establish themselves as one of the conference’s upper-echelon teams.

They’ll start play in Hattiesburg next Wednesday, competing in an eight-team, double-elimination event for the C-USA postseason crown. The Roadrunners are seeded fifth and will take on the four seed Florida Atlantic Owls in their opener.

The game is set for 7:30 p.m. Wednesday at Pete Taylor Park.

The C-USA winner next week claims the conference’s automatic bid to the NCAA tournament. But because of the Roadrunners’ strong play throughout the season — they were 48th in the national ratings percentage index on Sunday morning — they might not necessarily have to win the whole thing in Hattiesburg to make the 64-team national field.

It may only take two or three victories. 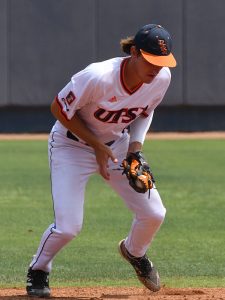 Kody Darcy started at shortstop against UAB in the last game of the season at Roadrunner Field. At the plate, he contributed a sacrifice bunt that moved runners up in a two-run sixth and a two-run triple in the six-run seventh. – Photo by Joe Alexander

“We got a little more work to do,” Hallmark said. “We’ve got some games ahead of us at the (C-USA) tournament. (We want to) get over there and win some and try to make an at-large (NCAA bid.) If nothing else, win four over there (for the title) and lock it up.”

UTSA’s dreams of becoming the school’s first NCAA tournament entry in baseball since 2013 were dimmed on Thursday night when UAB erupted for an 18-7 victory. In the loss, the Roadrunners looked sluggish. They gave up a couple of long home runs and made a season-high five errors.

But, as it turned out, they weren’t down for long. By Friday night, they re-discovered their home-field magic, hitting five home runs en route to a 7-2 victory to even the series. UTSA pounded three of the homers in a five-run eighth inning.

On Saturday, not only did they shut down the Blazers for the second game in a row, limiting the visitors to four hits, but they also kept bashing balls out of the park. The Roadrunners hit four more homers, including two of them by senior Ian Bailey. 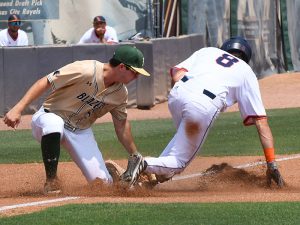 Leyton Barry went four for four at the plate and stole two bases. Here, he’s safe after doubling and stealing third in the bottom of the second inning. – Photo by Joe Alexander

Hallmark was at a loss to explain the turn-around from a less-than-memorable Game One against the Blazers.

“This weekend, you win two out of three against a tough team, a 30-win team, you got to feel pretty good about yourself.”

UTSA will play next week in the Conference USA tournament. The site is Hattiesburg, Miss. First games are Wednesday.

Fifth-seeded UTSA plays four seed Florida Atlantic on Wednesday night. If it wins, it would advance to meet the winner between one-seed and regular-season champion Southern Miss and eight seed UAB. That winner’s bracket game would be Thursday night.

The double-elimination event will run for five days through next Sunday. The NCAA tournament field will be unveiled the following Monday, on May 30, with the first games in the regionals set for June 3.

UTSA has some concerns going into Hattiesburg, with ace reliever Simon Miller nursing a sore back that has kept him out of the lineup for the last five games. Also, a few other pitchers in the bullpen haven’t been available lately because of injuries and aren’t expected to be back. Thus, it may fall on the offense to carry the team.

One of the positive signs is the resurgence of Ian Bailey. Bailey, a graduate student from Stevens High School, went two for two on Saturday with two solo home runs to give him three homers in his last two games and a team-high 15 for the season. In three games against the Blazers, Bailey was locked in. In 10 at bats, he had six hits and four RBIs.

Other notable developments included solid pitching performances from Jacob Jimenez, Braylon Owens and Luke Malone on Friday and from Ryan Ward, Ulises Quiroga and Fischer Kingsbery on Saturday. Quiroga was particularly good, working four innnings, giving up only one run on two hits and striking out six in the series finale.

Bailey, who started his collegiate career at Grambling University in Louisiana, was humbled after the home finale by the greetings he received from family and friends in the wake of his last game at Roadrunner Field.

“Honestly, I’m just very thankful for all the support, not just for myself, but for the team in general,” he said. “Without these people, we wouldn’t be where we are today. I’m just super thankful that they came out to support the team.”

And how did he feel about the way the team played this weekend? “We came out slow (on Thursday). But over the course of the weekend … we just turned (on) another gear, especially last night. We just found another gear and hit our stride.”

What happened between Thursday night’s loss and Game Two on Friday night?

And what of his own performance, finding his power stroke after not hitting a home run in six straight games?

“This past week, I had been in a little rut. With Coach Hallmark and the coaches, we went to the cage and just ironed it out. I came out with a lot more confidence. I was just really trusting in my approach. Good things happened.”

Here are a few highlights from UTSA’s 12-2 victory Saturday over the UAB Blazers:

Ryan Flores touches all the bags after a two-run homer in the B1. UTSA leads 2-0. https://t.co/hyCDEtJ4sq pic.twitter.com/VPkuaV14jD

UTSA's Jonathan Tapia delivers a 2-run single, boosting the Roadrunners into a 6-2 lead. UTSA still batting in the B6. https://t.co/hyCDEtJ4sq pic.twitter.com/RCjddHBFTD

Leyton Barry is 4-for-4 after smacking this RBI single into centerfield, scoring Poston.

DARCY! Kody with a two-run triple to stretch our lead to 10-2 in the bottom of the seventh. #BirdsUp 🤙 pic.twitter.com/VGynmud7J7

KENG! Chase with a two-run homer that gives us a walk-off, run-rule victory, 12-2 after seven innings, claiming the series!

It's Chase's eighth homer of the year. His 56 RBI are the ninth-most in single-season history. #BirdsUp 🤙 pic.twitter.com/DxpMFiAIag