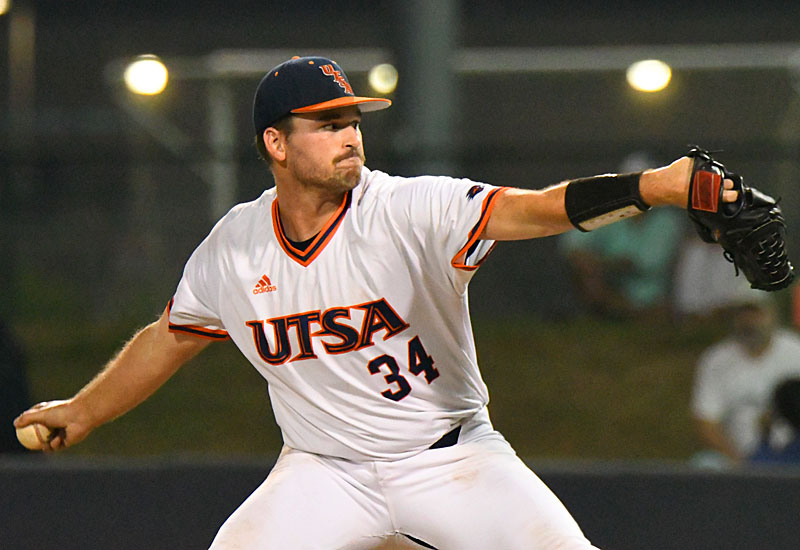 Pitcher Luke Malone was one of four UTSA players to receive all-Conference USA honors this week. Malone made the C-USA’s first team. – Photo by Joe Alexander

Coming off their best regular season in nearly a decade, the UTSA Roadrunners are given a fair chance to play another day even after the conclusion of this week’s eight-team Conference USA baseball tournament.

Of course, the Roadrunners can control their own destiny. If they can win the C-USA postseason title this week in Hattiesburg, Miss., then they’ll qualify automatically to play in one of 16 NCAA regionals next week.

And if they come up short of the C-USA title? Well, at that point, it becomes a waiting game to find out if they have done enough over the course of the entire season to claim an at-large bid.

Editors at d1baseball.com have projected that by the end of the weekend, when final touches on a 64-team NCAA bracket will be made by a national committee, the Roadrunners will make it in.

One of the most respected outlets covering the college game, D1Baseball projects that the last four teams invited into the national field will be North Carolina State, UTSA, Old Dominion and Clemson.

The website predicts that C-USA regular-season champion Southern Miss will earn a No. 9 overall seed nationally and will host one of the regionals on opening weekend. The site also predicts that Louisiana Tech, Old Dominion and UTSA will make the field from the C-USA.

Obviously, nobody knows for sure what will happen this week, and that’s why the coming days are so interesting.

Media projections on the makeup of the NCAA field can be upended when teams with poor records rise up and win a conference tournament. At that point, the question becomes whether the high seeds in those conferences have done enough to warrant selection as an NCAA at-large team.

The more upsets that happen, the more that teams such as UTSA and Old Dominion start to get nervous. Really, UTSA coach Pat Hallmark was already getting anxious about it last Saturday after his team (35-19 overall, 19-11 C-USA) had won its last game.

“We got a little more work to do,” Hallmark said. “We’ve got some games ahead of us at the (C-USA) tournament. (We want to) get over there and win some and try to make an at-large (NCAA bid.) If nothing else, win four over there (for the title) and lock it up.”

It’s been suggested that the Roadrunners may need to win at least a couple of games, possibly even three, to feel comfortable about pulling down the at-large bid. Hallmark just isn’t sure how it will shake out.

“I think we’ll need to win at least one, for sure,” he said. “Two would be nice. More than two would probably secure it. I don’t know.”

Hallmark, whose team is 47th in this week’s national ratings percentage index, talked to Southern Miss coach Scott Berry about life on the tournament bubble a few weeks ago.

“You hear horror stories,” Hallmark said. “He told me they had an RPI in the 30s one year and didn’t get in. At the end of the day, we’re just going to try and play good baseball … Because, that’s all you can really do. You can’t always control the end result.

“But, you can theoretically control playing (well). We’re just trying to play (well), and more times than not, that’s going to equal a win.”

The C-USA’s fifth-seeded Roadrunners will take on the four seed FAU Owls tonight at 7:30. It’ll be the last of four games played today.

If they win, they can avoid the always-perilous losers’ bracket and play again at 7:30 Thursday night. That would be against either the top-seeded Golden Eagles or the eight seed UAB Blazers.

The tournament continues through Sunday. On Monday, the NCAA bracket will be unveiled. UTSA hasn’t played in an NCAA tournament since 2013.

Pitcher Luke Malone and infielders Jonathan Tapia, Leyton Barry and Matt King have all earned Conference USA honors. Malone made the C-USA first team. Tapia and Barry were on the second team. King made the all freshman team.