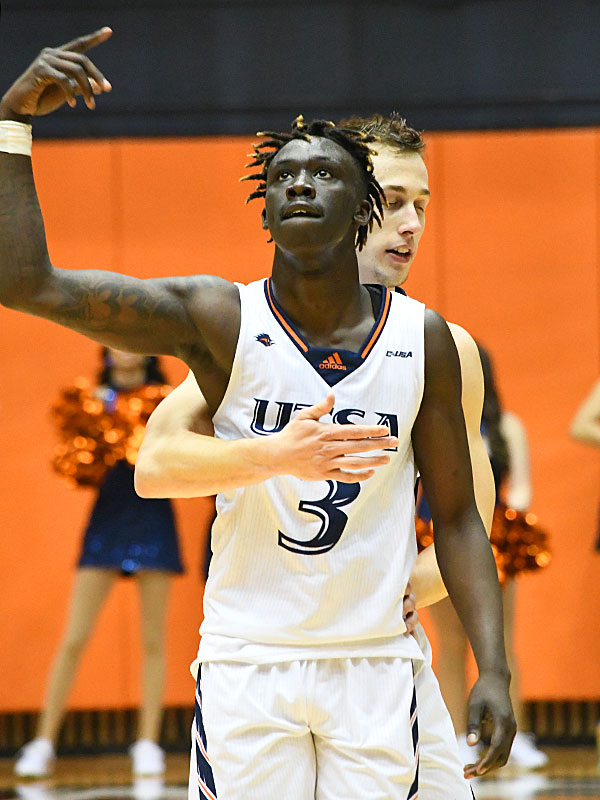 UTSA’s Erik Czumbel embraces Dhieu Deing after a play late in the game as the Roadrunners hold off the FIU Panthers 73-66 at the Convocation Center. Deing had 19 points in his first game back after leaving the squad in the first week of January. – Photo by Joe Alexander

The losing streak is over. UTSA ended a troublesome six-game skid Thursday night by battling from behind in the second half to take down the FIU Panthers, 73-66.

As a bonus, the Roadrunners notched their first win in Conference USA this season. “We needed it badly,” UTSA coach Steve Henson said. “There’s no secret about it.”

The streak was the longest in Henson’s six years at UTSA and the longest overall since the Roadrunners lost nine in a row near the end of 2015-16, which was the last season in Brooks Thompson’s tenure as coach. 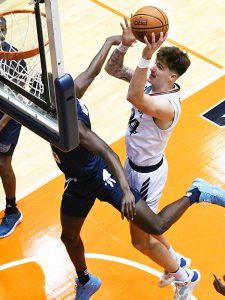 Playing against a 7-foot-1 center, UTSA post Jacob Germany scored 11 points and pulled down eight rebounds in the second half. He had 23 and 11 for the game. – Photo by Joe Alexander

In facing FIU, a big and physical C-USA East Division team with a winning record, 6-foot-11 center Jacob Germany produced a double-double with 23 points and 11 rebounds.

Dhieu Deing added 19 points, including 15 in the second half. Jordan Ivy-Curry supplied 17 points, four rebounds and three assists as UTSA won for the first time in 24 days.

The Roadrunners, fighting against an extended stream of adversity during the month of January, have seen the season come to an end for Cedrick Alley, Jr. and Aleu Aleu.

Alley is academically ineligible and Aleu has suffered a right knee injury that required surgery.

All that notwithstanding, two of the most severe blows to the team came with the loss of Deing and Ivy-Curry.

Without them, defenses keyed on Germany and clogged up the paint. Players who hadn’t been shooting the ball much were forced to look at the basket, with only mixed results. 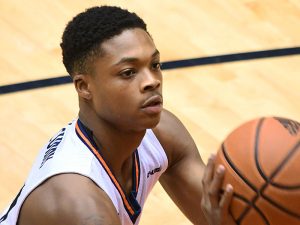 Jordan Ivy-Curry scored 17 points in his first game back after sitting out four in Covid protocols. He hit a three with five minutes left that helped to fuel a late UTSA rally. – Photo by Joe Alexander

The Roadrunners were 1-6 without Deing (the only win coming against Dallas Christian) and 0-4 without both Deing an Ivy-Curry.

Deing, a 6-foot-5 junior transfer, said it “felt big” to earn the victory in his first game back.

“I prayed a lot on it,” he said. “I just felt like I couldn’t quit on my team like that. So, me, personally, I just (wanted to) do anything I could to win.”

Deing, who nailed three 3-point shots in the second half, said he thinks the difference down the stretch may have stemmed from the Roadrunners starting to learn how to play and pull together when the times get tough.

Deing actually had re-joined the team last week, but had to go into Covid protocols and ended up sitting out a couple of losses to the UTEP Miners, one on the road ane one at home. 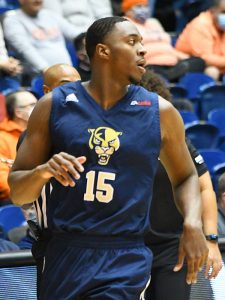 He described his return as emotional.

“I think they’re always going to be my brothers,” he said. “I apologized. I told him I was sorry I quit on ’em. I was just happy to come back and take some dubs with this team.”

In the aftermath of a road loss at UAB on the first day of the New Year, tensions mounted when the team got back home.

Deing sat out on Jan. 3 against Dallas Christian, and then UTSA released a statement on Jan. 6 saying that he wasn’t on the team and was looking at options in pro basketball.

In regard to his other options, Deing said he considered “a lot of things” but did not sign anything.

After FIU bell behind and trailed most of the first half, at one time by as many as 14 points, the Panthers gradually climbed back in the game after intermission and took the lead with 7:57 left.

With point guard Tevin Brewer orchestrating the attack, FIU continued to press the action and pushed the advantage to Five. A floater by Brewer made it 61-56 in favor of the Panthers with 5:26 remaining. 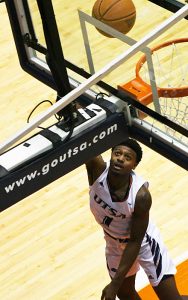 Guard Darius McNeill takes it to the hoop for the Roadrunners. – Photo by Joe Alexander

From there, the Roadrunners pushed back. Consecutive 3-pointers from Ivy-Curry and Deing vaulted UTSA back on top by one point.

Down the stretch, UTSA benefited from plays by Germany and Erik Czumbel, who hit another three.

Both Deing and Ivy-Curry, at the line with one-and-one situations late, came up big by knocking down two free throws in each instance.

“Teams high in the standings are often times playing a lot of close games,” Henson said. “They’re just finding ways to win those ball games. We needed to get this one to reinforce that, to get it off our back and build on it.

“Kind of the message here is, keep building.”

Germany was aggressive in pulling down five offensive rebounds, and he was efficient in hitting 10 of 18 shots. Coming against a team with a 7-foot-1 center (Seth Pinckney) and a few other wide-bodied forwards, it was clearly one of his better efforts of the season. 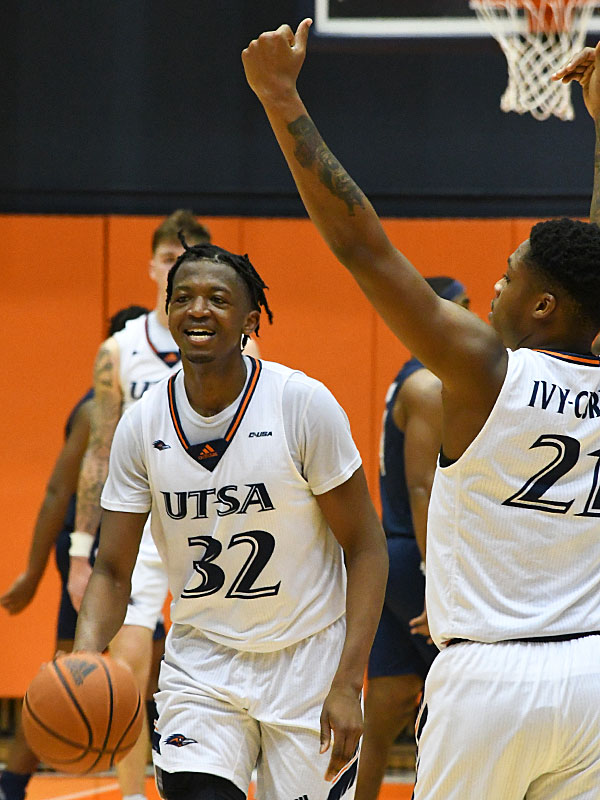 Isaiah Addo-Ankrah and Jordan Ivy-Curry celebrate after Addo-Ankrah grabbed the final rebound of the game. It was UTSA’s first win after 24 days and six straight losses. – Photo by Joe Alexander