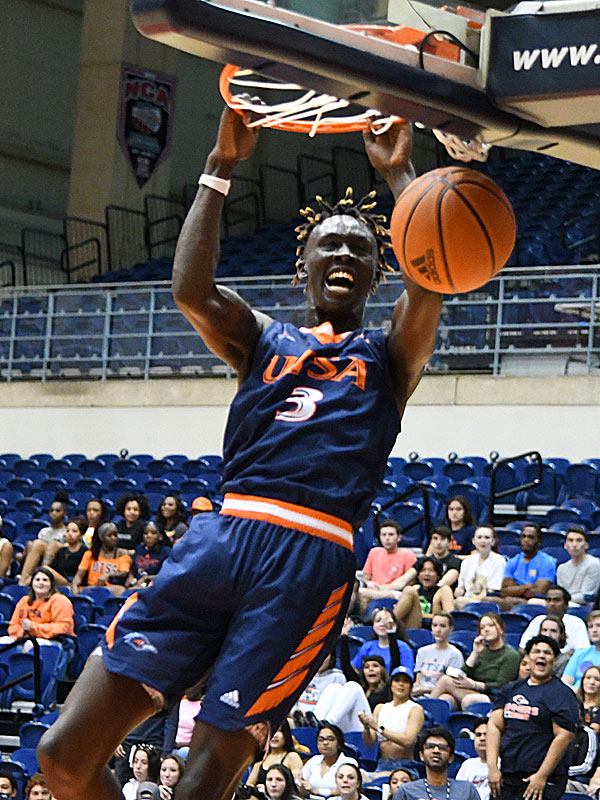 Was that an air of optimism in the UTSA Convocation Center on Tuesday?

Or, was it just that confounded draft blowing through the old basketball arena when someone would enter through the doors on the north side of the building?

It might have been a little of both. But, whatever it was, the slumping Roadrunners had more players on the gym floor for practice than they’ve had in awhile. 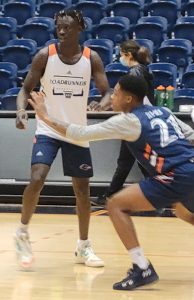 One of them was streak-shooting junior guard Dhieu Deing, who has been absent from practices and games for a little more than three weeks, reportedly not a part of the team as he considered options in the professional ranks.

Another player returning was sophomore guard Jordan Ivy-Curry, who has been out two weeks in Covid protocols.

Whether Deing will play against the Panthers remains to be seen, the coach said.

“I can’t say on Dhieu yet,” Henson said. “Juice will play. I’m sure Juice will play. Unless something happens. We expect Juice to play as much as he can handle. We’ll see how it goes in the next 48 hours with Dhieu.”

A game in Alabama against the UAB Blazers on Jan. 1 seemingly sparked some tensions in the UTSA program. In the team’s Conference USA opener, the Blazers routed the Roadrunners, 87-59, and Deing was held to 0-for-11 shooting.

Asked if Deing’s departure was a disciplinary measure, Henson said, “He was just frustrated. We were having a team meeting. We were discussing some things. And he stepped out … The next day, I think there was a lot on his mind at that point, a lot of pressure.

“He was just coming off the rough game against UAB. As a team, we were frustrated. We struggled as a team in that ball game. I just think there was a lot on his mind. He made a rash decision.

“We kind of had to let it settle down a little bit.”

Even after the announcement, Henson said he continued to talk to the former North Carolina prep standout. Pretty soon, the talk turned to the possibility that he could re-join the team.

“He basically said he didn’t want to leave his team that way,” Henson said. “We just had to work through all the details on it and make sure we were comfortable with it. (We) continued to think about what impact it would have.

“Just felt like it was the right thing to do, at least give him a chance to come back to practice.”

A possibility existed that Deing could have come back to practice last week, but the plans were scuttled when he went into contract tracing protocols, Henson said.

Instead, the 6-foot-5, shot-maker made his first appearance at practice since late December on Tuesday afternoon.

“A couple of weeks ago, I made a mistake,” Deing said in a statement released by the athletic department. “I was frustrated on the court and lost my focus. I made a quick emotional decision, and I regret it.

“My coaches were very supportive of me, and I am grateful for that. I apologize to my team and our fans. I hope to come back and help our team in any way I can.”

Deing started in UTSA’s first 13 games. He averaged 15.3 points and 5.7 rebounds, while shooting 35.4 percent from the field.

Hot and cold with his jump shot, Deing was at his best when he was most selective, scoring 20 or more points four times.

Ivy-Curry, meanwhile, sat out two games in December and then missed the last four, both times because of Covid issues. The sophomore from Houston is averaging 15.1 points in 14 games.

If both of them can return to form, it could make quite a difference for the Roadrunners, who rank last in the conference, averaging 66.7 points as a team.

On Sunday afternoon at home, the Roadrunners were boosted by the return of Christian Tucker and Josh Farmer, but the Miners pulled it out, 59-54.

Henson gave his players the day off on Monday, and on Tuesday, they gathered again. For the first time in weeks, Deing and Ivy-Curry were back on the floor together, and the energy picked up.

“It’s so helpful,” Henson said. “You can practice a little longer that way. Certainly we were able to get guys more reps at the right positions.”

If Deing gets back into the playing rotation, and it’s likely he will, the Roadrunners remain short-handed with 11 conference games remaining on the schedule.

Reserve center Adrian Rodriguez, a senior, retired from basketball with knee problems during preseason camp. UTSA announced last week that junior forward Aleu Aleu was also out for the season. Henson said he had surgery on his right knee.

In addition, Cedrick Alley, Jr., has been ruled academically ineligible.

FIU forward Clevon Brown, a grad transfer from Vanderbilt, grew up in San Antonio. He played at Churchill High School. Brown played four seasons with Vanderbilt in the Southeastern Conference. Now at FIU, he’s averaging 7.9 points, 6.0 rebounds and 1.3 blocked shots for the Panthers.