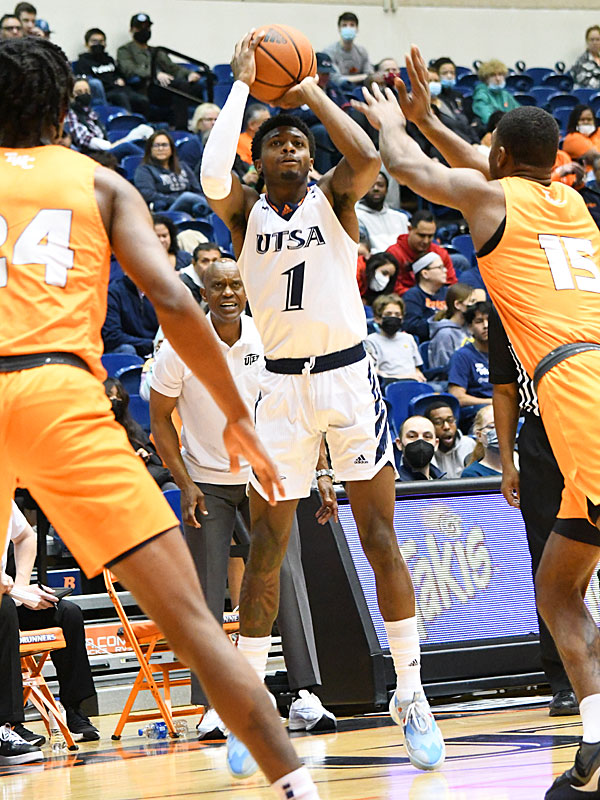 The UTSA Roadrunners lost their sixth straight game Sunday afternoon despite a stirring performance from senior Darius McNeill, who scored 14 of his 20 points in a second-half rally. – Photo by Joe Alexander

For the first three minutes Sunday afternoon at the UTSA Convocation Center, both the home team Roadrunners and the visiting UTEP Miners charged up and down the court, struggling to find their footing.

Locked in a tie game with the Miners, the Roadrunners weren’t gaining much ground, but neither were they losing it. 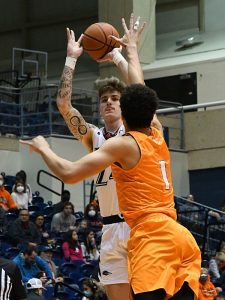 Jacob Germany had a tough day against the Miners with six points on 3 of 12 shooting. The Miners were determined not to let him get going after he produced 21 points and 10 boards Thursday in El Paso. – Photo by Joe Alexander

It was about that time when things started to unravel for the home team. UTSA misfired on 18 of its next 22 shot attempts over the next 14 minutes, allowing UTEP to break away and ultimately claim a 59-54 victory in a defensive struggle.

UTSA shot just 32 percent in the first half and, despite a Darius McNeill-led run late in the game, never could dig itself out of the hole completely. Roadrunners coach Steve Henson acknowledged that 34.5 percent shooting isn’t good enough.

“It’s been the story in too many” games this season, he said. “I mean, our guys really did some good things defensively these last two ball games. Made a lot of adjustments. We changed our defenses, mixed our defenses up.”

In limiting the Miners to 40 percent shooting Sunday afternoon, the Roadrunners also won the rebounding battle, including 14-7 on the offensive glass, and made as many free throws (12) as the visitors attempted.

“But our turnovers early just led to easy buckets for them,” Henson said. “It allowed them to get a little lead on us. There were a lot of other things there that gave us a chance to win. We’re just struggling to get the ball in the hole right now.”

A little more than a third of the way through the conference season, the Roadrunners remain a team in transition, struggling from game to game and week to week for a playing rotation that can win games. 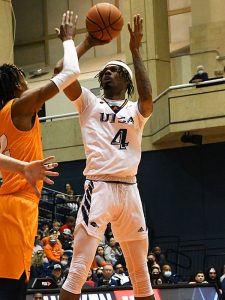 Josh Farmer returned from Covid protocols to score four points in 10 minutes against the Miners.- Photo by Joe Alexander

With all three out for the season, the Roadrunners also have encountered Covid-19 issues dating back to the last two weeks of December. Jordan Ivy-Curry, Josh Farmer and Christian Tucker were the latest victims. They all sat out UTSA’s 69-64 loss at UTEP on Thursday in El Paso.

While Farmer and Tucker returned to play on Sunday, Ivy-Curry, perhaps the team’s best perimeter player, remained out for the fourth straight game.

When the team returns to practice Tuesday, Ivy-Curry is expected to be on the floor in preparation for home games later in the week against Florida International and Florida Atlantic.

“We’ve been fighting different things all year — injuries, Covid,” Henson said. “This week was tough because of the numbers. We didn’t have enough to practice early in the week. (But) guys stepped up and did a great job at El Paso, with eight guys total, six scholarship guys.

“We added two more today (Tucker and Farmer) but those guys practiced yesterday for the first time in a week.

“Everybody (in the country) is dealing with different things. We’ve got a couple of season-ending injuries. We’re short-handed. But we put ourselves in position to win both games, Thursday and today. We just got to find a way to do it.”

Without Ivy-Curry on the floor in El Paso or in San Antonio, the Miners saw quite a bit of McNeill, a transfer who has played at both Cal and at SMU.

McNeill hit 7 of 12 shots from the field and scored 19 in the first game. He followed that effort in the rematch by scoring 20 points on 7 of 15 shooting. McNeill is shooting 44 percent and averaging seven points for the season.

“Good player,” first-year UTEP coach Joe Golding said. “(He’s) obviously talented and has played at some high levels. You can tell he wants to win. You can tell he’s invested, and it means something to him.”

Like the Roadrunners, the Miners have experienced their share of adversity this season. Coming into the series against UTSA, they had lost 26 man-games to injury or illness, including Christian Agnew (six), Keonte Kennedy (five) and Souley Boum (four).

Kennedy didn’t play either game against UTSA, while Agnew played sparingly in both. Boum started and played well in both outings, allowing the Miners to sweep the regular-season series against the Roadrunners for the first time since 2014-15. UTEP is now on a three-game winning streak. 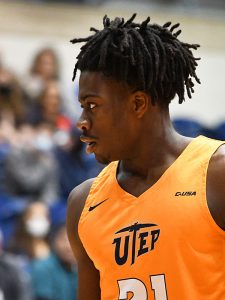 UTEP freshman Ze’Rik Onyema from San Antonio and Jay High School had four points and two rebounds off the bench for UTEP on Sunday. – Photo by Joe Alexander

“We’re finding different ways to win, which is good,” Golding said. “We’re starting to get some consistency in practice. We’ve had this team together really for three or four weeks.
We got Christian back this week. So, yeah, we’re having better practices. We’re starting to understand our roles a little bit better. We’re finding ways to win games.’

“Credit to our guys,” Golding said. “We stuck through it and continued to fight. We’re big believers that tough times pass and tough people last. Adversity makes you stronger. We’ve been tested on that this year … Our guys have stuck together. They deserve this.”