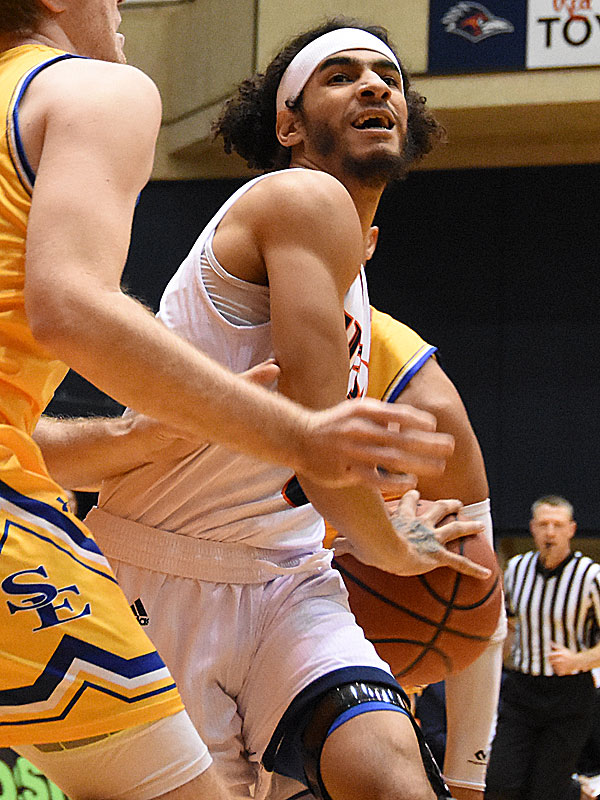 Sophomore Jhivvan Jackson takes it to the basket against Southeastern Oklahoma State. The Puerto Rico native sparked UTSA to its third win in a row. — Photo by Joe Alexander

UTSA guard Jhivvan Jackson poured in a career-high 32 points Saturday afternoon, but, surprisingly, the Roadrunners needed almost every one of them to avoid a second loss this season to a Division II program.

In the end, UTSA rallied in the final minutes to post a 70-67 victory over the Southeastern Oklahoma State Savage Storm.

It was the third win in a row for the Roadrunners, who are 6-2 in their last eight games.

“We all know that in the first half, basically in the whole game, we got whooped,” Jackson said. “They came out and played great on us. I mean, we prepared really great in practice. But it just didn’t translate in the game.”

Jackson finished with career bests in points and also rebounds, with 10, as UTSA played the last game before the Conference USA phase of the schedule commences next week.

The Roadrunners will host the UTEP Miners on Thursday at 7 p.m.

Forward Nick Allen forces an air ball by Southeastern Oklahoma’s Kellen Manek at the buzzer, allowing UTSA to escape with a three-point victory.

The visitors from Durant, Oklahoma, had the Roadrunners on their heels for much of the night, and they led by nine points with 6:42 remaining.

With 2:41 left, the Savage Storm held a 62-57 edge and was on the verge of joining Austin-based St. Edward’s University as Division II teams to win at the UTSA Convocation Center this year.

But in crunch time, the Roadrunners started to click, with Jackson and Keaton Wallace sparking an 11-2 run to take charge in a game they couldn’t afford to lose.

Trailing by the eventual final score, SOSU had the ball on the side with five seconds left, but UTSA stepped up to make a key defensive play, forcing an air ball.

Replay showed that the Storm tried to throw it down to the corner, but Wallace had that angle covered, prompting a pass to Kellen Manek on the left-wing arc.

That’s where UTSA forward Nick Allen showed up to force the miss. Jackson secured the rebound with one hand to end the game.

Guard DJ Henderson curves around around a screen early in the second half to knock down an easy three-point shot for the Savage Storm.

SOSU hit five 3-pointers in the first half and cruised to a 35-34 lead at intermission. For the game, the Savage Storm knocked down nine treys, including three by guard Jett Jobe and two by Manek.

As it turned out, UTSA made just enough plays to win, holding the visitors to 40.6 percent shooting from the field.

UTSA showed up on Saturday night rated 177th out of 353 Division I programs in the nation on Ken Pomeroy’s computer. The Roadrunners are 3-6 against teams in Division I and 3-1 against sub-D-I.

Three of their D-I losses have come against teams rated in Pomeroy’s top 70, including Oklahoma (26), Arkansas (58) and South Dakota State (69).

With the win over SOSU, the Roadrunners improved to 2-7 after trailing at the half this season. In two plus seasons under Coach Steve Henson, they are 8-33 in those situations.

During the 6-2 streak, UTSA hasn’t allowed an opponent to shoot better than 42.4 percent. Here’s the breakdown:

North Texas won on the road at Rice Saturday afternoon, claiming a 103-87 victory, in the C-USA opener for both teams. Also, Louisiana Tech won at home, downing Southern Miss, 71-56. 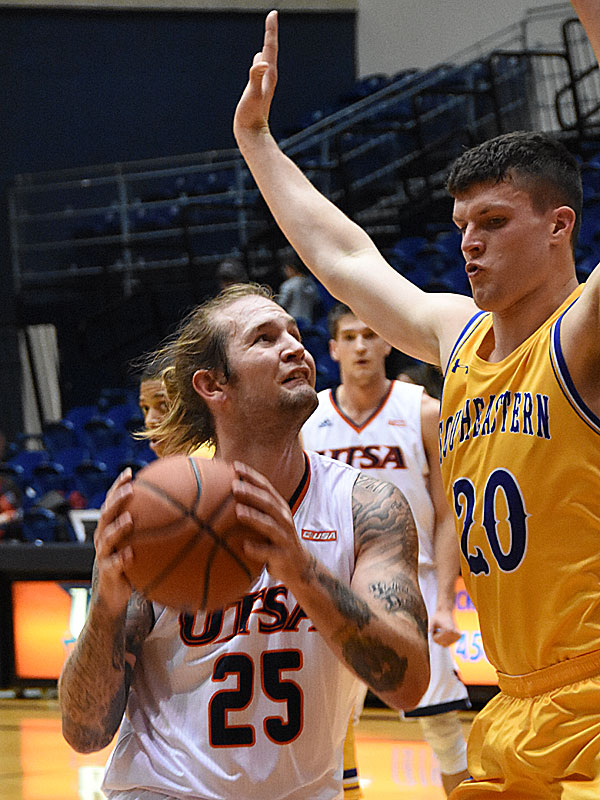