Playing on the road in a traditionally hostile setting, the upstart Texas State Bobcats opened with a 19-6 burst Saturday afternoon against a higher-profile opponent that didn’t seem all that interested in competing. 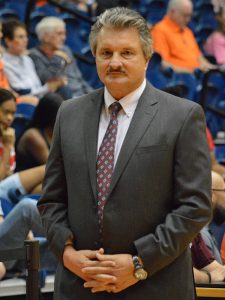 But then the Arkansas Razorbacks woke up and found a rhythm, answering with a 17-0 run over a four-minute stretch that spelled the difference in a 73-70 victory, putting an end to the Bobcats’ eight-game winning streak.

“We started off strong, and Arkansas picked it up,” Texas State coach Danny Kaspar told reporters. “They counter-punched us and knocked us down, and we were a little slow to get up. I guess it went from 19-6 (in favor of Texas State) to 21-19, something like that.

“Other than that stretch right there, I thought we played pretty good.”

Kaspar’s comments were posted in a video published online at wholehogsports.com.

After a Christmas break, Texas State will continue its non-conference slate on Dec. 29 at home against Howard Payne. It’s the final test for the Bobcats before they open play in the Sun Belt on Jan. 3 at home against Georgia Southern.

Based on what has happened in the first few months of the season, the Bobcats should feel pretty good about their chances in conference.

In Nijal Pearson, Tre Nottingham, Jaylen Shead, Alex Peacock and Eric Terry, they’ve got a leadership nucleus that has played well together for most of the season.

Kaspar lamented 13 of 41 shooting combined by Pearson, Nottingham and Peacock.

“We got to have our main people shoot better than that,” Kaspar said. “But, I thought our defense was reasonably good, against a team in a pretty hostile environment, like this place is.”

“But then I thought Mason Jones was the one player that made a difference in the game today. He really had a good game. He was very efficient against us. He hurt us even more than Gafford.

“But we’ll take from this and learn from it and try to do better.”

“Shows me we were battling pretty good,” he said.

Texas State is 10-2 to lead all teams in the Sun Belt in non-conference victories.

Shead, the team’s starting point guard, is tied for second in assists (4.9) and leads in assist-turnover ratio (2.7-1).