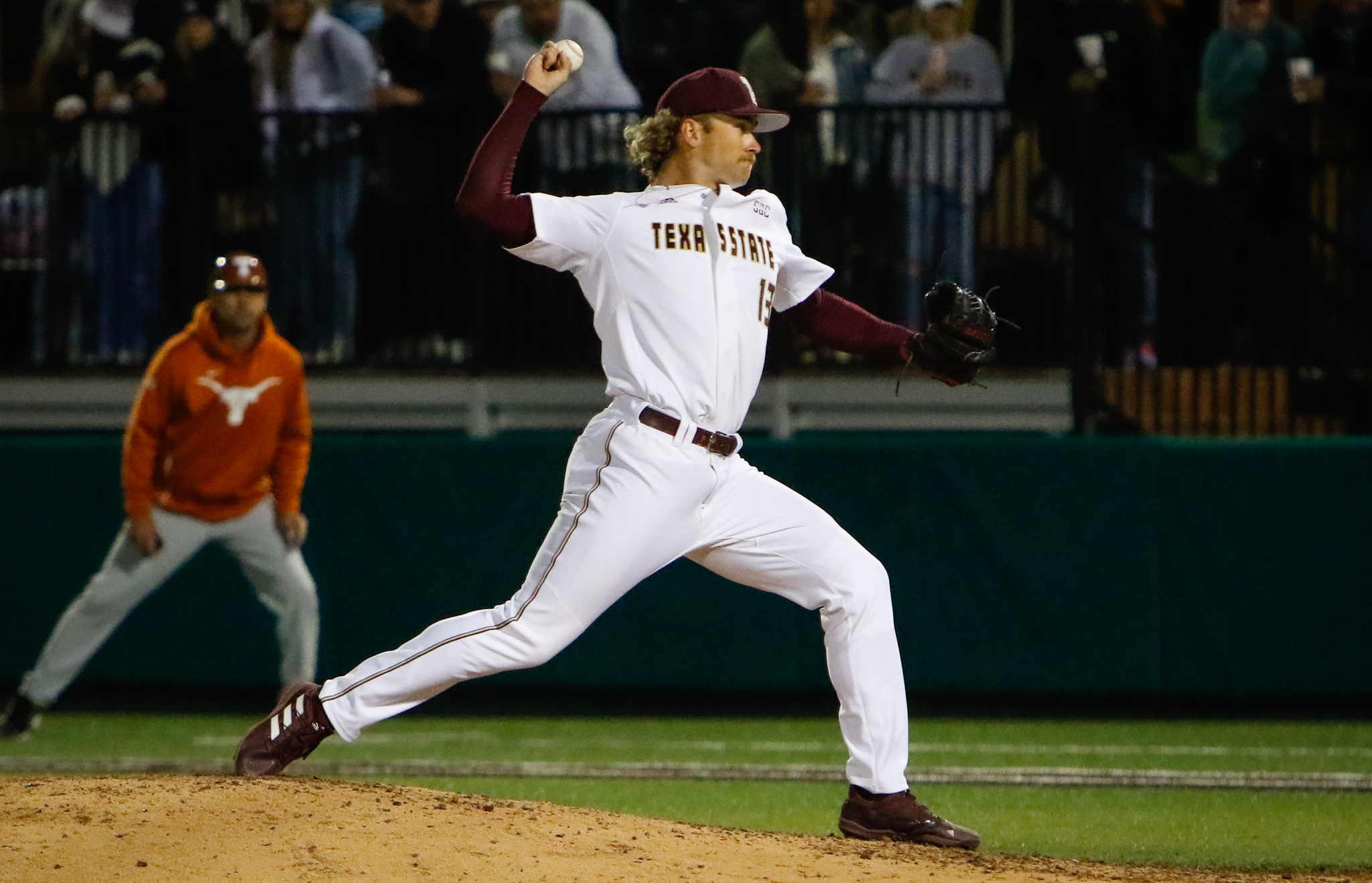 Texas State closer Tristan Stivors has struck out 23 while walking only one in 13 innings this season. He fanned three and earned the save in the Bobcats’ 6-4 victory Wednesday over the top-ranked Texas Longhorns. — Photo by Jill Slaughter, courtesy of Texas State athletics

SAN MARCOS — Fourteen games into his senior season with the Texas State Bobcats, 6-foot-4 righthander Tristan Stivors has developed into one of the unquestioned leaders on the team’s pitching staff.

If a game is on the line late, everyone knows who is getting the ball.

It’s Stivors, who throws breaking pitches so nasty that hitters’ knees sometimes buckle as the ball darts into the strike zone. For some, swinging at shadows might produce more success.

In eight appearances with the Bobcats this spring, Stivors has struck out 23 and walked only one in 13 innings.

One of the saves came in the biggest of moments Wednesday night when the 17th-ranked Bobcats upset the top-ranked Texas Longhorns, 6-4, in Austin.

With runners at first and second base, Stivors pitched out of trouble in the ninth inning when he struck out UT star Ivan Melendez to end the game. Melendez was frozen on a breaking pitch that bit hard and caught the inside corner.

When the home plate umpire called strike three, a packed house of nearly 7,500 fell mostly silent except for a vocal group of Bobcats fans who cheered wildly.

“It was definitely a once-in-a-lifetime experience,” Stivors said Thursday afternoon before practice. “It’s something that I will never forget.”

With the win, the Bobcats improved to 11-3 on the season, including a 6-2 record against power conference programs and 1-1 against the Longhorns.

This weekend, Texas State hosts three games with the Southern University Jaguars, starting with the series opener at 3 p.m. Friday. Single games are also set for Saturday and Sunday.

Next week, the Bobcats will host the Prairie View A&M Panthers on Tuesday night, and next weekend, the team’s Sun Belt Conference schedule commences in a three-game road series at Arkansas State.

The conference season looks promising for the Bobcats right now, given that they have won three games at home against the Ohio State Buckeyes, two of three on the road at Arizona and now have split two against UT.

Texas won in San Marcos, 9-8, on Tuesday night to spoil a night in which a Texas State-record crowd of 3,283 attended. The Bobcats returned the favor 24 hours later in Austin at UFCU Disch-Falk Field even after falling behind by three runs early.

Trailing 3-0, Texas State found a spark when John Wuthrich hit a three-run home run in the third inning to tie the score. The Bobcats scored two more before the inning was over on miscues between the UT pitcher and catcher.

In the fourth, Isaiah Ortega-Jones belted a solo home run, lifting Texas State into a 6-3 lead. Texas, in response, added one run in the fifth to make it 6-4. But, remarkably, a Texas State team that lost 36 games last year held the lead to the end.

Crazier still, Bobcats’ pitching notched strikeouts for the last six outs, including three by Levi Wells in the eighth and three more by Stivors in the ninth.

Stivors, who was warming in the bullpen in the eighth, heard all the groans from Longhorns’ fans as Wells fanned three in a row.

“Another time I noticed it was really loud was when I was stepping on that mound,” Stivors said. “I actually looked around and I saw how many people were (in the ball park), and I just took it all in. I made sure just to stay in the present moment.”

On Tuesday, Stivors had pitched the top of the ninth inning in the UT series opener. That night, his mission was to keep the game close. He succeeded, blanking the Longhorns while striking out two.

But the Bobcats, trailing by one, eventually lost in agonizing fashion. In their last at bat, they left the potential tying run at third. On Wednesday, it was the Longhorns who came up empty in the ninth, courtesy of Stivors and his newfound swagger after a so-so 2021 season.

“He’s been really good and really lights out for us,” Texas State coach Steve Trout said. “And, I think more importantly, he’s just rolling right now with some confidence. He knows he’s got the stuff to get anybody out, and he wants the ball in that moment.”

This year, by contrast, his command is much better. Particularly, his command on his fastball. Stivors throws it with “tilt” and keeps it low and away to righthanders. By doing so, he sets up his breaking pitches, including both a slider and a curve.

Trout said the curve is definitely the “dirtiest” pitch in Stivors’ arsenal.

“That’s his most confident pitch,” the coach said. “He threw a really good one (on a 3-2 count against Melendez) and won the game for us. What a clutch pitch, and, you know, he was battling with everything. The fans. The energy (in the stadium). Everything. Everything that was going on.

“That just shows you his mental toughness, to be able to execute that pitch in that moment.”

It also shows you why Stivors has earned the dual roles of both closer and leader for a team on the rise.