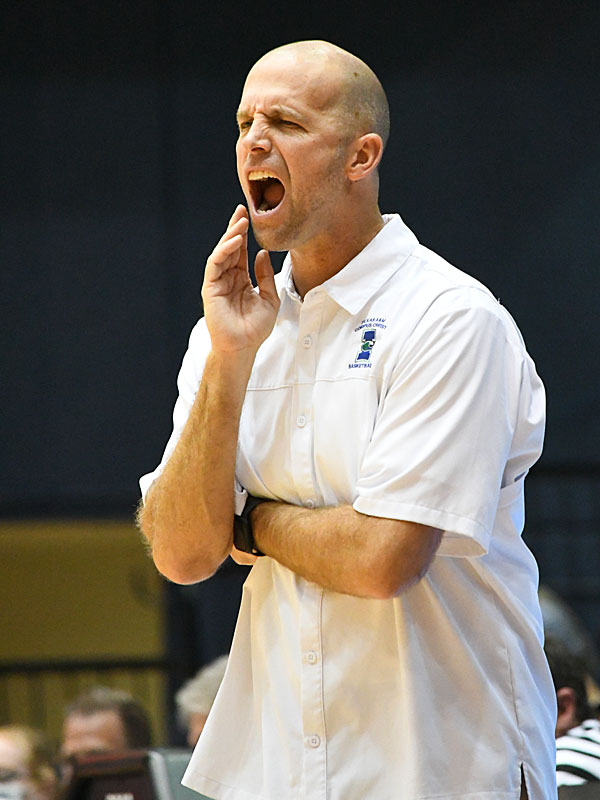 One coach and several players from the San Antonio area are vying this weekend for a chance to advance to the NCAA men’s basketball tournament.

In addition, as many as 10 teams from the state of Texas could make the 68-team field, which is set to be unveiled on Sunday night.

Lutz is a first-year head coach at Texas A&M-Corpus Christi and has led the Islanders into the Southland Conference tournament final.

The Islanders will play for the SLC’s championship and NCAA automatic bid Saturday night when they take on the Southeastern Louisiana Lions. Tipoff is set for 8:30 p.m. at the Merrell Center in Katy.

If Lutz’s team wins, it means that one of his players, guard Jalen Jackson from Wagner High School, also would be guaranteed of making a trip to the NCAA’s Big Dance.

The fourth-seeded Islanders took a big step toward their dream Friday when they knocked off the No. 1 seed Nicholls State Colonels. Nicholls had won three games against A&M-Corpus Christi this season.

The NCAA tournament starts next week with four opening-round games, followed by rounds of 64 and 32 on the weekend.

On the second weekend, the tournament will be held at four sites, including San Antonio’s AT&T Center, which is hosting the South Regional. The Final Four is scheduled April 2 and 4 at the Caesars Superdome in New Orleans.

Several San Antonio area players could get a shot to play in the tournament, including Texas Tech guard Kevin McCullar, Jr. from Wagner and Arkansas guard Stanley Umude from Warren.

Both have played roles as starters this season, though McCullar has been coming off the bench lately as he makes his way back from an injury.

On Saturday, the Red Raiders are playing the Kansas Jayhawks for the Big 12 title, while Umude and the Razorbacks played in a Southeastern Conference semifinal against the Texas A&M Aggies.

Texas Tech and Arkansas are both expected to make the NCAA tournament no matter what.

A&M is on the bubble but appears to be in good shape after a victory Friday over fourth-ranked Auburn and another victory Saturday over 15th-ranked Arkansas.

In addition, Brendan Wenzel from O’Connor is another player to watch from the San Antonio area.

He has been a starter this season for the Wyoming Cowboys, who have been projected as an at-large selection despite getting bounced out of the Mountain West tournament.

Texas-based schools in the hunt

The state of Texas, meanwhile, could produce as many as nine or 10 teams in the NCAA tournament. From the Big 12, the NCAA field is expected to include Texas Tech, Baylor, Texas and TCU.

From the Southeastern Conference, Texas A&M remains strongly in the hunt.

From the American Athletic Conference, the Coach Kelvin Sampson’s University of Houston Cougars are expected to make the field, and the SMU Mustangs remain in contention.

Both are playing in conference semifinals Saturday in Fort Worth. Houston plays Tulane at 2 p.m. and SMU takes on Memphis at 4 p.m.

Southwestern Athletic Conference — Texas Southern is in position to get the automatic bid Saturday afternoon, with the Tigers playing the Alcorn State Braves. The conference tournament title game is set for 5 p.m. in Birmingham, Ala.

Western Athletic Conference — Abilene Christian will attempt to qualify for the NCAA field for the second straight season. The Wildcats will play the New Mexico State Aggies for the WAC title and auto bid. The game is set for Saturday at 9 p.m. in Las Vegas.