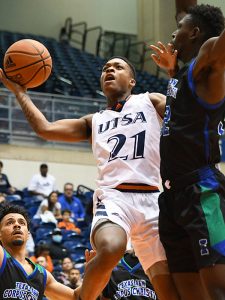 Starting guard Jordan Ivy-Curry and backup forward Aleu Aleu, a promising newcomer, have landed in COVID-19 protocols and are not expected to play for the UTSA Roadrunners when they host the UT Rio Grande Valley Vaqueros Friday night.

UTSA coach Steve Henson didn’t say whether either one had tested positive, only that they were in protocols. But he did say that neither is feeling symptoms. He said he isn’t certain how long the two will be unavailable.

“We got all this news late last night, very late last night,” Henson said following a Thursday afternoon practice. “Don’t know all the details. But, certainly (neither will play) tomorrow.”

Neither attended the team’s practice.

Even though the Roadrunners have won three of four and five of their last seven, they have done so in spite of a stretch of adversity covering most of the past three weeks.

Guard Darius McNeill went down on Nov. 24 with a foot injury and has been out for three straight games nursing a case of plantar fasciitis in his right foot.

Forward Cedrick Alley Jr., one of the team’s hottest shooters of late, battled an illness that caused him to miss most of the team’s practices this week.

Both worked out Thursday and appear to be ready to go for the game against the Vaqueros.

At the same time, the loss of Ivy-Curry and Aleu is troublesome, given that the Roadrunners play three games in the next six days.

“It is what it is,” Henson said. “Juice is obviously a key guy. The role he’s played the last few games, getting almost all the minutes at the point guard spot, I liked the progress he was making in that regard. He was feeling pretty good. I liked what he was doing.”

Ivy-Curry, a sophomore from Houston, has emerged as the team’s second leading scorer. He is averaging 14.1 points, 2.8 rebounds and 2.6 assists in 10 games. 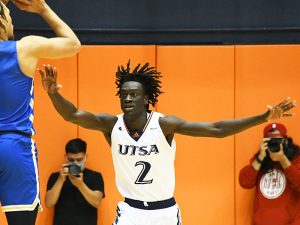 Aleu Aleu (above) played 22 minutes on Saturday in Houston and had come on strong in recent practices. – File photo by Joe Alexander

Slowed by injuries to start the season, Aleu, a 6-foot-8 native of Africa, has played in only four games, the last four, averaging 10 minutes as he worked his way back.

Last Saturday, he played a season-high 22 minutes in Houston against Sam Houston State, hit his first three-pointer and contributed with an all-around game.

The former Austin High School and Temple College standout had started to come on strong for UTSA in recent practices, as well, showing off a sweet stroke on three-point shots.

“We were going to try to expand his role rather significantly,” Henson said.

The Roadrunners are scheduled to travel on Monday and then play on Tuesday afternoon at Illinois State in Normal, Ill. On Wednesday night, they’re scheduled to play at home against San Antonio-based Our Lady of the Lake University.

After a break for Christmas, they open Conference USA competition on the road the following week. The Roadrunners will play at Middle Tennessee State on Dec. 30 and at UAB on Jan. 1.

“If we just stick to how coach wants to play, moving the ball around, playing hard on defense, (we’ll be OK),” he said. “You’ve seen us. Everyone’s touching the ball, everybody’s just flowing … We’re playing like a team — like a winning team.”

McNeill says he’s feeling much better after the bout with the plantar fasciitis, his second such bout in two seasons. He said the injury knocked him out of the lineup for “four or five” games last season at SMU.

McNeill returned to workouts on Monday and did a little more on Tuesday. He said his workout on Wednesday was his first “going up and down” in a game-like situation this week.

“When I was scoring and (doing) certain things off my foot, it felt good,” he said. “I was just playing with a clear mind. Mentally, I’m in a very good space.”