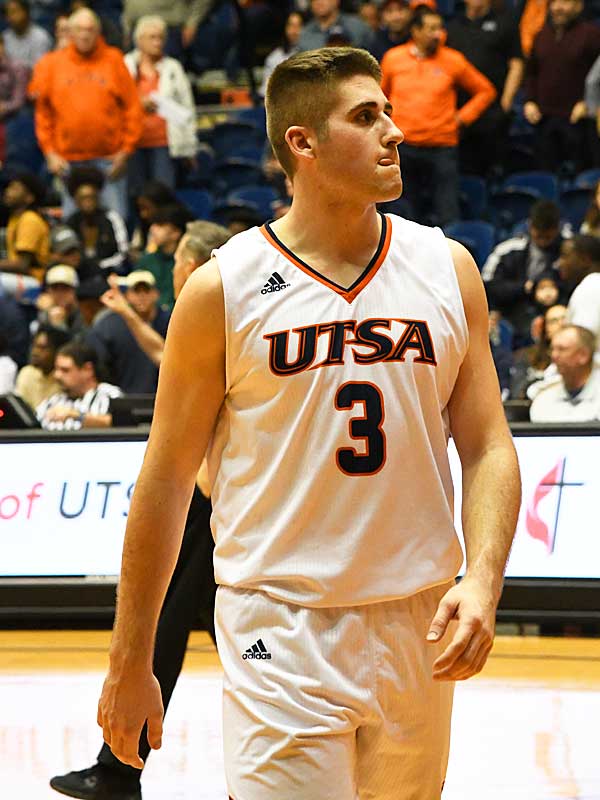 Byron Frohnen moved past Jeromie Hill to become UTSA’s career rebounding leader on a night, ironically, when the Roadrunners got out-rebounded 46-24. – Photo by Joe Alexander

The Blazers pulled down 14 offensive rebounds and outscored the Roadrunners 38-22 in the paint and 15-2 in second-chance points.

Tavin Lovan produced 19 points and six rebounds for the Blazers. Wil Butler, playing out of the low post, hit 8 of 10 from the field and added 18 points.

Guards Keaton Wallace scored 26 and Jhivvan Jackson 20 for the Roadrunners, who entered the game with a 4-0 record at home in conference.

Jackson, the nation’s second-leading scorer, hit 6 of 16 from the floor. He was 2 of 9 in the second half.

Frohnen, a senior from Las Vegas, had four points, four rebounds and two assists. The effort gave him 845 rebounds for his career, which moved him past Jeromie Hill and into the No. 1 spot in the school’s record books. He also rose to No. 2 in career starts with 122.

With the loss, the Roadrunners fell to 8-2 at home in the Convocation Center. They had won seven straight at home. Their last loss at the Bird Cage came on Nov. 30 against the Prairie View A&M Panthers (79-72).