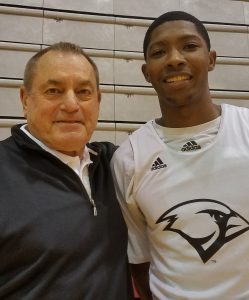 By Jerry Briggs
For thejbreplay.com

The long wait is finally over for Coach Ken Burmeister and the Incarnate Word Cardinals.

After a four-year transition, the Cardinals will open a season fully eligible for the Southland Conference and NCAA Division I postseason tournaments.

UIW tips off at home Friday night with a non-conference game against the Southwestern University Pirates.

“We’re real excited to get a game,” Burmeister said. “It’s been a long summer, a long fall, and now we’re ready to go. The guys are very anxious to play a game, to get an opportunity to play somebody else. You get to experience where you are with your offenses, defenses and so on and so forth.”

Previously an NCAA Division II program, UIW accepted an invitation in 2012 to make the move to the SLC and Division I.

As a result, in each of the past four years, the Cardinals were ineligible even to play in the conference tournament once the regular season ended.

It was particularly frustrating time for the Cardinals, because they posted winning records during the first three seasons and defeated a few quality programs along the way.

But as the new season dawns, the Cardinals are noticeably more athletic.

In addition, the veteran core has been bolstered with the addition of highly-touted freshman guard Keaton Hervey and forward Charles Brown III.

Senior guard Sam Burmeister, the coach’s son, said his father is excited about getting past the transition period.

“He’s very amped up,” the UIW guard said. “This is something we’ve been looking forward to for four years now. It feels good that we’re finally able to play in the postseason. I feel a lot more excitement in the preseason than I have in the past years.

“With our talent this year I think we have a chance to play deep in March.”

Eight teams will qualify for the SLC tournament in Katy. UIW’s coach said it will be a challenge just to get there.

“You got to play well,” Ken Burmeister said. “You can’t turn the switch on and off … It’s one of the top conferences in the country. The last place team thinks they can win it.”

Notes: The Cardinals’ season-opening homestand continues against Trinity next Monday and against McMurry next Friday.

The first three games count on the record for UIW but are exhibitions for the opponents.

Starters are expected to be Hart, Hervey and Johnson in the backcourt, with Brown and either Socks or Christian Peevy at forward.

First players off the bench are expected to be Sam Burmeister, Jorden Kite and newcomer Augustine Ene.