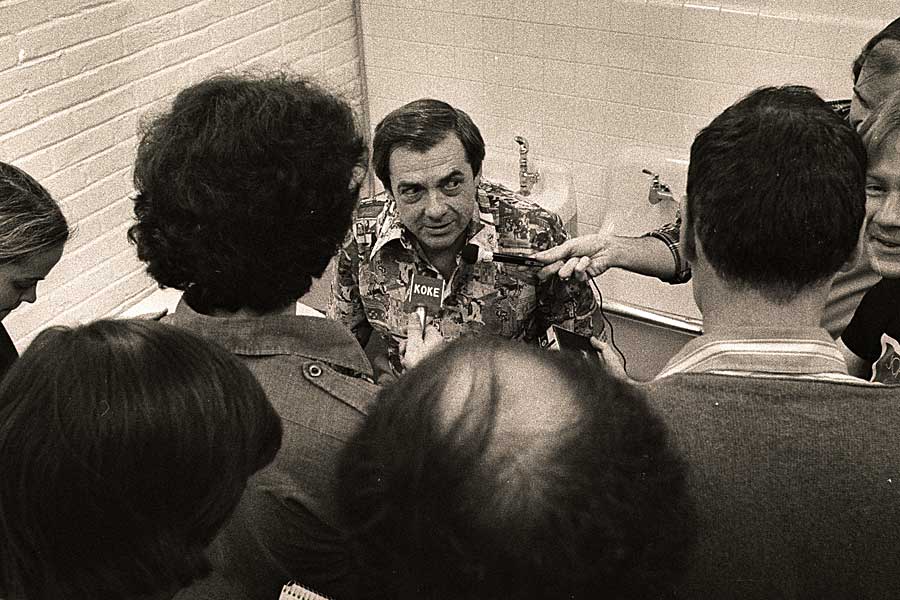 By Jerry Briggs
For thejbreplay.com

More than 40 years ago, a wise-cracking coach who presided over one of the minor sports at the University of Texas started teaching us all that life didn’t necessarily end after the bowl games.

As a University of Texas senior studying journalism, I learned that perhaps the best post-game quotes in college basketball history could be yours if you could just find the coach’s tiny office in the bowels of Gregory Gym.

Lemons was always in a pretty good mood with us, even though his team was decidedly mediocre in his first season in Austin. I think the Horns finished 13-13 that season, or some such.

Nevertheless, Abe seemed to be genuinely appreciative of the attention he’d get from the media in general and from student reporters, in particular.

Could he deliver the one-liners? Oh, my gracious. He was an aspiring scribe’s dream.

Reflecting on his days as coach at Pan American University in Edinburg – now, UT Rio Grande Valley – Lemons would say he’d warn his players about straying too far from campus lest they be carried off by the coyotes.

As he looked over the stat sheet after UT games, the coach would chew an ever-present cigar down to a nub. Then he’d let fly with zingers, sparing no one.

A UT power forward coming off a modest performance would be hailed by Lemons for producing “one more rebound than a dead man.”

So, with a nod to Lemons’ humor, irreverence and genuine enthusiasm for the game, I want to welcome you to another college basketball season.

Also, welcome to my new website, which we will call, The JB Replay. You can find it by typing in www.thejbreplay.com.

I’m not entirely sure where I’m going with this project.

But with a unique year in basketball dawning in the Alamo City, I think it’s the obvious choice as website’s primary focus for the next several months.

I’m not talking about Spurs/NBA coverage. You can get your Spurs coverage anywhere, most notably from my erstwhile former employers at the San Antonio Express-News.

Dial up The JB Replay, and you can expect to get an expanded look at the game from the grassroots level, to the colleges.

Why prep and college basketball?

Well, for the first time, San Antonio will host both the UIL state tournaments and the NCAA Men’s Final Four in the same year.

The state girls and boys tournaments will be held in the first few weeks of March, followed by the Final Four from March 31-April 2, both at the refurbished Alamodome.

In addition, San Antonio for the first time will have two universities eligible to qualify for the NCAA Division I men’s and women’s tournaments.

So (and excuse me for carrying on a conversation with myself) maybe that’s the initial goal for this news site … devote a day or two per week in the spring to reporting on the high schools and then split the rest of it between the local and major colleges.

Before long, it will be football season again.

Then, maybe we can do the basketball thing all over again in 2019, just in case fans need a reminder on the worldview of Lemons, an Oklahoma native who won 599 games in his college basketball career.

At Texas, Lemons led the Longhorns to the 1978 NIT championship and raised the possibility that basketball could indeed spark interest in a football state.

Without knowing it, he also opened a young journalist’s eyes to the potential for a pretty cool life-long pursuit.

Suffering from Parkinson’s, the coach died in 2002 at age 79. Even basketball referees, a frequent target of his verbal barbs, smiled at the memories.

“You can say something to popes, kings and presidents, but you can’t talk to officials,” Lemons once complained. “In the next war, they ought to just give everyone a whistle.”