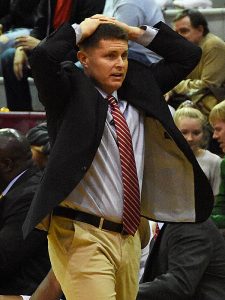 The University of the Incarnate Word announced Tuesday that it will upgrade the Alice P. McDermott Convocation Center with the installation of a new floor, thanks to a partnership with CHRISTUS Santa Rosa Hospital System.

To honor the generosity of the donor, the basketball/volleyball court will carry the organization’s namesake (CHRISTUS Court), with branding on the surface, according to a news release from the UIW athletics department.

The project will include installation of a 12,000 square-foot floor with better grade maple and will include a new subfloor system. The new court will also have an enhanced design for a more aesthetically pleasing look.

Installation is scheduled for completion in the summer of 2019, according to the release.

“For a student-athlete’s body, the benefits of a state-of-the-art floor, one with excellent resilience, cushioning and durability, are plentiful and long lasting,” Cunningham said.

The cost of the project wasn’t made public due to a confidentiality agreement between the private entities, a spokesman said. But the release said it was the fourth-largest donation in UIW athletics history.

UIW athletics teams compete in NCAA Division I as a member of the Southland Conference.