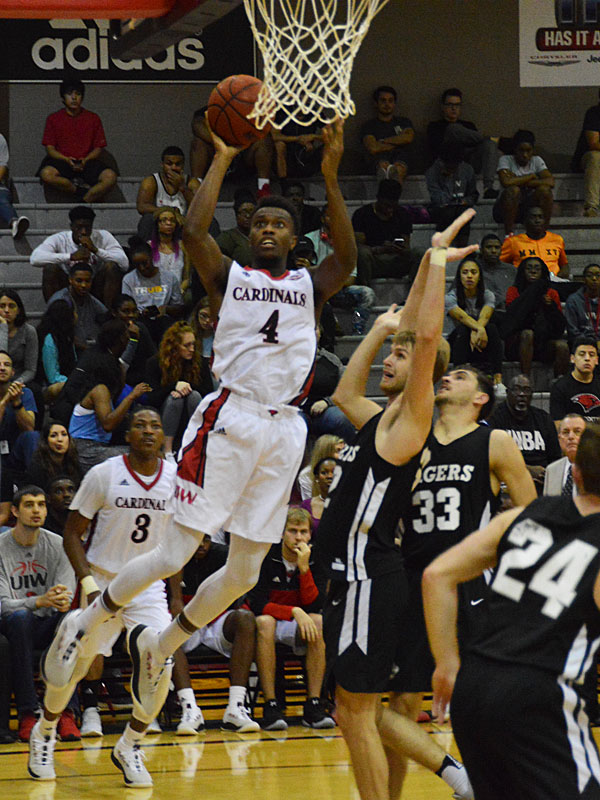 Incarnate Word redshirt freshman Christian Peevy grew up on the south side of Chicago and learned to play basketball on a court known as “The Gutter.”

Peevy talked about the experience Monday night after his 16 points and 10 rebounds off the bench helped the Cardinals blow out the Trinity Tigers, 93-57.

“We played in this place called The Gutter, because the rims were, well, (there was) no net and barely a backboard,” he said. “I used to stay out there from eight in the morning until six. I used to be there all day.”

In between the time his mother dropped him off and picked him up after work, Peevy learned to fend for himself.

“Basically, it just made me who I am,” he said.

Peevy said his friends didn’t call many fouls on each other.

“No fouls,” he said. “You complain for a foul, and that’s a big problem. You get hit in the mouth, you got to get up and keep playing. That makes you tough. Makes you play through tough defense.”

Peevy’s toughness has been on display for the Cardinals in their first two games.
Knocked out of the lineup all of last year with a stress fracture in his right tibia, the 6-foot-6 forward has returned with a vengeance.

In two games, he has produced a 25 points and 14 rebounds in a combined 28 minutes.

“Christian had a dunk against Texas (in last year’s opener) and hurt himself,” UIW coach Ken Burmeister said. “He played a little against Loyola. Then he couldn’t go any more because of his injury.

“He’s made great progress. He’s a hungry young man. He puts a lot of time in the gym, getting in the weight room. Just getting better all the time.”

Injured, not playing and trying to make it all work in a city a long way from home, Peevy said it was “extremely hard” to cope with it.

“I love playing basketball,” he said. “It was hard watching my teammates play and I couldn’t. I really wanted to be out there. To show (the state of) Texas what I had to offer. I guess I’m getting a chance this year.”

But the story of the game centered on Peevy and the reserves. Together, Peevy, senior Sam Burmeister and freshman Augustine Ene all reached double figures and combined for 39 points.

In the last four minutes of the first half, the bench players sparked a 16-2 run that expanded a six-point lead to 44-24 at intermission.

When Trinity pulled within 14 early in the second half, Peevy led a 29-8 spree that pushed the margin to 78-43. During that stretch, he scored 10, including a fast break dunk and a put-back off an offensive rebound.