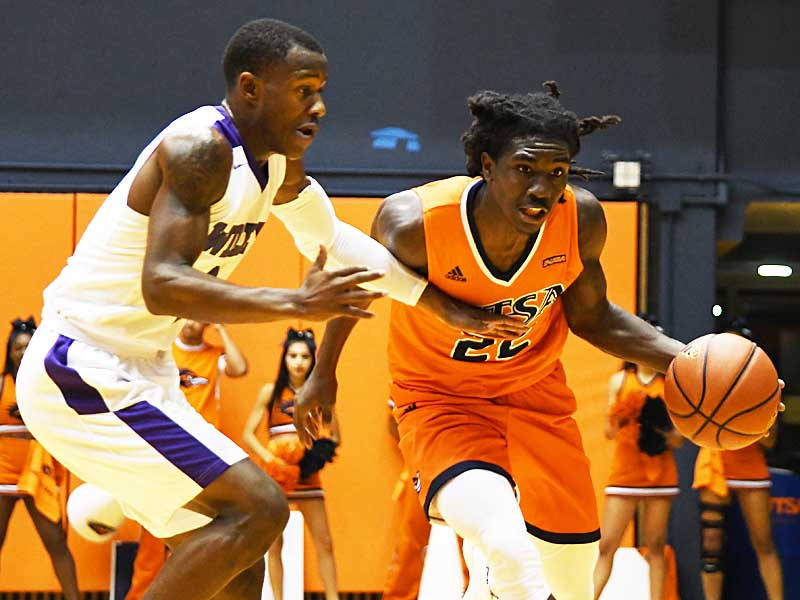 Last season, if you hit a jump shot from 20 feet, 9 inches in an NCAA Division I college basketball game, court side wags would dutifully write down a “three” next to your name on the score sheet.

Your effort would be cheered by the fans and hailed by the public address announcer, who’d croon your name along with two additional words, “for threeeeeee!”

This season, a jumper from 20-9 just isn’t the same. It counts the same as a layup. It’s only a two.

To earn three points for your team this season, you must hit the jumper from an arc measured at 22-1 and 3/4 inches.

Division I programs have been practicing with the new distance since the middle of the summer, but it’s still an adjustment for everyone, including the UTSA Roadrunners, as the calendar turns to the last day of November.

But even with the decline in efficiency, UTSA isn’t changing anything in regard to its overall offensive philosophy.

Last Friday, the Roadrunners hoisted 31 threes and knocked down 11 of them in their home opener against Wiley College.

Over the last eight minutes of the game, they took seven and made four from long distance and buried the Wildcats 90-68 for their first victory of the season.

Tonight, UTSA hosts Prairie View A&M, and fans are certain to see much of the same.

The Roadrunners will continue to play what is called “inside-out” basketball, hoping to collapse the defense and then pass out to the open man.

If the open man is standing behind the arc, he’s expected to take it and make it.

Earlier in the season, with UTSA playing its first five games away from home, the perimeter shooting in general was poor for a number of reasons.

But UTSA guard Keaton Wallace said earlier this week that the additional 16 and 3/4 inches on the three-point arc wasn’t a good thing initially for a team that was also trying to figure out its point guard situation.

“I think it affected us a little bit, since we are stretched out on the floor a little bit more,” Wallace said. “I feel like, sooner or later, we’re going to start using it to our advantage.

“We do have guys on our team that can shoot the ball. I feel like it’s going to stretch out the defense a little bit more.

“Once we start putting things together, start jelling a little bit more, I think it’ll be an advantage to us and not a disadvantage.”

Wallace said UTSA players worked hard over the summer in an attempt to adjust to the new court dimensions.

“I feel everyone was locked in and trying to get their shot adjusted,” he said. “Some guys have that shot, you know, muscle memory. When they shoot it, they know it’s going in. It’s just second nature.

“Guys had to make slight adjustments. You know, jump higher. Flick (the wrist) a little harder. We worked on it pretty well.”

UTSA made one major personnel adjustment after the 0-5 start.

In an effort to get a better flow on the offense, the Roadrunners moved freshman Erik Czumbel into the starting lineup at point guard and sent Wallace back out to the wing.

Wallace continued to struggle a bit with his shot against Wiley, hitting only 5 of 14 shots, including 2 of 7 from three.

But the feeling is that Wallace, who is shooting 29.7 percent from the field and 26.5 from three, will come around eventually.

There’s also a feeling that other shooters also will flourish once they get a few home games under their belt.

UTSA coach Steve Henson isn’t so much concerned about the new three-point arc as he is about the execution of the offense. He just wants to see his players take better shots.