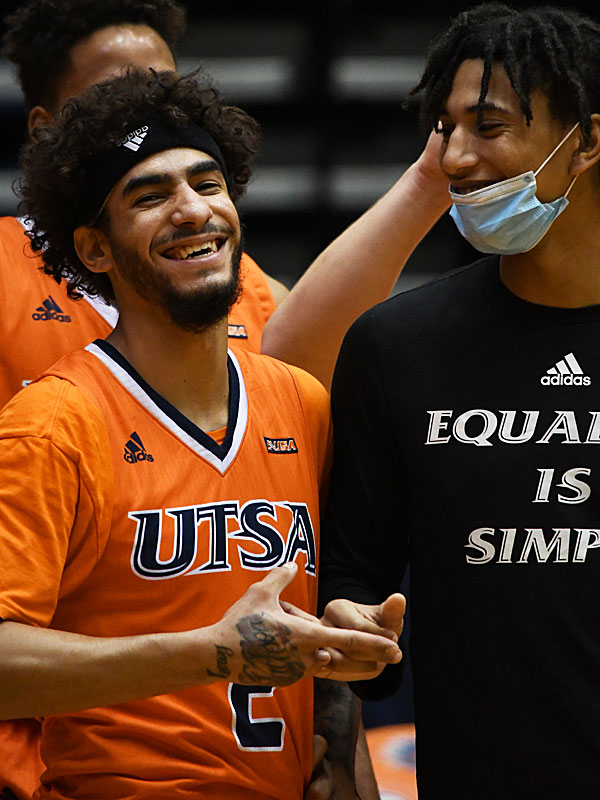 Another bout with the basketball blues loomed for the UTSA Roadrunners.

One more week with a bad feeling in the pit of the stomach, followed by grinding practices and lingering questions about the viability of the ball club.

Trailing by one point at home against the North Texas Mean Green with 3:38 remaining, the Roadrunners were on the brink of getting swept in a two-game series for the second week in a row.

It didn’t happen. In perhaps a pivotal moment in their season, they deployed a small lineup, executed well on both ends of the floor and claimed a 77-69 victory Saturday over the Mean Green for their first win in Conference USA. 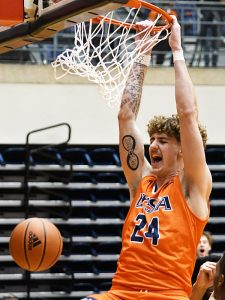 UTSA center Jacob Germany throws down a dunk with 2:18 left to give UTSA a 69-65 lead. – Photo by Joe Alexander

“It was great,” UTSA guard Keaton Wallace said. “We had guys making good plays. We were knocking down shots and getting stops. All the way down to the end.

“Those are the type of games that feel good, that you worked really hard for. That was a good victory right there.”

Guard Jhivvan Jackson led the way with 31 points, including 26 in the second half. He also had six rebounds. Center Jacob Germany scored 16 and Wallace 14. Javion Hamlet had 18 for the Mean Green, but he was held in check with 5 of 14 shooting. As a team, the Mean Green hit only 38 percent, well below their season average of 49.5.

Despite an erratic summer caused by the Covid-19 pandemic, UTSA entered the season feeling good about its chances. But ever since games got underway in the last week of November, it’s been a bumpy ride. The team endured a couple of ugly losses at UT Rio Grande Valley and Oklahoma, and then rebounded with two straight victories leading into the C-USA phase of the schedule.

Last week in Houston against the Rice Owls, the Roadrunners gave up a combined 179 points and lost twice.

Returning home, they played better on the defensive end Friday night but watched at the end of the game as the Mean Green pulled out a 77-70 victory. With the decision, UTSA dropped to 0-3 in conference for the first time in the Steve Henson coaching era. 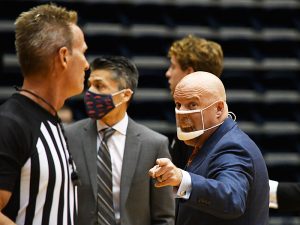 UTSA coach Steve Henson talks to an official after a foul called on the Roadrunners in the final minutes. Henson went with a four-guard lineup down the stretch. – Photo by Joe Alexander

Moreover, the Roadrunners didn’t have much time to adjust for Game 2 against the defending C-USA champions. They were back on the court early Saturday morning for a shootaround and then reported to the arena a few hours later for a 3 p.m. start. None of it mattered.

Trailing by three at intermission, UTSA outscored North Texas 46-35 in the second half, including 15-6 in the final three minutes, to make something of a statement. So, instead of traveling winless in conference to Louisiana Tech next week, the Roadrunners (5-6, 1-3) they will travel with some confidence.

“It’s really big,” Henson said. “In this context, it feels like it’s more than one game, simply because of the nature of it. You go on the road, lose two to Rice. Looking ahead, you see North Texas on the schedule. Then you see LA Tech on the schedule. It was pretty important. You know, LA Tech’s loaded. We understand that.

“It was very, very important (to win today). It reinforced what we’ve been telling them. We think we’re making progress.” 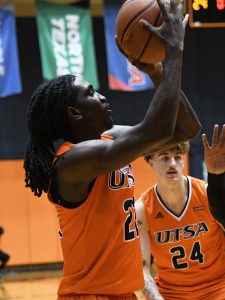 Henson paused to consider the statistics sheet, particularly the second-half numbers. He liked what he saw.

With the teams trading runs for most of the second half, North Texas got into foul trouble, sat down big man Zachary Simmons and went with a smaller lineup. Henson answered by going small himself, using Jhivvan Jackson, Erik Czumbel, Jordan Ivy-Curry and Wallace, along with either Phoenix Ford or Jacob Germany.

The Roadrunners clicked. In the final three minutes, Ivy-Curry found Germany rolling to the rim and lobbed it up high for a dunk. Wallace hit a couple of threes. Jackson knocked down three of four free throws.