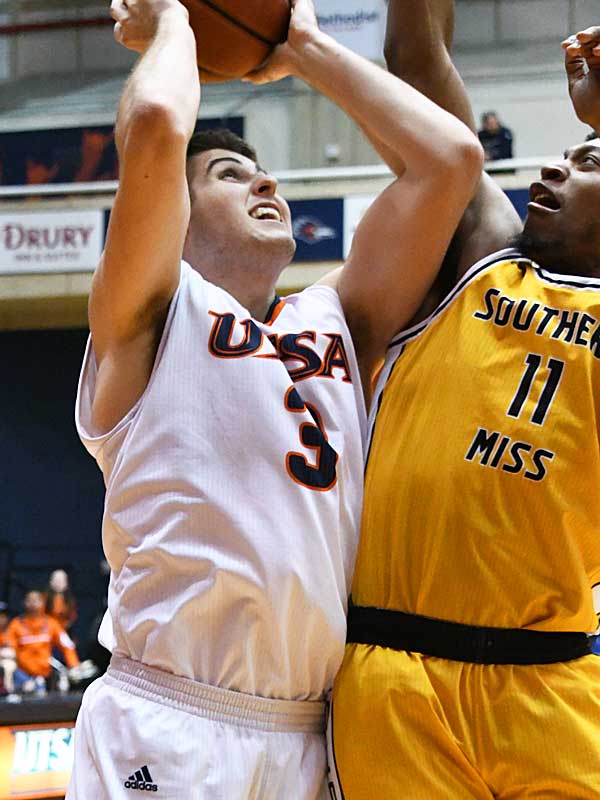 Byron Frohnen enjoyed another strong performance with nine points and eight rebounds as UTSA improved its conference record to 2-2. – Photo by Joe Alexander

The UTSA Roadrunners followed up their best game of the season with a victory, but it wasn’t nearly enough to satisfy coach Steve Henson.

Henson knows his team can play better than it did in downing the Southern Miss Golden Eagles, 80-70, Saturday afternoon at the Convocation Center. 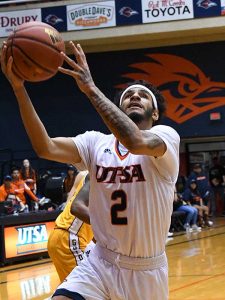 Jhivvan Jackson scored 23 points on 7 of 18 shooting after shaking off a pre-game knee issue. – Photo by Joe Alexander

UTSA buried 15 three-point shots to make up for other issues in a grind-it-out, tougher-than-expected performance against a struggling program.

“Well, to be honest, we didn’t feel great about our practice yesterday or our shoot-around today,” Henson said. “Wasn’t terrible. Wasn’t terrible. But, you can’t have one good game and feel like you’ve arrived.

“I don’t think our guys had conscious bad thoughts. But it was noticeably a little different. Didn’t jump ’em in practice or in the shoot around the way we maybe should have.

“But, you could tell, we just weren’t quite focused.”

On Thursday night, the Roadrunners played well for most of the game in rolling to an 89-73 victory over the Louisiana Tech Bulldogs, a team that arrived in San Antonio with a NET national rating of No. 59.

Against the Golden Eagles, rated No. 309, the Roadrunners had to scramble to win by double digits after allowing the lead to be trimmed to three twice, the last time with 6:28 remaining.

Fortunately for the Roadrunners, rated No. 209, they switched to a zone defense to thwart the Eagles at the end.

They also hit all eight free throws down the stretch, including six of six by Jhivvan Jackson, to put the visitors away.

Jackson, the second-leading scorer in the nation, produced 23 points and six rebounds to pace the Roadrunners. Keaton Wallace added 16 points and four assists.

Six players hit from deep, including little-used freshman Makani Whiteside, who made two of them in the second half.

UTSA travels to play at UTEP on Wednesday at 8 p.m. The two teams will play again in San Antonio next Saturday at 3 p.m.

UTSA's Jhivvan Jackson with the drive, the pump fake and the mid-range jumper. https://t.co/hyCDEtJ4sq pic.twitter.com/zSzkUDOEDc

Even with two victories in the past three days, Jackson endured a difficult week, in some respects.

In Thursday’s victory, he scored 37 points against the Bulldogs but tweaked his surgically-repaired knee on a fall in the second half.

Jackson said he was feeling it before the game against Southern Miss.

“My knee swelled up a little,” he said. “Other than that, once I step on that floor, it doesn’t matter what’s wrong with me. I’m going to play.

“We got the best trainer (Josh Modica) in the country. He helped me get loose. That’s why I got out here (for warm-ups) a little late.”

If physical pain wasn’t enough of a worry, Jackson also was concerned about family in Puerto Rico, where a series of earthquakes have rocked the Caribbean Island.

Jackson said his family is OK. “They didn’t have power for a couple of days, but they’re good now,” he said. “I mean, just taking it one day at a time.”

After a series of strong practices by Whiteside early this week, he was due for some additional playing time.

Though he did not get off the bench against Louisiana Tech, the 6-foot-4 guard from California logged eight productive minutes against Southern Miss.

He pleased the coach with his defense and with his shot-making, a 2-for-2 showing on three-pointers in the second half.

“Coming in I was expecting to play a little, so I just tried to stay ready,” he said.

Whiteside has moved up in the guard rotation in the wake of an injury to Adokiye Iyaye, who is out 6-8 weeks with a broken right thumb.

He had to come out so that trainers could stop the bleeding. Diagnosed with a broken nose, Czumbel did return to the game wearing a protective mask and even hit a three-pointer out of the corner.

Henson said he should be able to continue to practice and play.

Playing patient basketball, the Roadrunners built a 35-31 first-half lead. But in many respects, it was an uninspired showing, with the Golden Eagles out-rebounding the Roadrunners 17-12. Of the 17 boards, the visitors pulled down five on the offensive end.

Wallace kept UTSA ahead on the scoreboard by nailing five shots, including four threes, to lead the Roadrunners with 14 points. Jackson had 12.

The Roadrunners weren’t quite right in the second half, either, giving up 48 percent shooting from the field. They also were foul prone, allowing the Golden Eagles to hit 14 of 16 at the line. But on offense, UTSA had much better balance, with nine different players scoring and five players making threes. Whiteside and Czumbel made two each.