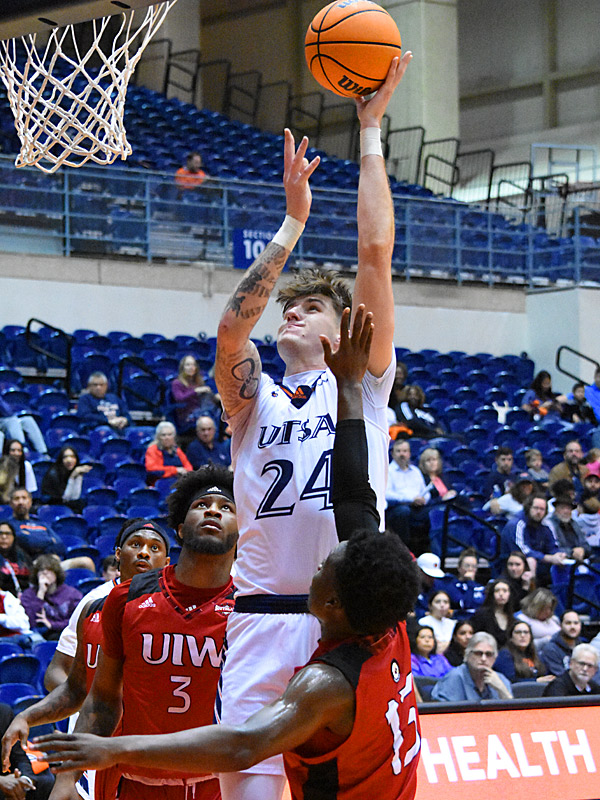 UTSA senior Jacob Germany has joined the school’s 1,000-point club. He’s got 1,027 for his career. Germany muscled for 15 points and 11 rebounds against Incarnate Word.
– Photo by Joe Alexander

The UTSA Roadrunners rebounded from two tough losses to win in the finale of the 210 San Antonio Shootout, riding a double-double from senior Jacob Germany to a 68-62 victory Monday night over the University of the Incarnate Word Cardinals.

After the Cardinals pulled to within three points in the final minute, Germany, a 6-foot-11 center, sealed the victory for the Roadrunners by hitting three of four free throws. He finished with 15 points and 11 rebounds.

It was a redemption victory for the Roadrunners, in a sense, considering that they had entered the Shootout last week riding a three-game winning streak and then had been humbled, losing by 20 to Grambling State on Friday and by one in overtime to Dartmouth Sunday. 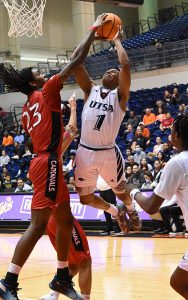 UTSA’s Japhet Medor is met at the rim by UIW forward Stephon Payne III. Medor, who twisted an ankle Sunday night, played through some pain in Monday’s finale of the 210 San Antonio Shootout. He produced 11 points and three assists. – Photo by Joe Alexander

Because of the possibility that they could have been swept at home in their own multi-team event with a loss to UIW, Germany acknowledged a certain tension in the locker room before the game tipped off.

“We obviously kind of had that chip on our shoulder,” he said. “We obviously wanted to keep our little winning streak going, to not lose at home. But coach said after the game (Sunday) that it’s hard to win games, especially when any team can get hot, whenever.

“So, going into the game (tonight) we were kind of upset. But I don’t think that affected completely how we played. Obviously, we were going to play hard, because we wanted to win.”

In the first meeting between the only two NCAA Division I basketball programs in San Antonio, UIW more than held its own. The Cardinals built a lead to four points once in the first half and then went on a 10-0 run early in the second half to go ahead by two.

But in the end it was Germany, Japhet Medor and John Buggs III coming through with clutch plays to give the Roadrunners San Antonio bragging rights, not to mention their fifth victory overall in eight games this season.

“It just felt good to get the win,” UTSA coach Steve Henson said. “We talked about that a lot. We walked out of here last night and, one play goes the other way and our mood is different, our lives are different.

“It doesn’t change the way the game was played but the effect of winning and losing on your mentality is pretty large. So many games, (it comes down to) one play. This ball game, it got real close at the end. If we hadn’t found a way to win we’d be sick right now. So it felt pretty good.”

It felt good in another way, as well. UTSA discovered that it can win Division I games with others besides Medor playing well on the offensive end. Curiously, the Roadrunners’ growth came about after the 6-foot senior from Florida turned an ankle Sunday night.

As Medor struggled, playing most of his 19 minutes after the injury early in the game against the Big Green from the Ivy League, Germany got himself going and scored a season-high 27. 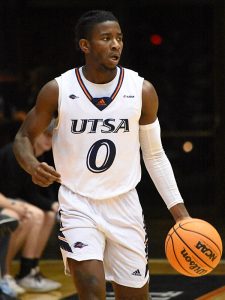 Germany on Monday continued to play aggressively against the Cardinals, taking 14 shots and hitting six of them. Of his 11 boards, four were on the offensive glass.

In addition, Buggs played efficiently, scoring 14 points on five of seven shooting, and others such as Josh Farmer and Aleu Aleu looked much more comfortable and in synch than they did against Grambling or Dartmouth.

Meanwhile, Medor battled through some discomfort in the ankle to score 11 points against the Cardinals, eschewing his drives to the bucket to step back occasionally and take an open three. In fact, he knocked down two of them.

As the Cardinals made a run at the Roadrunners down the stretch, Henson said he remembers Buggs and Medor in the mix, helping their team win.

“There were a lot of drive and kick opportunities there,” Henson said. “I felt like Buggs and Japhet knocked a couple down. Japhet, we ran a set for him to get to the rim. He tried to go in a couple of times, going into bodies, hoping to get foul calls and wasn’t getting them.

“But then we ran a nice set for him to get downhill and finish with his right hand. That was a big bucket for us.”

Forward Davante Davis did most of the damage for UIW, exploding for 22 points and seven rebounds in nearly 29 minutes. Point guard Jonathan Cisse hit four 3-point shot and finished with 19.

Guard Brandon Swaby also made an impact, hitting four of seven shots for eight points. He dished out three assists and had five rebounds.

Henson credited UIW coach Carson Cunningham for leading the Cardinals to two wins in three games at UTSA this weekend.

“He’s doing a really good job,” Henson said. “They had a great game plan this week. They were very well prepared. They play to their strengths. They tried to neutralize their opponents (with) their defense, it’s real active at times.

“It’s a real credit to them. They came in here and played great.”

UTSA beats the press in the final seconds of the first half, leading to a layup on the other end by Jacob Germany. Roadrunners lead the UIW Cardinals, 32-26, at intermission. https://t.co/hyCDEtJChY pic.twitter.com/riDxTW4Onj

Stung by losses at home to Grambling State and Dartmouth over the past three days, UTSA came out with a determined focus in the first half. Jacob Germany, Erik Czumbel and John Buggs III played well and helped the Roadrunners forge a 32-26 lead on the UIW Cardinals at the intermission.

Germany had six points and six rebounds in the half. Czumbel came off the bench and scored five while passing for a couple of assists. Buggs bounced back from a poor shooting night on Sunday against Dartmouth to hit both of his shots, one of them a three. The UTSA newcomer also finished the half with five points.

For UIW, guard Jonathan Cisse had eight points to lead the Cardinals, who had come into the UTSA game having knocked off both Dartmouth and Grambling.

After hitting for 27 points on Sunday and another 15 on Monday against UIW, the senior from Kingston, Okla., has now amassed 1,027, passing Steve Meyer (1,001) and tying LeRoy Hurd for 16th on the school’s all-time list.

The University of the Incarnate Word is a newbie in NCAA Division I, as this is only the university’s 10th season at the top level.

Known originally as the Incarnate Word College Crusaders, the school started as an NAIA athletics program in the 1980s and moved into NCAA Division II in the 1990s, and then into Division I and the Southland Conference in 2013-14.

After four seasons of transition to Division I through 2016-17, UIW has been eligible for national postseason play for only the past five years.

In that time, the women’s basketball team made the NCAA tournament once — last season. But the men have yet to reach the NCAA’s Big Dance.

UIW coach Carson Cunningham, in his fifth season at the school, entered play Monday night with a 34-89 record.

Davante Dennis takes it inside to score for the UIW Cardinals. https://t.co/hyCDEtJChY pic.twitter.com/IGbtlVsREx