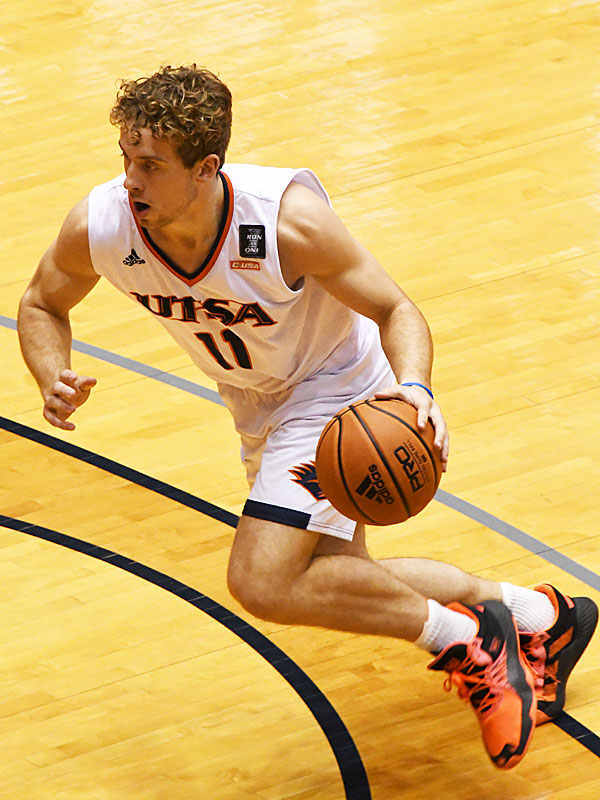 On their best days over the past three years, the UTSA Roadrunners have been a nightmare for their opponents, playing at a dizzying pace, shooting three-pointers from all angles and distances, and generally ringing up numbers that leave everyone aghast.

The best of those days came in the 2017-18 and 2018-19 seasons, when the Roadrunners seemed particularly hard to handle. Both years, they won 11 and lost 7 in Conference USA. They evolved into a team that opponents didn’t really want to see on a Saturday afternoon in San Antonio.

Last year, the dynamics started to change. Opposing teams started to figure out that UTSA could not win consistently even on nights when guards Jhivvan Jackson and Keaton Wallace raced off on mind-boggling scoring binges.

As a result, Roadrunners coach Steve Henson made some changes of his own. In spite of challenges presented by the pandemic, he started out a few months ago determined to mold a team that played tougher defense and made opposing teams think about guarding six or seven players — not just two.

So far, the transition remains as a work in progress. As UTSA (2-2) prepares to tip off today at Oregon State (2-3) of the Pac-12 Conference, the Roadrunners have yet to beat anyone in NCAA Division I with two weeks remaining until the start of the C-USA campaign.

In their two games against D-I opponents, they’ve been outscored by a combined average of 93-65.

“We’re not where we want to be,” Henson told reporters Monday. “We’re not where we need to be if we’re going to win a lot of ball games. We recognize that. That’s OK. You know, if we were playing at a high level, we’d still be trying to get better. (We) told our guys that. It doesn’t really matter where we are at right now. We got to get better today.”

The game against Oregon State is their first in 12 days. They last played on Dec. 3 and 4, when they lost by 39 points at Oklahoma and then returned home on short rest and weary legs to drill Division III Sul Ross State by 29.

“Oregon State is a Power Five program. We’ve got to go up there and give ourselves another opportunity to win a ball game against a Power Five. I think our guys are prepared to do that. I think they’re excited. But we’re still trying to figure some things out.”

From the beginning last summer, Henson and his staff insisted that the Roadrunners needed to become a better team defensively to succeed. He said recently that it’s also time for the offense to start clicking.

“You know, if you go down the list right now, we don’t have too many guys that have played anywhere near where they can on the offensive end,” the coach said. “There’s a couple of exceptions. Erik Czumbel is playing very well, shooting at a high level. Lache Bofinger, a freshman, he’s been fantastic.

“But we’ve got a lot of other guys who are capable of doing a lot more offensively. We’ve got to pump them up with confidence. We got to defend harder. We got to play with better effort. We need to rebound more physically. We haven’t played with a lot of confidence on the offensive end.”

In road games at UT-Rio Grande Valley and Oklahoma, the Roadrunners have seemed particularly out of kilter on the offensive end, shooting 37.8 percent from the field and 24 percent from three. Also in those two games, their assist-turnover ratio has been a sub-standard, 23-31, including 6-18 against the Sooners.

“Each guy (Jackson, Czumbel and Wallace) gives us a little bit of something different,” Henson said. “We want to involve Jhivvan in a lot of ball screens in this next ball game. Again, he does as good a job of anybody on the roster of pitching the ball ahead. In the half court, regardless of whether he’s the point or the off, Keaton’s getting good penetration, getting down in the paint. Those three guys are going to be fine.”

With Jackson and Wallace, their shot attempts per game are down from years past as the Roadrunners try to become a more well-rounded offense. The coach said he likes how his two mainstays have tried to play unselfishly, to make sure that others are getting involved.

“They’re struggling a little bit in when to defer and when to take over,” Henson said. “We all know … we cannot be a two-man show. We need somebody else to step up. But there are still times when those guys need to go and be special. You know, go out there and be one of the best backcourts in the country. They’re capable of doing that. They’re capable of taking over stretches. We got to find that balance with them.”