Undaunted by a burgeoning pandemic that has affected some of the most powerful college basketball programs in the nation, UTSA plans to travel to the Northwest on Tuesday with the idea of playing the Oregon State Beavers in Corvallis on Wednesday afternoon. 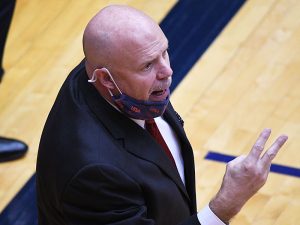 Coach Steve Henson and the UTSA Roadrunners are expected to play at Oregon State of the Pac-12 Conference on Wednesday afternoon. — Photo by Joe Alexander

Roadrunners coach Steve Henson said his team is still working to correct some inconsistencies on the court.

But when asked in a Zoom conference with reporters Monday if his team has had any tests come back positive for the Covid-19 virus in the past few weeks, he said all recent tests have been negative.

“We’ve been all negative for quite some time,” Henson said.

Over the past 10 days, Gonzaga and Baylor, the top two teams in the nation, have had to scrap games because of Covid-19 issues. Duke coach Mike Krzyzewski has called off the rest of his non-conference schedule.

Most concerning, Keyontae Johnson, a returning All-Southeastern Conference player for the Florida Gators, remains hospitalized and in “critical but stable condition” after collapsing during a road game at Florida State on Saturday afternoon.

Henson said his program is monitoring events daily, and he is prepared to follow whatever medical guidance he might receive.

“I wouldn’t have been surprised if at any minute someone hadn’t stepped up and said, ‘All right, we’re not going to play non-conference games,'” he said. “Obviously we’re all following very closely the Keyontae Johnson situation, the kid from Florida.

“You know, that may or may not have some impact on some decisions as we move forward. Very concerning situation there. We’re all thinking about that young man and praying for him.

“Coach K, I believe, was one of the coaches early on saying we shouldn’t start (the season) until January. So there was a lot of that conversation going on early in the season, that we should cancel non-conference games. That we should push everything back.

Henson said he talked to Oregon State coach Wayne Tinkle “four or five weeks ago” about the game.

“I had read some things that Portland State had been shut down (and) I didn’t know if that would affect Oregon and Oregon State, or anybody else up there,” he said. “So I called him and at that point, (we) felt good about it (and) just kept monitoring it. As long as we kept seeing them play games, we felt good about it.”

Playing at home, UTSA downed NCAA Division III Sul Ross State 91-62 on Dec. 4 to forge a split of the first four games on the schedule. Both losses have come by double digits on the road against Division I competition, including a 39-point loss on Dec. 3 at Oklahoma. Oregon State has lost three straight, including an 87-86 home loss on Dec. 10 against the University of Portland, a member of the D-I West Coast Conference.