The Huskies had rallied to within five points with 6:26 remaining when Wallace went to work, scoring 13 during a 19-7 streak by the Roadrunners.

When it was over, UTSA held an 83-66 lead with a little more than a minute remaining.

Wallace finished with a season-high 24 for the Roadrunners (6-5) as they snapped out of a two-game losing streak.

Houston Baptist (3-7) played tough all night, even without starting center Josh Ibarra, who went to the bench two minutes into the game with an apparent ankle injury.

He did not return.

Coming off a road trip to New Jersey, where they played St. Peter’s on Wednesday night and then traveled most of the day Thursday, the Huskies forged a lead for 9:03 of the first half.

UTSA trailed by one when it constructed a 13-4 run in the final 3:42 leading into intermission. Frohnen scored six points in that stretch.

“It was kind of a choppy start,” UTSA coach Steve Henson said. “Kind of a choppy game, really. No flow. Couldn’t get anything going. Didn’t shoot it well early and turned it over a lot early.

“But, yeah, we never got our normal flow going. Other than the first half down in the Bahamas, that was the most dis-jointed we’ve looked all year.”

Henson applauded the play of Caraher, who hit 10 of 16 from the field.

“Obviously their freshman player, he killed us,” Henson said. “He’s a good player. He gave us fits.”

Fortunately for Henson, he had an answer in Wallace, a talented freshman lefty who connected on 7 field goals, including 5 of 12 from long distance.

“It’s like he does most nights,” Henson said. “Good player. He’s consistent. Every time he shoots, I think it’s going in. Sometimes I play him when he’s not making shots thinking the next one’s going in.”

Wallace said the Roadrunners knew they were in a “dog fight” late in the game with the Huskies, who play in the Southland Conference.

As a result, the Roadrunners clamped down on the defensive end and then started executing their inside-out game on offense.

“We practice that a lot,” Wallace said. “It’s like, drive and kick. Get to the paint, kick, because, we got a lot of people that can shoot.”

Houston Baptist senior Will Gates, Jr., got off to a fast start with eight points in the first half.

Jalon Gates, his younger brother, came off the bench for the Huskies and was limited to just two points on 1 of 5 shooting.

Afterward, the two brothers and former standouts at Clemens High School met with family and friends in the foyer of the UTSA Convocation Center.

Will Gates, Sr., the players’ father, is a former Chicago playground basketball legend who was featured in the critically-acclaimed documentary, ‘Hoop Dreams.’ 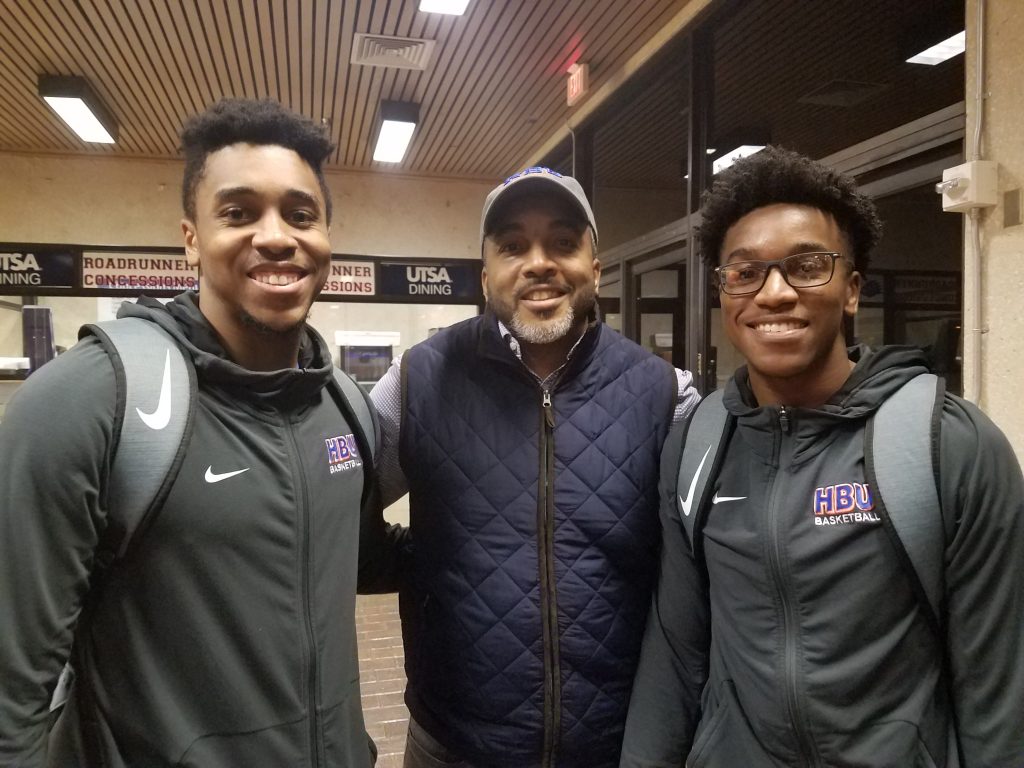 Will Gates, Sr., with sons Will, Jr., (left) and Jalon (right) after Saturday night’s game at UTSA. Photo: theJBreplay.com