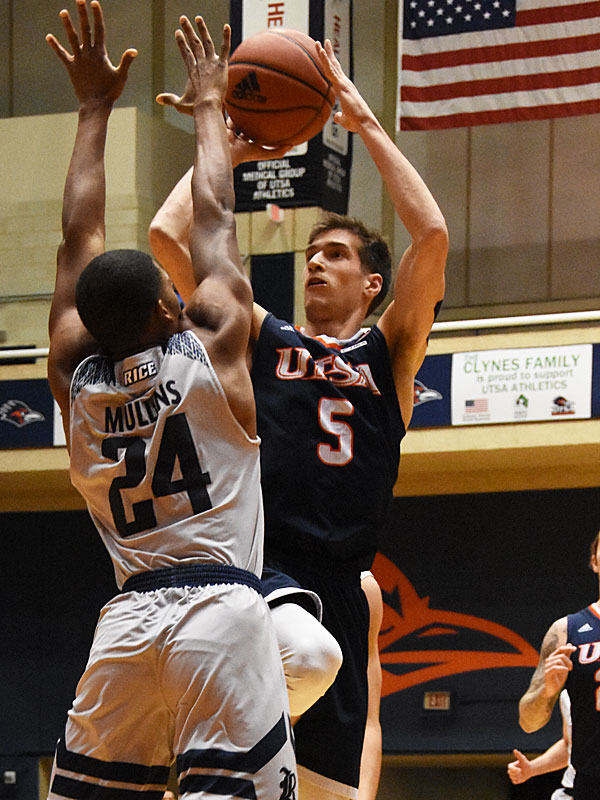 Junior guard Giovanni De Nicolao broke out of a shooting slump by scoring a season-high 19 points, to go along with 7 assists, in a 16-point victory against Rice. – Photo by Joe Alexander

The UTSA Roadrunners cranked up a high-energy offense Thursday night, rolling past the Rice Owls, 95-79, for their sixth straight win.

UTSA’s winning streak is the team’s longest in three years under Coach Steve Henson and the longest overall since 2010-11, when the program last qualified for the NCAA Tournament.

In addition, the Roadrunners improved to 3-0 in conference for the first time since 1990-91, when they won the Trans America Athletic Conference regular-season crown.

UTSA will try to match that start on Saturday night when it hosts the North Texas Mean Green in a game between in-state rivals, both undefeated in Conference USA.

Against the Owls, Jhivvan Jackson led the Roadrunners with 24 points, and Nick Allen had 20. Giovanni De Nicolao produced 19, while Keaton Wallace had 16.

Allen and De Nicolao hit individual season highs in scoring on a night when the Roadrunners also notched the most points in a game this year against a Division I program. 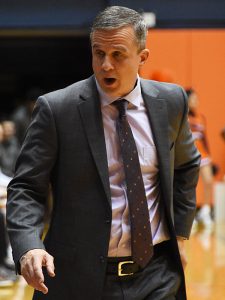 In the locker room afterward, Henson congratulated the players on reaching a goal of making fewer than 10 turnovers — they had eight.

But perhaps the story of the night indiviually was De Nicolao, a junior guard from Italy, who entered the game shooting 31 percent from the field and 10.9 percent (3 of 29) on three pointers.

“Finally,” De Nicolao said. “Lately I haven’t been shooting well. My three (point) percent is awful. Finally I got some shots (to go in).”

De Nicolao hit 7 of 13 from the field and 3 of 6 from long distance. On one of his threes in the second half, UTSA fans were chanting, “Mama Mia,” in a salute to his Italian heritage.

He also saw some fans giving him an Italian hand gesture, with the thumb pressed against fingers, which De Nicolao also enjoyed.

“It doesn’t really mean anything. But everyone in America thinks it’s something. I don’t know. It’s fun. I like it.”

The Roadrunners unleashed a fast-paced offense and multiple shooters en route to a 46-37 lead at the intermission.

It was UTSA’s highest-scoring half since Dec. 17 when they hit for 56 against NAIA Bethany, Kansas.

De Nicolao had perhaps his best offensive half of the season with 12 points on 4 of 6 shooting, including 2-for-2 on three-pointers.

Rice entered the game with some momentum, having won back-to-back games at home against Southern Miss and Louisiana Tech.

The record for the longest winning streak in school history? It’s 13 games, which was established in 1983-84, in the third year of the program.

Asked whether UTSA could score 95 every night, Henson said, “Well, there were some reasons for it that I was excited about. The 95 points didn’t really mean anything. But the limited turnovers — we had been talking about that for weeks and weeks … We got a team that plays fast and aggressively, but that doesn’t mean we’ve got to turn the ball over. So, finally, tonight was the night (with eight, and 22 assists).”

UTSA sophomore Jhivvan Jackson, who entered the night as the second-leading scorer in C-USA, hits a jumper late in the second half over Rice big man Jack Williams. Jackson sank 9 of 23 from the field, 3 of 10 from three and 3 of 3 on free throws.