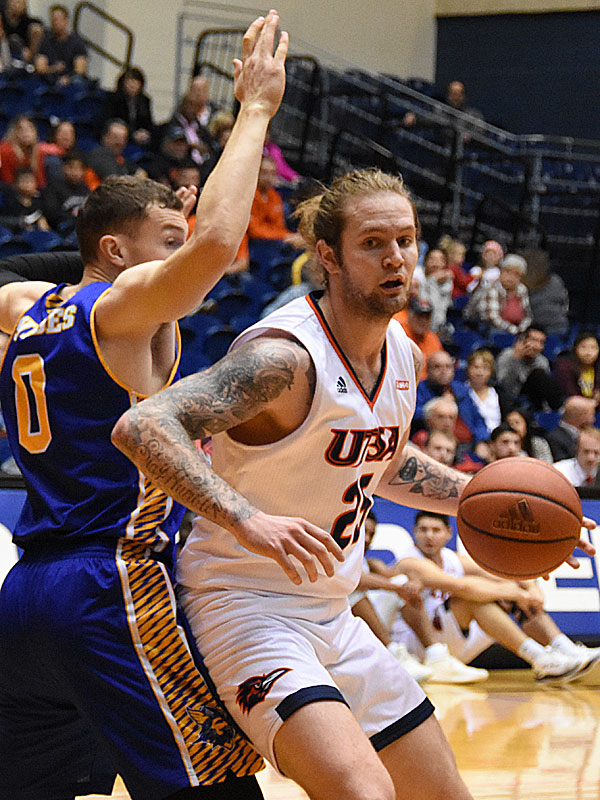 UTSA’s Nick Allen played with a sore foot but recorded 12 points and 8 rebounds in 18 minutes in the Roadrunners’ 101-77 victory over Bethany on Monday, Dec. 17, 2018 at the UTSA Convocation Center. – photo by Joe Alexander

The UTSA Roadrunners enjoyed the feeling of a 101-77 victory Monday night over the Bethany College Swedes.

A dozen Roadrunners played and 11 of them scored, as they kicked the lead up to as many as 33 points in the last few minutes at the Convocation Center.

In the aftermath, however, UTSA senior Nick Allen said he recalled a different mood in the dressing room at halftime.

It was a foul mood, in some respects.

Players were mad that they led the NAIA program from Lindsborg, Kansas, by only eight points.

Coach Steve Henson was upset about it, as well, and he let the players know it.

“He was just frustrated because I think he sees what the older guys are seeing,” senior forward Nick Allen said. “Man, we can be so good. Why are we not fulfilling our potential for 40 minutes?’ ”

In response, the Roadrunners clamped down on defense early in the second half to take charge on one end of the floor.

On the other end, they ran their offense well, at one time outscoring the Swedes 16-0 to build a 65-42 lead.

Bethany never got closer than 21 the rest of the way.

Guards Keaton Wallace and Jhivvan Jackson scored 23 points apiece to lead the Roadrunners. The two were aided by Allen, who produced 12 points and eight rebounds and Adokiye Iyaye, who added 11 points off the bench. Byron Frohnen scored 10.

“We felt good about the way we came out and started the second half. We had to get after ’em at haltime a little bit, which we didn’t want to do. We just didn’t quite have enough fight there in the first half.” — UTSA coach Steve Henson

Bethany is led by head coach Dan O’Dowd, a former UTSA assistant coach. Former UTSA center Edrico McGregor is a Bethany assistant. O’Dowd, who worked under the late Brooks Thompson at UTSA, served as the initial recruiting contact for Allen.

In addition, UTSA coach Steve Henson lived in Lindsborg when he was a toddler.

With his father an athlete and a student-teacher at Bethany, Henson recalled that he once wore a “Swede outfit,” complete with a “fake beard, a helmet and a fake sword.”

Jhivvan Jackson passes to Keaton Wallace, who soars for a first-half alley-oop slam.