New in The JB Replay: Forward Emmanuel Ewuzie and the St. Mary's Rattlers gave the UTSA Roadrunners all they could handle Monday night. UTSA won 66-59 in a game that mirrored most of the 13 others in a series that has spanned 38 years — down to the wire. https://t.co/hyCDEtJChY pic.twitter.com/aIOZVZIuo8

Coming off a 20-point loss to the Texas A&M-Corpus Christi Islanders, the UTSA Roadrunners entered their third game of the season Monday night needing a defensive spark, some solid execution on the offensive end and a quality shooting performance.

All of that, leading to a run-away victory, would have been nice. But in keeping with history in a rivalry that dates back nearly 40 years, the NCAA Division II-level St. Mary’s University Rattlers showed up at the Convocation Center with other ideas.

Division I UTSA survived a shaky start and a hand-wringing finish to polish off San Antonio-based St. Mary’s, 66-59. 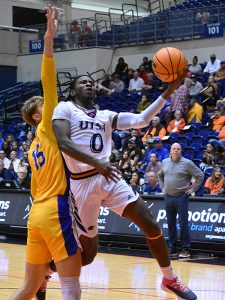 Fortunately for the Roadrunners, guard Japhet Medor, center Jacob Germany and freshman guard DJ Richards made a few plays at the end to salvage the victory. UTSA coach Steve Henson said in his postgame commentary that “there weren’t a ton of positives” to the performance.

“I can’t spin too positively,” the coach said. “St. Mary’s is good. I got a lot of respect for what they do and how tough they are. How well-coached they are. They did some things to keep it right there (within their reach).”

“The positive,” Henson added, “was that we found a way to get the win.”

St. Mary’s (0-2) played the game as an exhibition, so it didn’t count on the Rattlers’ record. But the game did count for UTSA (2-1) on a night when the Roadrunners were trying to bounce back from a poor performance in Corpus Christi.

Though the Roadrunners traveled to the Coastal Bend last Friday, it was hardly a day at the beach. UTSA held an eight-point lead in the second half on a 23-win, Division I NCAA tournament team from last year. After that, Corpus Christi romped 47-19 in the final 17 minutes to win 75-55.

As a result, Roadrunners guard John Buggs III fielded a few questions in the wake of the St. Mary’s game about the team’s inconsistency. His answer was the same. At times, he said, UTSA goes through “stretches” when things go wrong on both ends of the floor.

“We have to limit those windows,” Buggs said. 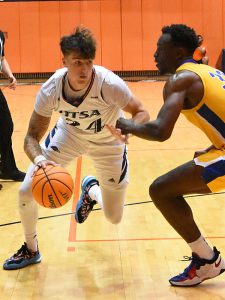 Jacob Germany sank 6 of 11 from the field and scored 14 points for the Roadrunners. John Buggs III also scored 14. — Photo by Joe Alexander

The Roadrunners, who were shooting 37.8 percent from the field coming into the night, finished 25 of 55 for 45.5 percent. Hitting only 20.3 percent from three in their first two games combined, they were better in that department, as well, making 8 of 19 for 42.1 percent. Germany and Buggs led the team with 14 points apiece.

It’s a good thing that UTSA made some improvement, because its next opponent — the defending Sun Belt Conference champion Texas State Bobcats — will be dangerous. The Bobcats are set to pay a visit to the Convocation Center on Thursday night.

“They’ve got a couple of really big challenges for us. The emphasis will be defending and rebounding. Offensively, we’re going to be a young work in progress. Still think we’ve got the potential to be a pretty good offensive team in time. Defensively, we’ve got to take some steps.”

For St. Mary’s, the game could serve as a springboard into the rest of its pre-Lone Star Conference schedule. The Rattlers were beaten twice in Colorado last weekend. They lost 87-65 to Colorado School of Mines on Friday and then came up short, 60-56, falling to Regis College, Colo. 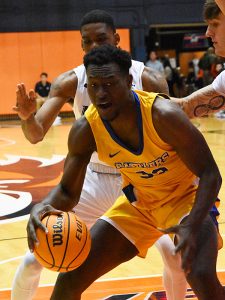 Against the Roadrunners, the Rattlers seemed to hit their stride. Forward Emmanuel Ewuzie had a big night with 14 points, six rebounds and four blocked shots. Guard Ryan Leonard finished with 11 points and seven rebounds. Off the bench, Diego Gonzalez scored seven and John Dawson six.

St. Mary’s came out strong, executing the offense and scoring the game’s first five points. The Rattlers kept it going for most of the first half, pushing the lead to as many as eight with 2:47 remaining.

At that point, UTSA started to creep back into the game. The Roadrunners scored seven in a row at the end of the half and then roared away on a 14-0 run to start the second.

Buggs ignited the second-half surge, hitting a couple of threes and a two. Forward Josh Farmer, who made his first start of the season, capped the streak with a wild play. After Farmer missed a dunk, Richards rebounded it. Farmer finally put it in the hoop for a 46-33 lead.

Down the stretch, the Rattlers wouldn’t fold.

They continued to scrap for rebounds and dive on the floor for loose balls. They hit some difficult shots in traffic. UTSA was also energized. They hit the boards with much more aggression. UTSA also got a big call when St. Mary’s foward Tyler Caron made a shot but had it waved off for charg

On the other end, Richards hit a three for a 10-point lead. Undaunted, St. Mary’s kept coming. The Rattlers chipped away and, with 1:01 remaining, Ewuzie hit a free that pulled the visitors to within two.

From there, Medor orchestrated the finish for the Roadrunners. He worked hard against the Rattlers’ trapping defense, and the Roadrunners survived, going on a 5-0 run to finish the game. Germany knocked down a shot and hit a free throw. On a free-throw miss, Richards snared a rebound and was fouled, sinking both with 30 seconds left to seal it.

With the victory, UTSA improved to 11-3 all-time in the series against St. Mary’s. The series between San Antonio-based universities started in 1984 as the “Mayor’s Challenge Cup.” Played initially in a downtown arena in the 1980s, the games have always been close. Only four of the 14 games have been decided by margins of more than 10 points.

UTSA point guard Japhet Medor turns on the speed, takes it to the hoop and scores. https://t.co/hyCDEtJChY pic.twitter.com/uevs6SWHmj

Sabally to Aleu — for two

UTSA sophomore Lamin Sabally draws the defense and kicks out to Aleu Aleu for a first-half three. https://t.co/hyCDEtJChY pic.twitter.com/RU595TwrAx