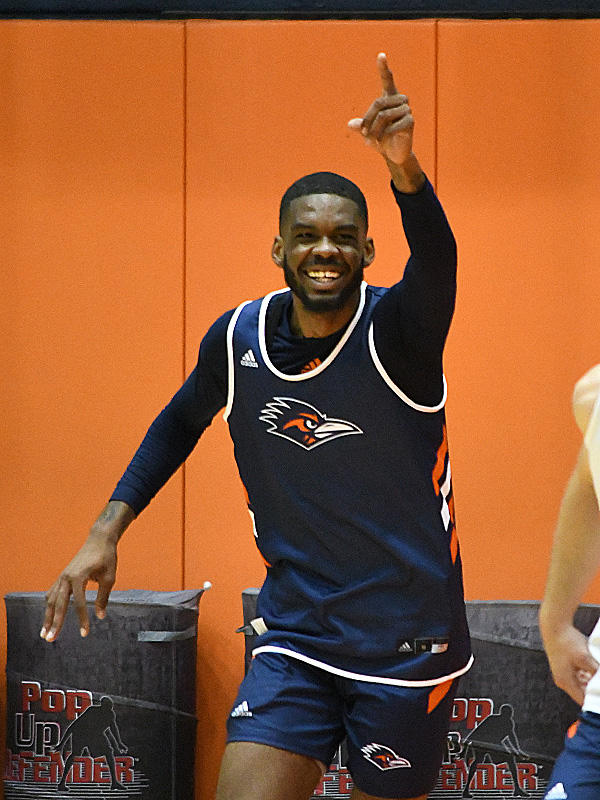 Hoping to rebound from last year’s season of discontent, the UTSA men’s basketball team engaged in an intense 2 and 1/2-hour practice Monday afternoon on the first day of full-session, preseason drills.

“I was not surprised that they came with great energy and excitement,” Coach Steve Henson said. “I was hoping (they) would. We’ve been together a lot. All but one (of the scholarship) players were here this summer. 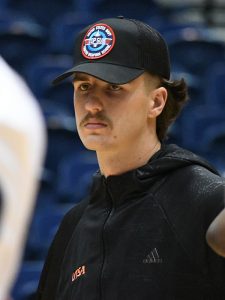 “(We) had a great summer,” Henson said. “Had four great weeks this fall. You always want your first official practice to have a different excitement level to it, and I think it did. They came in and played with great energy.”

Sitting out the practice were 6-11 senior Jacob Germany and 7-foot transfer Carlton Linguard, Jr. Linguard’s absence was expected. He’s been working back slowly from a left knee injury since he arrived on campus. With Germany, a medical issue surfaced last week.

After experiencing what was described as “discomfort” in his chest, the UTSA center sat out at least two practices last week. UTSA still hasn’t heard from a doctor on the results of tests conducted last Friday.

“He got the tests done late last week,” Henson said. “We’re still waiting. As soon as the doc gets a look at the results, we’ll have an answer. We were hoping to have that this morning. Just didn’t have it.

“Now we’re hoping for tomorrow. If we can get that, we’re hoping he can practice tomorrow, if everything goes well.”

Henson said he is optimistic about a positive outcome. Germany, who averaged 15.2 points and 7.3 rebounds last year, said he’s taking it “day by day” and hoping for a return in the next few days. 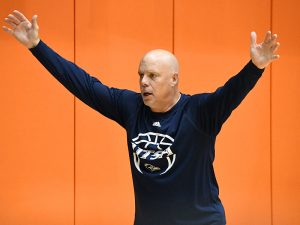 Coach Steve Henson said he liked the energy on the team’s first ‘official’ practice of the preseason. – Photo by Joe Alexander

Asked his level of concern, Germany was philosophical.

“Oh, it’s all part of the plan,” he said. “So I’m not concerned at all, whatever happens to me. We’ve got a great training staff here. The coaches are always in contact with them. We’re close to UT Health. All these factors are really good, so I’m not too concerned.”

In keeping with a trend from the last few weeks, a trio of players including Josh Farmer, Lamin Sabally and Aleu Aleu enjoyed strong practices.

Combined with continued steady play from backcourt newcomers Japhet Medor and John Buggs III, the Roadrunners looked as if they might have some potential — even though it’s extremely early — to bounce back from last year’s 10-22 record.

A lot, naturally, will depend on Germany’s status.

Also, Linguard is a key. When the Kansas State transfer from Stevens High School in San Antonio gets healthy, he can begin practice. To play, he’ll need clearance on an academics-related matter from the NCAA.

If all that happens, the Roadrunners could have the makings of a front line that could cause problems for a lot of the teams on their schedule.

“We could have a huge front line out there that could really help us,” Germany said.

Since June, the returning players and newcomers have worked out on most days for an hour or so. It was all tied to an NCAA rule restricting players’ time spent with coaches and staff to eight hours a week.

But from now until the start of the season in November, the Roadrunners will be allowed to work out for 20 hours a week, which will in turn translate to some long afternoons in the gym.

The increased workload in the first “official” practice of the new season didn’t seem to faze the players.

Henson said Farmer, a sophomore from Houston, enjoyed a big day on Monday. He was active on the boards, switched to guard players driving to the rim and generated some offense, as well.

Near the end of the session, he deflected a pass, gathered it in, and raced for a layup. Soon thereafter, Farmer hit a three pointer.

“Today, Josh really stood out,” Henson said. “He got a ton of reps because we were short-handed. So, Josh was terrific. I was most proud of him early in the practice. He missed a couple of threes, but then he went down and redeemed himself on the defensive end.

“He was flying around, blocking shots.”

As UTSA fall practice heated up on Monday, the chemistry between certain players was evident. Here, guard Japhet Medor passed to Josh Farmer for an easy bucket. https://t.co/hyCDEtJ4sq pic.twitter.com/4nXHQECjBF

Stymied by injuries last year, a healthy UTSA forward Aleu Aleu was on his game Monday, dribbling between his legs and then knocking down a perimeter shot. https://t.co/hyCDEtrt3Q pic.twitter.com/J1O7UZdDTn

UTSA sophomore forward Lamin Sabally (No. 20) drew a crowd on the drive, passed the ball to a teammate and then got it back for a wide-open three-pointer. https://t.co/hyCDEtrt3Q pic.twitter.com/R3RkIWaGRo